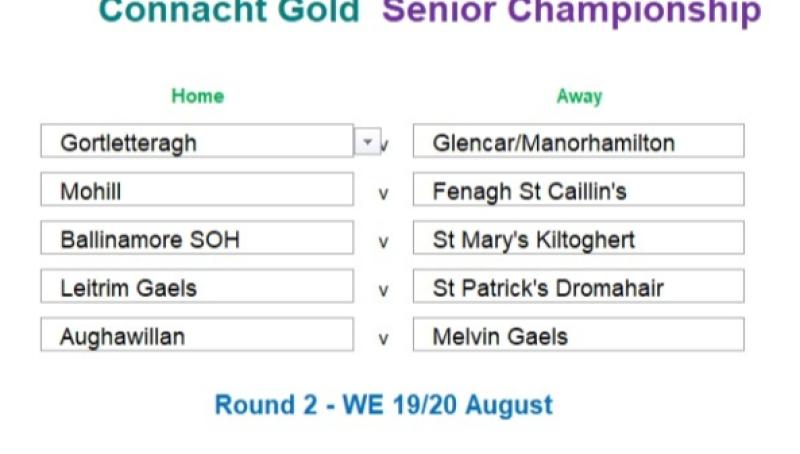 County champions Ballinamore Sean O'Heslins have been handed the prime draw of round 2 of the Connacht Gold Leitrim SFC when they were pitted against St Mary's Kiltoghert, the team that denied them a place in this year's Division 1 Final thanks to the head to head result.

In the draw on Sunday afternoon, there are some intriguing games in store with the equally intriguing derby clash of Mohill and Fenagh St Caillins another stand out tie. Both Mohill and Fenagh registered wins last weekend but the pressure will be on the likes of St Mary's who lost out to the League champions for the second time in six days last Friday.

Gortletteragh will host Glencar Manorhamilton, looking to build on their excellent win over Melvin Gaels, as the Manor men hope to get back to winning ways after their three point loss to Glencar Manorhamilton. Leitrim Gaels will be confident of picking up their second win of the campaign when they host St Patrick's Dromahair.

The final game of the round will be a great chance for Aughawillan or Melvin Gaels to get their playoff hopes back on track with the Kinlough men visiting Aughawillan.

The draw for the second round of the Connacht Gold SFC is as follows:

The Smith Monumentals IFC Round 1 ties that are also scheduled for next weekend are as follows.

CCC Liatroma will issue the official fixture list later this evening with specific dates and times of the above fixtures.