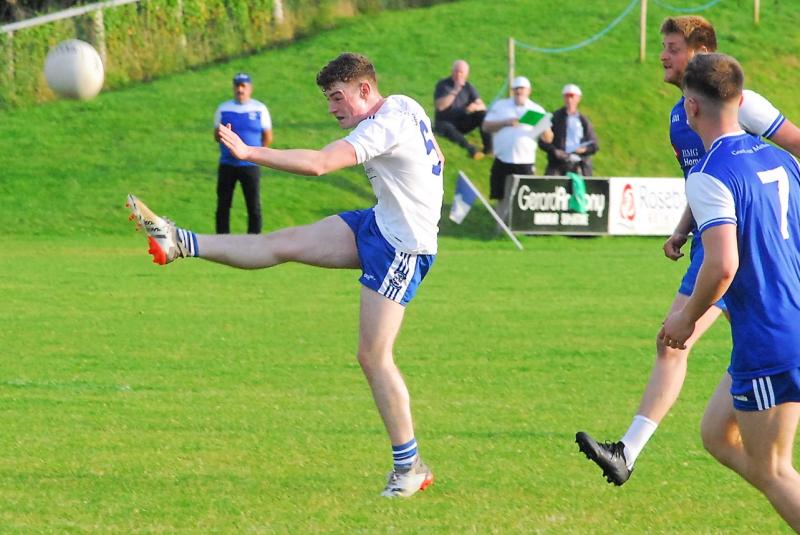 Leitrim Gaels secured their place in the Connacht Gold SFC quarter-finals while Aughawillan and St Mary's Kiltoghert took a major place to joining them in the top six places after an intriguing round of games in the Leitrim Club championships on Saturday evening.

The biggest drama came in Kiltubrid in the Smith Monumentals Intermediate Championship when the home team staged a late smash and grab raid when Kealan McKeon dispatched a penalty over five minutes into added time to take a dramatic 2-7 to 2-6 win over Allen Gaels while there were also big wins for Aughnasheelin, Drumkeerin and Annaduff.

In the Senior grade, Leitrim Gaels maintained their unbeaten start to the championship with a comfortable 2-17 to 0-10 victory over a battling but limited Gortletteragh. The win leaves the Gaels second in the table on scoring difference from Fenagh St Caillins and on course to book a place in the semi-finals with one round of the group stages still remaining.

Shaun Chandler and Enda Moreton both grabbed goals in the first half that gave a misfiring Gaels a 2-3 to 0-4 halftime lead as manager Paul Prior looked on bemused as his side kicked a succession of very costly wides. Whatever was said at the halftime obviously worked as the Gaels would go on to kick 14 points in the second half with Enda Moreton kicking some superlative efforts from long range.

Aughawillan won their huge battle with Glencar Manorhamilton 1-9 to 0-9 to move into fifth place in the table but it was a tight battle throughout. Morgan Quinn's goal three minutes before the interval proved to be the decisive score as the home team kept the north Leitrim men at bay to pick up their second win of the campaign.

In Pairc Naomh Mhuire, Conor Hackett's goal after just seven minutes got St Mary's off to a strong start against Melvin Gaels and the home side added two more goals before the break, Adam Reynolds and David O'Connell grabbing the majors as they led 3-7 to 0-3 at the halftime interval.

The Carrick men would add a further goal from sub Brian O'Donnell while the Kinlough men also grabbed a goal through Matthew Cleary as St Mary's recorded a 4-12 to 1-5 victory, a win that moves them into fourth place on scoring difference behind Ballinamore Sean O'Heslins.

In the Smith Monumentals Intermediate Championship, the big drama came in Pairc Cil Tiobraid as the home side defeated their neighbours Allen Gaels 2-7 to 2-6. The home team got off to a blistering start when Danny McWeeney goaled in the first minute and Kiltubrid led 1-6 to 0-3 at halftime but the Drumshanbo men got themselves back into it with a goal just after the break.

Kiltubrid were holding out but a goal on 19 minutes put the Drumshanbo men in front and they stretched their lead to two points approaching added time. However, there was one final dramatic twist in the tale when Kealan McKeon converted a penalty in the 65th minute to snatch a 2-7 to 2-6 victory.

That victory is Kiltubrid's first of the campaign while the Drumshanbo men, relegated from Senior last year, suffered their first loss.

Aughnasheelin continue to set a strong early pace as they proved too strong in the second half for Bornacoola. An early Ciaran Cullen goal put the home side into a 1-5 to 0-1 lead but a goal from Ronan Mulligan got the Bors back into contention as they trailed 1-8 to 1-4 at the break.

However, in the second half, Aughnasheelin took complete control with goals from Aaron Hoare and Fintan Fitzpatrick as they surged to a 3-15 to 1-10 victory that leaves them top of the table by virtue of a better scoring difference of plus 16 to Annaduff's plus 15.

Annaduff had looked in bother early in their contest with Ballinaglera as they trailed 1-7 to 0-6 at the halftime break and the scores were level with five minutes remaining in the contest. But two points from Joe Cox's side eased them to their second win of the grade on a 0-15 to 1-10 scoreline.

Drumkeerin also picked up their first win of the campaign when they had a hard fought 0-14 to 0-11 win at home over Mohill's second string. Ronan Kennedy kicked all but one of Mohill's points but with Francie Davitt and Cathal McCauley scoring well for the home side, Drumkeerin picked up a much needed first win.