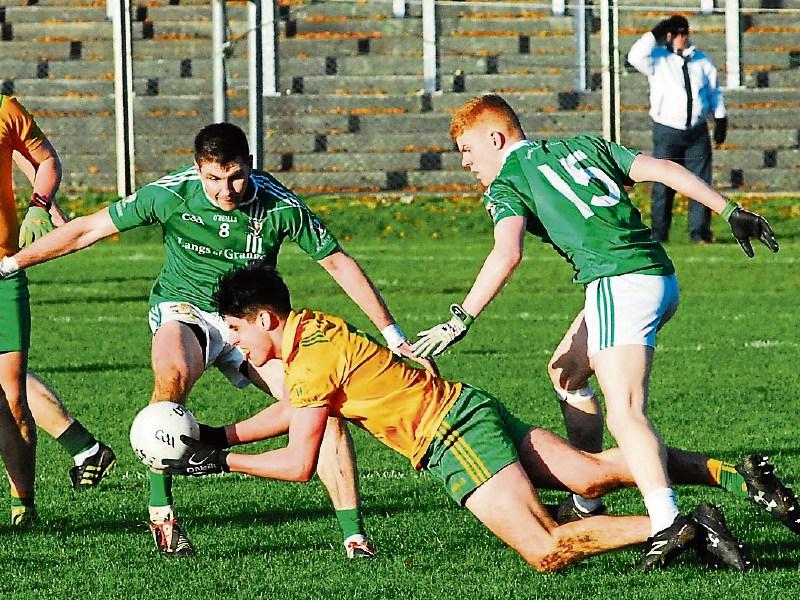 Donal Feely gets the ball away under pressure against St. Molaise Gaels in the Connacht Intermediate Club Semi-Final. Photo by Willie Donnellan

Lee Keegan may take the headlines but Westport are a team of many talents that Ballinamore Sean O’Heslin’s would be very wise not to underestimate.

With the Footballer of the Year in their ranks, Westport travel to Pairc Sean Mac Diarmada as favourites but in many ways, they are very similar to the team they face with a young team starting to come through the ranks.

Keegan, their undoubted star, is the oldest on the team at just 27 years of age while they boast three members of this year’s Mayo Minor team in Colm Moran, Paul Lambert and Oisin McLoughlin, three players who were key in their victory over Leitrim.

McLoughlin is a speedster but has been on the bench so far but Moran and Lambert are quality young footballers as is another forward Fionn McDonagh who got Man of the Match in the Mayo Final and hit three points in the Connacht Semi-Final.

Their one point semi-final win over Galway’s Monivea Abbey may not seem that impressive but the Mayo men may have been suffering the after-effects of three Championship games in just seven days to win the Mayo title.

Westport drew with Shrule Glencorrib on the Sunday, replayed on the Wednesday and three days later, still had too much power for Kiltimagh as they won 0-10 to 0-4.

Westport came through a tough game against Monivea Abbey but Lee Keegan was delighted that the Mayo champions ground out a result - “It wasn't the prettiest of games but the main thing is we got the result. People might say we didn't deserve it but honestly, that doesn't bother me because we got the result.

“It took us until the 60th minute today to win it but again that shows the trust that is within the squad and we have been building with a young team. It is good times for Westport, but listen, we have one more big test to go and it would be a nice way to end the year."

Mayo star Kevin Keane was also setting his sights on Ballinamore - “Yeah two weeks now I think we are playing the Leitrim champions. Obviously we will take the night off and enjoy a bit of a break.

“Come next week, we will be back into work again and hopefully get a look at the team we are playing and focus our minds but above anything else, it is about us and our performance that will be the most important thing and please God it will be good enough to get us over the line."

Freetaker Lewis Cawley said of next Sunday’s game “I am sure they are a quality team. We will get back to work next week and sit down for a talk about Ballinamore and we will see how it goes from there.”

The similarities with Ballinamore are striking as they were relegated back to Intermediate in 2014 and many in Mayo regard them as a stronger outfit than the Hollymount Carramore team who defeated Melvin Gaels last year and reached the All-Ireland Final, even if they have yet to produce their best form.

A hard team to break down, Westport are extremely young and very athletic and while their forwards are potent, quick and accurate, the defence is the bedrock of their success. Captain Brian McDermott alternative between midfield & wing-back with Keegan and along with Keane, Keelan Dever and James Walsh, Westport have very strong and mobile defenders who like to carry a lot of ball.

Westport’s attack, who boast Keegan’s brother Phil who is better known as a soccer player with Westport Utd, have been guilty of high wide counts in games but their quality of foot passing is excellent and when they move it quickly, they are extremely hard to stop.

The word appears to be that Westport regard themselves as team in transition but they have a record of rising to the big occasion.

Physically, Westport are an imposing side and players like midfielder Shane Scott and the extremely accurate Lewis Cawley give them real scoring potential and they will come to Pairc Sean with a belief they can win the Connacht title.