Anything can happen on the day as St. Clare's aim for glory 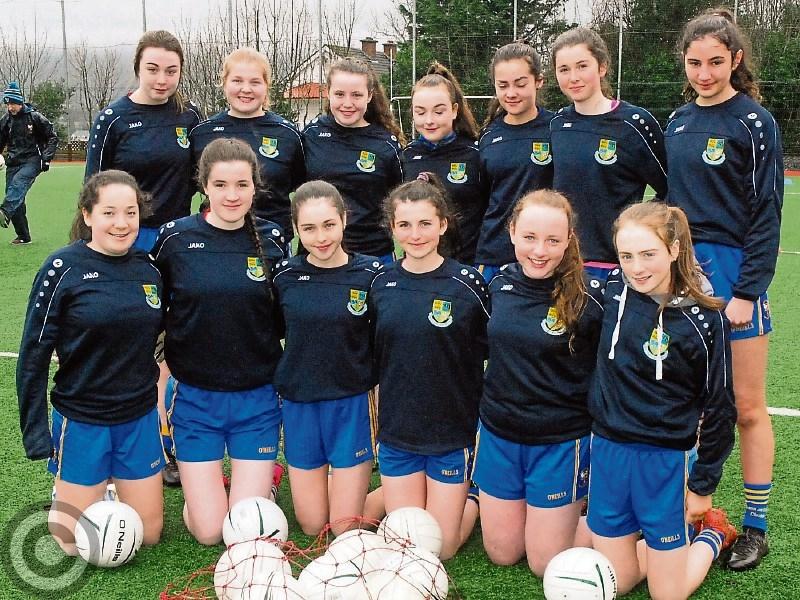 It may be the first All-Ireland Gaelic football appearance for the School but there is no doubt that St. Clare’s Comprehensive Manorhamilton are going all out for glory in next Sunday’s Lidl Ladies All-Ireland Junior C Final.

Up against a formidable St. Mary’s Midleton in the Final in Ballinasloe at 3pm, manager Danielle Nolan is nevertheless confident that her team can bring home a rare All-Ireland title - “It is a 50-50 chance with any game, anything can happen on the day, it is massive for the school.

And Danielle, who took over the team from Dympna Boylan, is confident the Manorhamilton girls have the ability to lift the title - “I think the win against St. Dominic’s in the semi-final, going up against an all-girls school who were highly regarded for the All-Ireland has boosted our confidence an awful lot.

“Our pick is a lot smaller but we keep telling them that attitude is the main thing, they have the skill, they have the ability so if they bring the right attitude to the Final, hopefully we will come out with a win.

Attitude is a key theme with the St. Clare’s management team of Danielle, James Glancy and Anthony McDonald and Danielle reinforces that view when she talks of opponents St. Mary’s of Midleton - “We’ve tried to look into them but it is really hard because you don’t know what the difference between Provinces is like.

“Obviously Connacht was extremely strong because if we said we were going to be in a Connacht Final against Ursuline, they would have been favourites after our first game. But we went up against a St. Dominic’s team and they walked through Ulster, Ulster would be known for having a high standard of football.

“So for us to come out of that game with such a good victory and we were always on top of them, it gave us a lot of confidence and the girls are going into the All-Ireland Final fairly confident. But you never know what to expect, especially in Ladies football. You could be winning by five or six goals and ten minutes later, it is a lot tighter.”

After winning two Connacht D titles last year, the decision to move the teams up a grade paid off handsomely for St. Clare’s “We decided to push both Senior and Junior teams up a level this year, give it a go this year and see how it goes. We started off ropey enough, we got absolutely thrashed by Ursuline earlier in the year and we ended up playing them in the Connacht Final.

“Everyone was a bit nervous after such a beating the first day but the girls really performed and pulled off a massive result against them. And we proved it wasn’t just a one-off because we went in against St. Dominic’s and beat them and they would have been one of the favourites.”

And Danielle paid tribute to the work being done in local clubs which ensures that the Ladies game is incredibly strong in the area - “The three main clubs that are filtering into us, Glencar/Manorhamilton is the biggest one, then Dromahair and my own club Shannon Gaels in Blacklion.

“The panel for this team was massive, we had to chop it down towards the end of the year so there are girls in the school who aren’t on the panel anymore. It is a massively young team, made up mainly of second and third years so it is nice to see them doing really, really well at this level of football.

“It just shows there is massive interest in the school in the sport and hopefully this will egg on those in the school who aren’t playing a lot of sport, to get involved because you can see that they really enjoy it, they are all really good friends and if you enjoy it, it makes a massive difference.