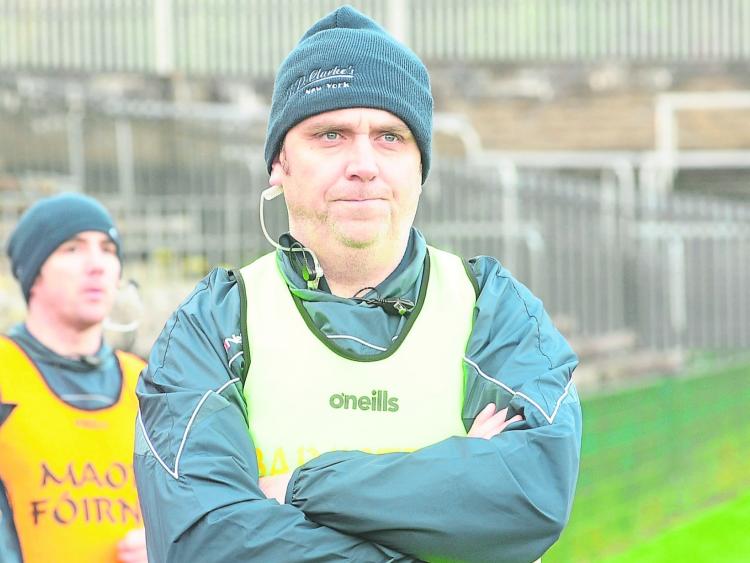 Last Sunday signalled the dawn of a new era for Leitrim hurling as new manager Olcan Conway took charge of the Lory Meagher Cup winners for the first time and he did so without a number of experienced players.

Leitrim ultimately slumped to a two point loss but even in defeat Olcan felt there were positives to be taken from the game from a Leitrim point of view.

However, despite those positives it was clear that Olcan was frustrated by the defeat, particularly his side's first half performance.

Speaking as he made his way towards the Brewster Park dressing room after the full-time whistle sounded Olcan said: “Any defeat is always hard to take but the lads came back in the second half. They worked very hard, they kept going and they fought very hard.

“We are very disappointed with our first half performance, we just didn’t get things right on the day.”

Before the sliothar was even thrown in, there was a feeling that things were off to a bad start from a Leitrim point of view. The traffic chaos in Enniskillen led to the start of the game being delayed while the extended warm-up resulted in some players picking up knocks that ruled them out of the game.

Referring to the less than ideal preparations Olcan said: “The referee delaying the match, getting caught in traffic, it all upset our preparations and then we had to make a few changes with lads getting injured in the warm up but it is what it is.

“The lads who came in played very well, they fought very hard. There are a few refereeing decisions that would be questionable but you never like to blame a referee for losing any match.

“We’ll take it on the chin and move on to the next game.”

Looking for turning points and decisive moments in the game it is impossible to look beyond the fateful minute shortly before half-time that saw Fermanagh find the Leitrim net twice.

Looking back on that period of the game Olcan acknowledged it was “a massive hammer blow.”

He added: “We didn’t protect the spaces very well but it is a young team and we have a lot of learning to do. It is a steep learning curve at this level and if you don’t learn quickly you fall behind.”

However, despite his frustration at the concession of those goals, he was able to spin it into a positive, of sorts, as it is something he and his team will be working on to ensure it doesn't happen again.

“Two goals in the space of a minute, that is something that we can work on for the future and try to protect that a bit better so that it doesn’t happen again.”

Another aspect of the game that would have frustrated everyone of a Leitrim persuasion was the manner in which Fermanagh slowed the game during the second half.

The fact that they were at a numerical disadvantage following the red card shown to Caolan Duffy shortly before the interval meant it was completely understandable that Fermanagh would try to stop Leitrim from building any momentum, but that didn't make it any less frustrating.

Referring to the Fermanagh tactics Olcan said: “They slowed the game right down, taking a lot of time over their frees and different things. They were clever, they got a man sent off just before half time. They were smarter with everything they did.

“Every free they had took about a minute and a half. Every time someone was tackled they were lying on the ground and slowed the game right down. It was very difficult for us to get our rhythm.

“It worked for them and I can’t complain about it, I suppose if we were in the same situation we might do the same thing. That’s life, you just have to learn from it and move on.”

Although disappointed and frustrated, Olcan remained upbeat and positive and insisted there is plenty for his side to work on ahead of their next outing against Cavan on Sunday February 16.

Elaborating on some of those positives Olcan said: “There are a lot of positives to take and we were missing four or five top lads with injuries and different things.

“We are hoping to have a few more lads back challenging on the panel for the next game against Cavan.

“There are four or five very good lads that know how to hurl that we were missing from the starting 15 and we are hoping to get them back in around the panel and keep moving forward.”

Do you have a smart device? Do you trust Google Home or Alexa to answer your children's questions factually and in their best interest?

Leitrim Mammy Diaries: Alexa, put the kids to bed and stick on the kettle