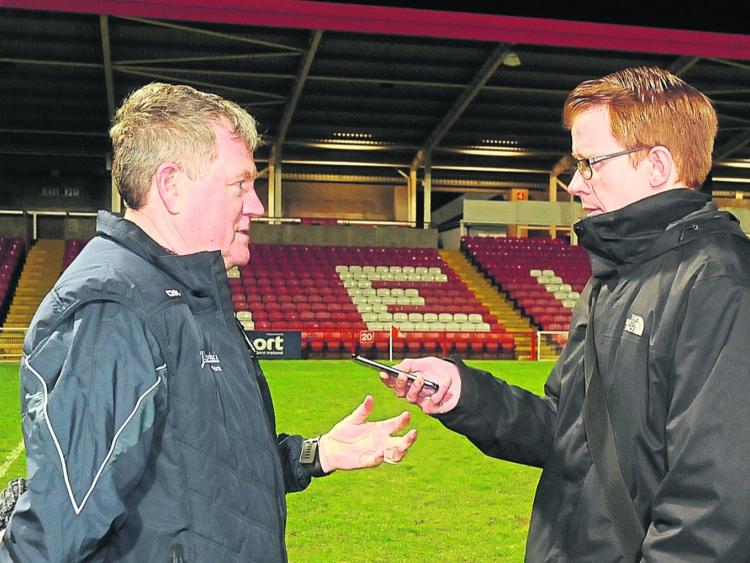 After the full-time whistle sounded in Celtic Park last Saturday night, the pitch was full of smiling faces as the Leitrim contingent mingled and celebrated.

The travelling supporters were jubilant, the players looked tired but thrilled while Leitrim manager Terry Hyland reflected on a game in which he felt his side were very unlucky not to emerge victorious.

Speaking in the aftermath of Saturday’s league opener Terry said: “I felt we were the better team. You probably heard us shouting a lot about patience. We gave away the ball sometimes when we didn’t need to. It’s a learning curve for these lads because in Division four you probably get away with that. In these divisions you won’t because someone else will gather the ball on you and put pressure on you.

“It is a learning curve and that is what we spoke more about at half time than anything and to be fair we didn’t do it as often in the second half. Our legs got tired and we were looking for the opportunity but sometimes you have to wait for the opportunity rather than look for it.”

Derry had been the red hot favourites going into Saturday evening’s game while Leitrim were billed as the red hot favourites for a quick return to Division four. Many of those predictions were based on Leitrim’s 30 point defeat at the hands of Roscommon but Terry insisted the FBD Connacht League had little bearing on his side’s preparations.

“It was always about today. We didn’t go out to take a tanking like that against Roscommon but it was always going to be about the National League.

“We knew we were down nine or ten starters, we didn't make an excuse out of it. We could have easily done what Donegal did and pull out of the competition but we said ‘no’. We have enough lads to wear that jersey, we’ll put them out and unfortunately we were up against a much stronger team on the day and that was it.”

Terry added he was particularly pleased with the reaction shown by his players to that defeat saying: “The reaction in training was much better than it had been from when we started because they hurt. Sometimes when you are hurt you push things in the right way.”

Returning his attention to the drawn game against Derry, Terry paid tribute to those on the pitch who produced a thoroughly enjoyable contest.

“I thought it was a very good game and I am sure all the supporters will go home happy because it was a great, open game considering the time of year. Conditions were good, there was a bit of a breeze alright but underfoot conditions were good and lads want to play ball and you get good games like that.” 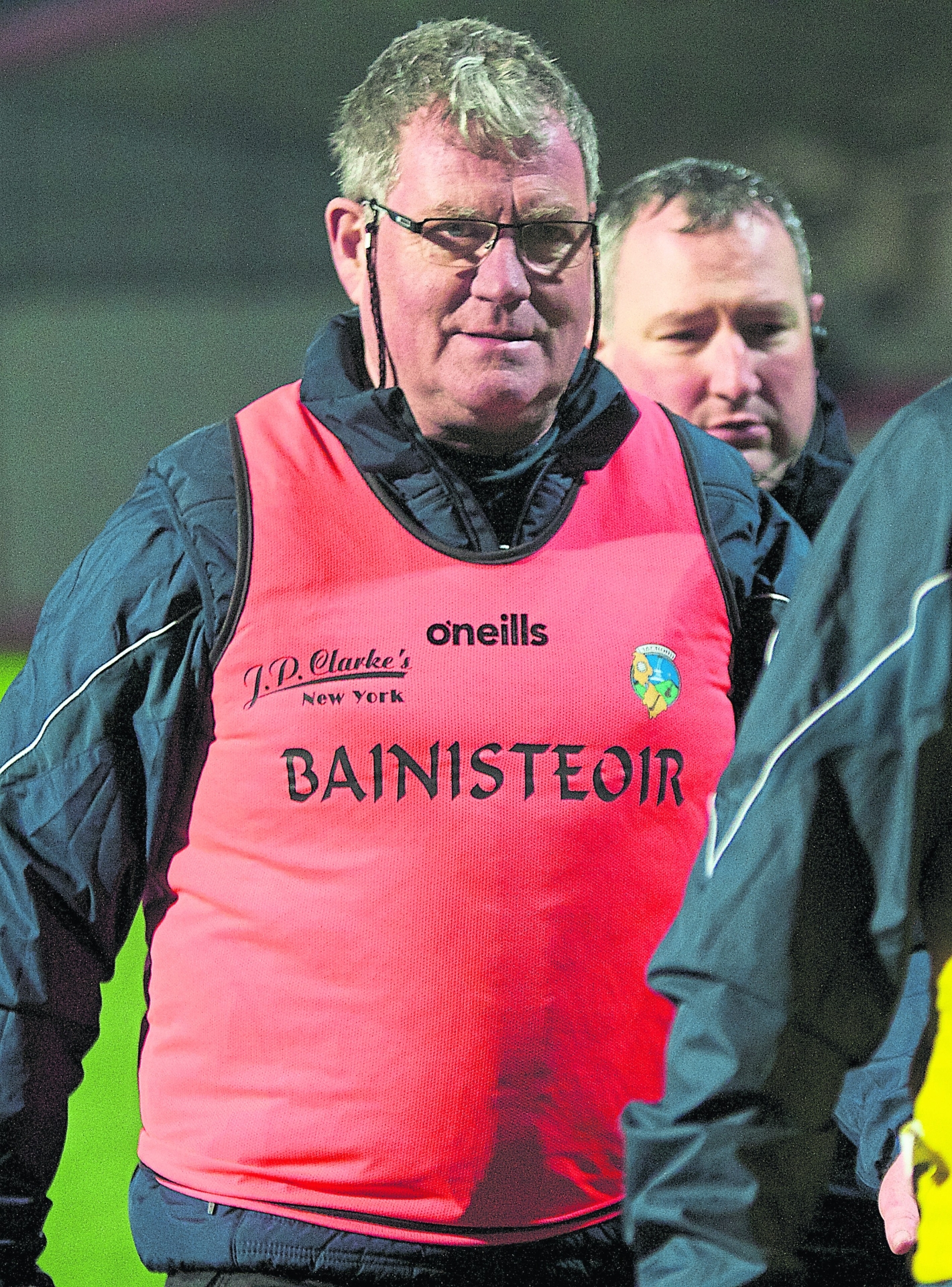 The free taking of Keith Beirne was one of the game’s main talking points, the Mohill man scoring 0-8 from placed balls with Terry quick to pay tribute to the returning forward.

“When you are under pressure people will give away frees, we gave away a few ourselves and that is what it is about. You have to put the backs under pressure and you only do that by kicking the ball into them. You have to be confident when you are doing that and to be fair to Keith Beirne his foot is very trusty and we kind of knew that coming in.”

One of the features of Leitrim’s performance was how clinical they were in front of the posts and how confident they were in possession, something Terry acknowledged they have been working on.

“That goes back to what I was saying about patience. This is what you have to do because sometimes young lads with young blood, it is all about rush, rush, rush. We are trying to pull them back on that and get it to the shooters and we have some very good forwards in Darragh Rooney and Keith Beirne and guys like that. They have great feet on them so why not work it in to them lads and then go for the opportunity.”

Although Leitrim and Derry met twice last year in Division 4, there is a new look to the Oak Leaf county this year and Terry acknowledged facing them on the opening day was advantageous for his side.

“Everybody would say Derry shouldn’t be in this division and that’s probably the true fact of it. They are a proud footballing county and to me they are probably a Division two team and always have been and never should be down where they are.

They are rebuilding, a new management comes in with new structures and they have to learn how to play with that. It was always a good time for us to get them on the first day.”

With some players still to return, the Leitrim bench was not as well equipped for the red hot action of league action as may otherwise have been the case but Terry insisted he had no hesitation in introducing young guns such as Riordan O’Rourke, David Bruen and Oisin McLoughlin.

“It’s tough on them but it is good for them because this is what they need to be at. This is the tempo they need to get up to. Unless you get them on in games like this they aren’t going to come on and they aren’t going to develop. Some lads will say you should have done this and you should have done that but that is my job to give them opportunities.”

For those who will be returning to fitness in the coming weeks, last Saturday night’s result means they will be returning to a camp where confidence will be higher than it has been in some time and Terry is hopeful this will only further aid his quest to create a squad with further depth.

“It is going to add to the pressure on them coming back and it makes it more competitive. This is what we have been trying to do from the start of the year is to build a panel. We are only a bit down the road, we probably won’t have a lot of them back until the third or fourth round of the league. There is a lot of work to be done with the lads that are there and the other lads will have to push up when they get the opportunity.”

Next up for Leitrim is the first home game of the campaign when they welcome Cork to Avantcard Pairc Sean Mac Diarmada, a game Terry is well aware will pose very different challenges for his side.

“The preparation will be no different than it was last week. As regards individual teams we will look at them and break them down and see where their strong points are.

“Cork will pose a totally different challenge for Leitrim. They are an open running team, big units running at you at pace. They also would be less defensive minded so that could create opportunities for our forwards but our defence will probably have to step up another bit.

“We have the toughest opening two rounds in the league. People will say at the end of the day it’s no different, you meet the strong teams at some stage you just have to be prepared for them.”

Read Also: Vote for your favourite Leitrim SNAPSHOTS - week one