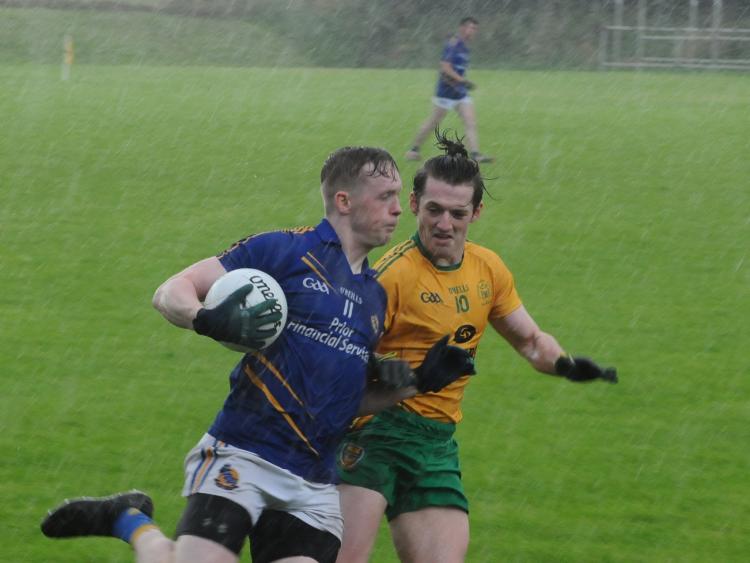 Ballinamore Sean O'Heslins and champions Glencar/Manorhamilton both scored three points win in tonight's round of Connacht Gold Senior Football Championship games to maintain their unbeaten starts to their campaigns.

Ballinamore beat out fierce rivals and three-time champions from the last eight years Aughawillan in a tense and hard fought battle, 0-10 to 0-7, the home team proving the stronger down the home stretch just as they did against Mohill last weekend.

Champions Glencar/Manorhamilton had a harder than expected encounter with Drumreilly who were making their first start of the campaign, winning 0-14 to 1-8 in Boggaun. The teams were level after ten minutes but Glencar/Manor started to pull away with a string of points from James Glancy, Niall Brady, Adrian Croal (2), Peter Poinard and Aaron Hickey to lead comfortably.

However, a Drumreilly goal from Peter Prior suddenly cut the gap to just three points and that was the way it stayed until the final whistle.

Mohill bounced back from their loss to Ballinamore to record a comfortable 13 point win over a St Mary's Kiltoghert team who slumped to a second loss in two outings. Mohill got off to a perfect start in Pairc Naomh Mhuire with a goal inside the first three minutes to go with two points.

The visitors led by four points at halftime, 1-7 to 0-6, but any hopes the Carrick men had of a comeback were swept aside when Mohill found the net for a second time inside the opening five minutes of the second half. St Mary's only managed one point in the second half as they already look in serious relegation trouble.

Melvin Gaels got back to winning ways with a hard fought 1-13 to 1-10 win over Allen Gaels in Kinlough. The home side led 1-8 to 0-4 at the break and seemed on their way to a comfortable win but the Drumshanbo side dug in and closed the gap back to a point, outing Melvin Gaels 1-6 to 0-5 in the second half.

The big game was in Pairc Sheain Ui Eslin in Ballinamore with the derby between Ballinamore and Aughawillan. Aughawillan cause in their first outing was not helped by the absence of Mark Plunkett and Ciaran Gilheany but the home side suffered their own misfortunate, Wayne McKeon not starting and Luke Murphy forced off inside the first ten minutes.

That meant Ballinamore were without their two chief freetakers and it showed as they missed some good chances although Shane Moran and Niall McGovern did show some accuracy from placed balls. The game was nip and tuck early on with never more than a point between the teams as Ballinamore led 0-4 to 0-3 at the break.

Crucially, Fergal McTague was black carded just before the break and it seemed as if Ballinamore were racing clear when they went three points clear inside the first three minutes of the second half while Shane Moran was denied a goal by a great save from Colin Maguire in the only real goalmouth action in the entire game.

Aughawillan fought back despite being a man down, closing the gap to a point before McTague returned. Ballinamore surged again with frees from Niall McGovern and Tom Prior but points from Morgan Quinn and Gary Plunkett seemed to suggest that Aughawillan were timing their push perfectly with ten minutes to go.

However, Ballinamore again finished strongest with a wonder point from Andrew Burns and another from Shane Moran to seal an important victory in a tighter and tenser match than they had against Mohill.

Ballinamore have a week off before they face St Mary's in the next round while Aughawillan also face St Mary's next Saturday in a game that could decide the relegation place in the group.

The full results from the Connacht Gold SFC are as follows: