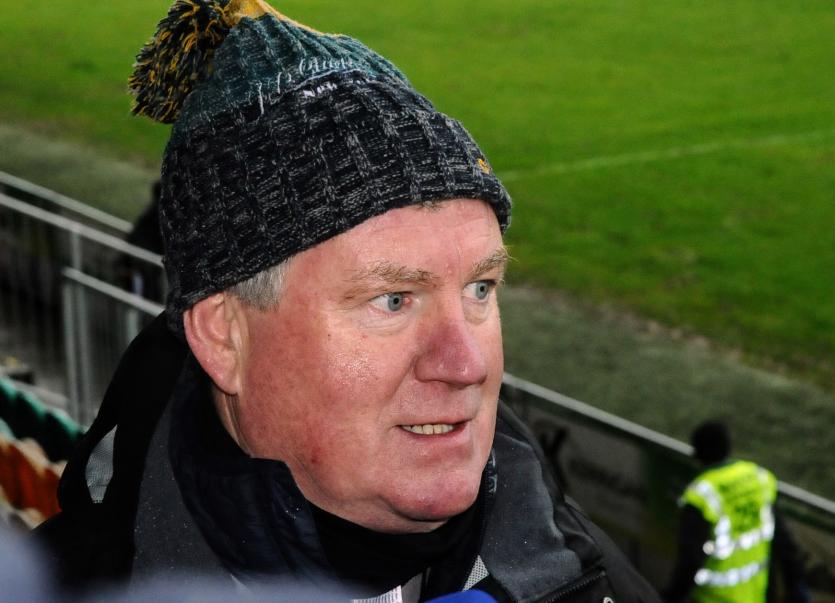 Calls from Leitrim players for him to remain with the Green & Gold in 2021 in last week’s Leitrim Observer played a part in persuading Terry Hyland to stay on for another year at the helm of the County Senior footballers.

There was widespread happiness in Leitrim footballing circles on Monday evening when Leitrim GAA County Board issued a statement confirming that Hyland would remain as manager of the Leitrim Senior footballers in 2021 along with his highly regarded management team.

There has been concern that Hyland was considering his future following his remarks to the media (Read HERE) after the 2-15 to 0-10 loss in Avantcard Pairc Sean Mac Diarmada but the County Board moved quickly to allay fears they would lose Hyland and reappointed him for the coming season.

In their statement, the Board said: “Leitrim GAA is delighted to announce that Senior Team Manager Terry Hyland has agreed to continue in the role of Senior Football Team Manager for the 2021 season. This evening’s meeting of Leitrim GAA Management Committee formally approved this position.

“Leitrim GAA wishes to thank Terry and his management team for the efforts they have made over the 2020 season, in what has proved a most challenging year, given the extraordinary set of circumstances that we have been through since last March.

“We are delighted to have secured the services of Terry and our outgoing management team and look forward to the continued progress of this group of players over the 2021 season.”

And Terry revealed to the Leitrim Observer on Monday that it was the pleas of the Leitrim players on our pages last week that persuaded him to stay on in the job!

Asked what changed his mind when it appeared he was set to leave the post, Terry said “To be honest, you were part of the catalyst because I saw the interviews you did with the lads gave to the paper (read HERE) and I thought they were very honest which is very unusual for this modern day.

“They were very honest in the game, they had been in the Tipperary match and that was the basis of it. I base everything in life on honesty and I’ve always believed that if you are honest off the field, you’ll be honest on the field and I will say that, the lads have been honest the last few weeks, they’ve worked hard.

“A new dawn and a new beginning. To be fair, even the communications I’ve had with some of the players after the game apart from the interviews they had given to you. And to be fair to them, it was better all around to have a continuity of management.”

Terry admitted too that personal relationships had played a part in his decision: “We try to put in structures in place that would help them as individuals and as footballers and we try to look after both sides of their lives, it is not just about sport.

“You do become close, it is about friendships on the back of that - I’ll not say we’re close friends, we don’t want to be close friends because it doesn’t work that way but we do try to help them out with other things in their life apart from their football life as best we can.”

Looking ahead, there are challenges but also bright spots: “We don’t know when the League is going to start which is probably another bigger issue, we don’t know where we’re at but talk of a vaccine these days will probably speed the thing up a bit.

“If it works out, it works out for everybody which would be great and we can get back to a bit of normality.”

There are areas that need work but Terry feels there is definitely something there to work with: “Obviously the last few games was a factor in my decision to stay on but we just need to build on that and as I said after the match, we need to work on our skills and our conditioning going forward to make sure that we are far fitter, stronger and more skillful.

“We have this window to work on it, how big that window is we don’t know. It is a matter of them stretching that out.”

Looking back in 2020 as a whole, the Leitrim manager felt that the Covid Lockdown back in March came at just the wrong time: “We’re a results driven game and we didn’t deliver the necessary results all year. I did feel at the stage we played Louth that we were getting into a good place, the fact that we had all our players available that we didn’t have for the earlier games.

“We were starting to build momentum and then Covid came and broke things down. Then we lost contact with the players and lost contact with what we were doing with them. We had a short enough window coming back, I felt that two or three weeks wasn’t going to be enough to prepare for the start of the League.

“Now, it was no different for anybody else, don’t get me wrong but we could have done with a little more time to get them prepared but it is what it is and it is history now.”

With Cork’s seismic win over Kerry commanding most of the headlines, back here in Connacht Terry was somewhat disappointed with the challenge Roscommon put up to Mayo: “To be honest with you, I felt Roscommon would hold Mayo, I felt that there was opportunities to get at the Mayo defence.

“I will say that Mayo did up the intensity an awful lot from our game, I think maybe they may have got a wake-up call from our game in one sense and to be fair to them, they reacted to it. Roscommon looked very, very flat, it is very hard to explain it, you’d have to be wondering about the Roscommon camp, possibly there was a little bit of a throw-back to their Covid incidence, maybe there was a little bit of a lack of energy, I don’t know.”

“The quality of Division 3, I did say that at the start of the year that I honestly felt that Division 3, when you looked at it, was stronger than Division 2.”