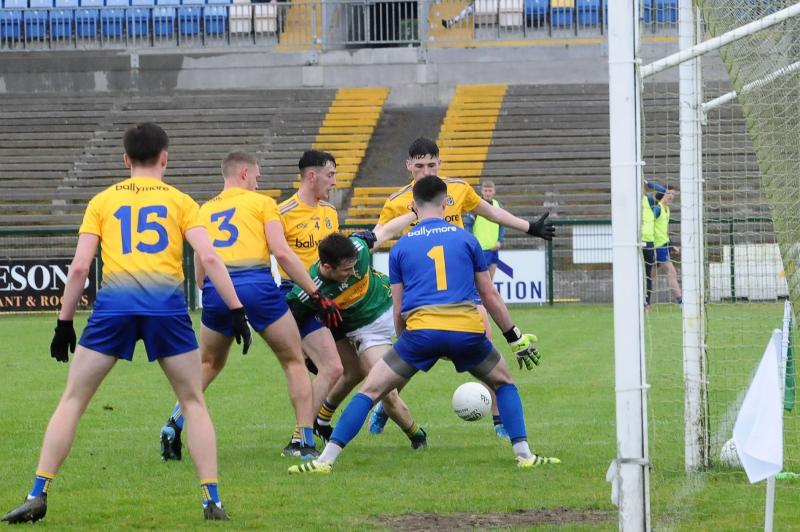 Tom Prior tries to squeeze a shot at the Roscommon goal late in the first half Picture: Willie Donnellan

Sometimes, it is impossible to find any words to describe what you’ve witnessed on a football field. Tuesday night’s Connacht U20 Championship clash is one such occasion as a promising Leitrim display was wiped off the face of the earth in ten awful and painful minutes by Roscommon in Dr Hyde Park.

Four goals, two either side of halftime, propelled Roscommon into next week’s semi-final against Sligo and reduced what had been, up until the game inched its way into added time at the end of the first half, a close and compelling contest between two evenly matched teams.

Roscommon’s edge in finishing gave them a three point edge as the game ticked towards injury time and everyone in Hyde Park was looking forward to more of the same in the second half, a competitive and hard fought clash that had spectators wondering which way the game would go.

But in an instant, the game changed - a misplaced plass from Gavin Reynolds in the middle of the park saw Roscommon sense an opportunity as they bore down on goal. Reynolds, desperate to make amends, unfortunately took down Roscommon’s Ben O’Carroll as he was about to set up a goal opportunity inside the 21 yard line. 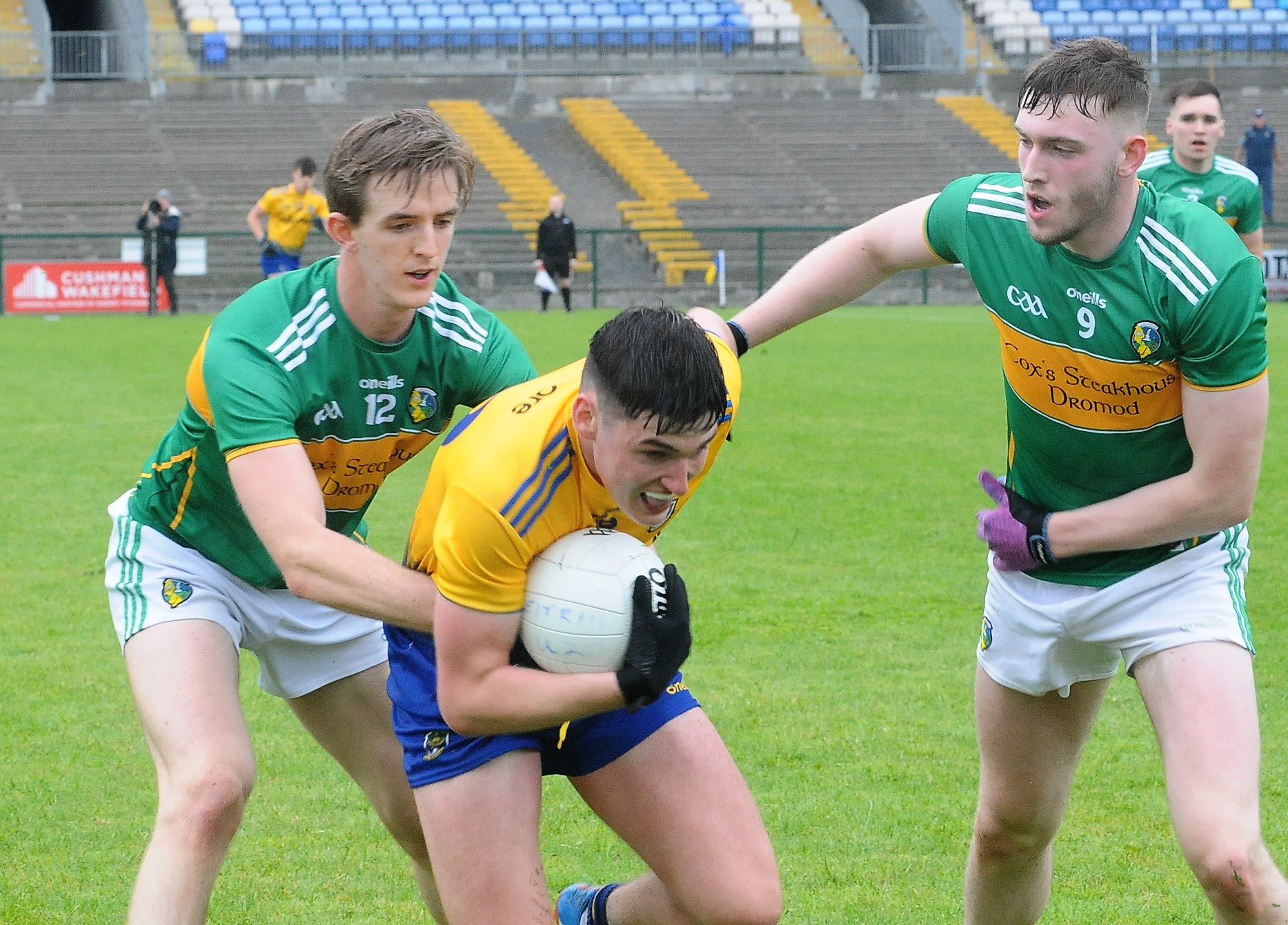 Reynolds picked himself up off the ground to see a black card and a pointed free from Adam McDermott. Fans and players knew instantly Roscommon’s extra man would make a difference for the next ten minutes but nobody, and I mean nobody, could have foreseen what happened next.

From the kickout, Roscommon intercepted and fed the ball quickly into McDermott who found the net in a brutal blow for Leitrim. Ben O’Carroll put a free wide but made amends a minute later in spectacular fashion, first feeding the ball to McDermott who saw his shot brilliantly saved by a flying Sean Reynolds.

Unfortunately for Reynolds, O’Carroll had never stopped running and reacted quickest to force the ball home from close range after the ball bounced off the Leitrim keeper.

With that, a three point deficit at the end of normal time was transformed into a yawning ten point gap and, given how close the game had been beforehand, it was impossible to escape the conclusion that the game was done.

But just to make sure, Roscommon killed off the game in two calamitous minutes after the restart. The smallest of the four midfielders, Ronan Garvin won the ball from the throw-in and fed it to his rampaging partner Keith Doyle who was bearing down on goal.

Luck seemed to smile on Leitrim as the ball squirmed from Doyle’s grasp but incredibly, Darragh Heneghan came in from the wing unmarked and fired home from close range. To make dire matters far worse, Sean Reynolds suffered an ankle injury in attempting to make the save and was replaced by Matthew Earley.

Earley’s first task was a kickout, the second to pick the ball out of the neet as Doyle won the kickout and sent the ball to a completely unmarked James Fitzpatrick 20 yards from goal and he blasted the ball to the net with any glimmer of hope the most green-eyed Leitrim fan had quickly extinguished. 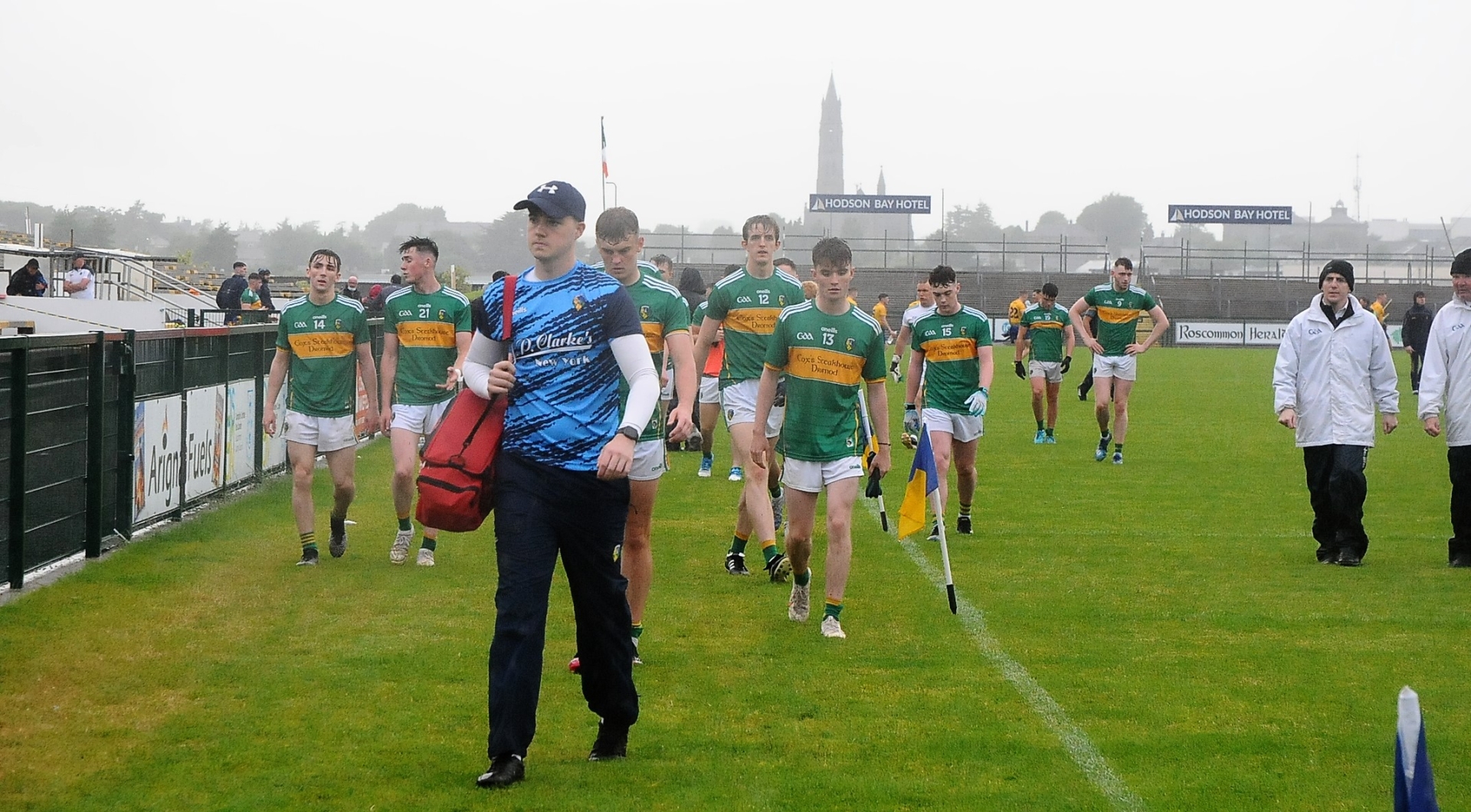 It had started so promising - Daire Cregg’s point was matched by Paul Keaney’s point after a good one-two with Colin Moran but Tom Prior saw a good shot blocked. Adam McDermott opened his account with a point on three minutes but Roscommon should have goaled when Cregg burst through and with men unmarked in front of goal, blasted his shot off the crossbar.

Leitrim replied in kind - missing a great goal chance as Tom Prior’s persistence and mazy run got him through the cover but he pulled his shot too much, the ball going wide on the near side with only the keeper to beat.

Keaney popped over a free but a couple of bad Leitrim wides were penalised by points from Cregg (free), McDermott, O’Carroll and Cregg as Roscommon led by five points after 21 minutes.

Leitrim rallied, a good Tom Prior run feeding Barry McWeeney and the Kiltubrid man managing to get his shot over the bar despite a half-block on the ball. Tom Prior quickly added a fourth Leitrim point before James Fitzpatrick reacted quickest to a Cregg free to fire the ball over the bar.

Tom Prior’s mazy runs caused consternation in the Roscommon defence but nobody was able to get a touch on his pass across the face of the goal but Gavin Reynolds did point from the resulting ball.

Adam McDermott pointed for the Rossies but Patrick McKenna raided up from defence to get on the end of a good Leitrim move to point, leaving just three points in it before the game imploded from Leitrim’s point of view.

The second half was an anti-climax from everybody’s point of view - Roscommon’s two quick goals killed the atmosphere quicker than the pouring rain as the home team added points from Cregg and O’Carroll. Oisin Bohan pulled back a point but Roscommon stretched their lead to 20 points with three from Cregg by the 20 minute.

A late Leitrim rally reduced the gap by two thanks to scores from Prior (2) and Bohan, The Ballinamore man’s second a lovely effort after chipping the ball up on the run in pouring rain. But Roscommon had the last word, with another disappointing note for Leitrim as Tom Gilheaney was black carded, and Cregg tapped over the free as they won by 18 points on a depressing night for Leitrim football.

The Leitrim team who were defeated by Roscommon in Dr Hyde Park Picture: Willie Donnellan