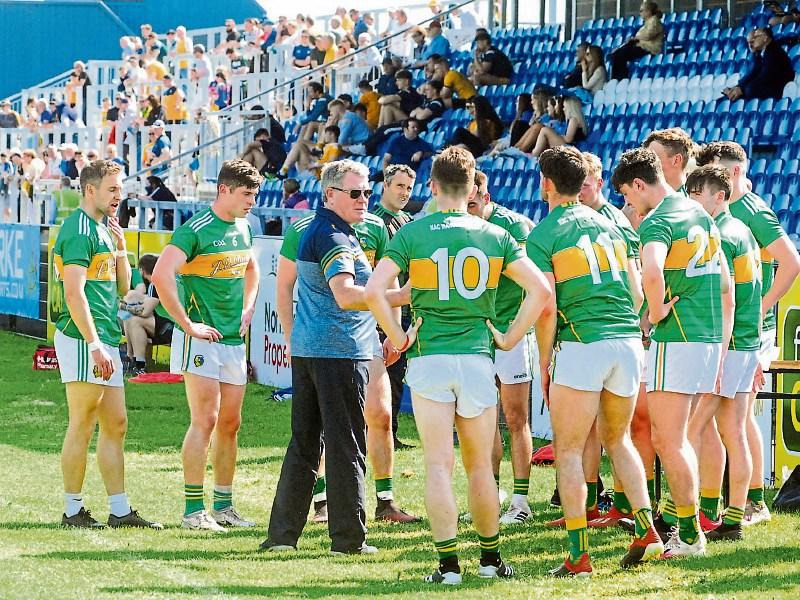 Terry Hyland addresses Leitrim's players during a water break in the last Allianz NFL Division 4 tie against Antrim in May Picture: Willie Donnellan

The bookies have Leitrim down as 500-1 outsiders for next Sunday's Connacht SFC Semi-Final clash with Mayo in Elvery's Mac Hale Park so it is no surprise to hear Terry Hyland state there would no grand futile gestures from his troops but a chance to see how much they have improved.

Leitrim lost to James Horan's side in the wet and cold of Avant Money Pairc Sean Mac Diarmada last November, losing 2-15 to 0-10, and realist that he is, the Leitrim manager is not foolish enough to come out and baldly state his team are going to dethrone the provincial champions in their own back yard.

Now, anybody who has spent any time with the former Cavan manager knows he is no defeatist and Terry promises Leitrim will give it their all next Sunday: “We’re going out to be disruptive, we’re going out to give Mayo as good a game as we can and measure where we are after that.”

And then he adds “Stranger things have happened and there have been turnovers” leaving one to imagine the possibility of what would rank as one of the all-time great championship shocks in the history of the GAA!

The Leitrim manager is all too well aware of the size of the task facing his team after Mayo obliterated Sligo 3-22 to 0-13 in Markievicz Park, a Sligo team that has seven points to spare over Leitrim in the first round of the League. So it looks a gargantuan task for the Green & Gold, right?

“They had a good League campaign, they had a good championship campaign last year, they were in the All-Ireland Final and they are looking for that elusive All-Ireland,” muses the Leitrim manager before setting out the challenge facing his players, “From our point of view, we have to step up and see where we are. Most people would say ‘see how long we can last’ in a contest with these guys.

“We competed quite well for 20-25 minutes last year and the black card incident turned the game in their favour so I suppose it is how can we stretch that out and prolong that form within the group.” 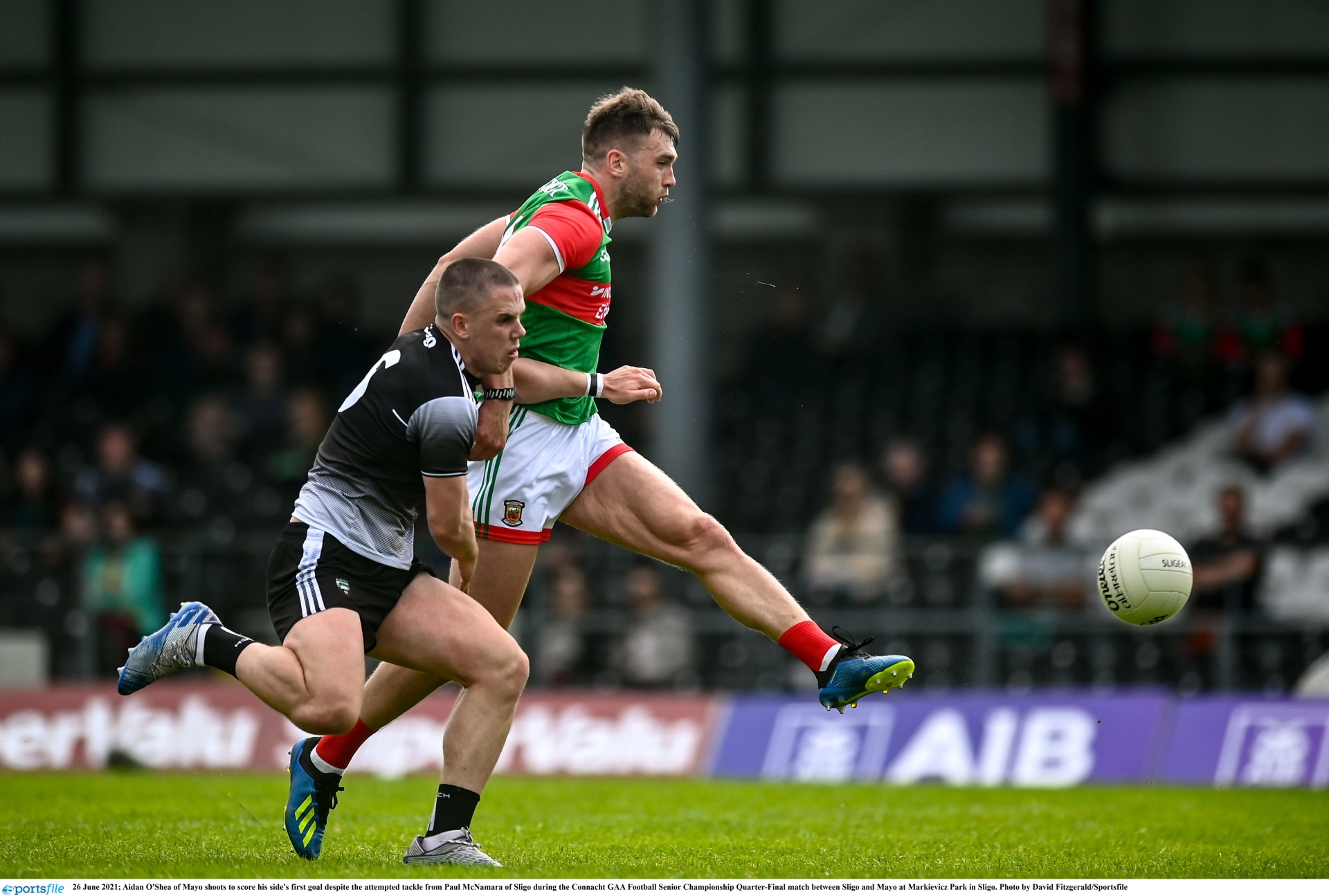 Leitrim won't have to face Cillian O'Connor who finished as top scorer last November in Carrick but Terry believes Mayo are well able to cope with the Ballintubber man's absence: “Where the weaker teams might pick up a few injuries, those stronger teams are better conditioned and they’re coming in well rested into the championship after a shot league campaign for them so they are probably big contenders for the championship.

“Don't get me wrong, Cillian is probably supplying 40 to 50% of their scores between the League and championship all year but a lot of that has been freetaking and somebody else steps up to take the frees. The biggest loss they will have from Cillian O’Connor is probably his leadership upfront.

“He sets the tone as regards tackling and all that sort of stuff for the rest of the forwards but I’m sure they’ll have that well tuned into their players at this stage.”

Most fans, indeed most Leitrim fans, are expecting nothing less than a cakewalk for Mayo on Sunday and motivating yourself to play in a game that nobody expects you to win is incredibly difficult but Terry wants his players to challenge themselves and win their battles to see how much they have improved over the last three years.

“Don’t get me wrong, Mayo at 500 to 1 on for the game, that’ll tell you what everybody else is thinking. But do you let that in on you as an athlete, as an individual or as a group? No, you can’t because if that was the case, 80% of the teams in Ireland would fold their tents after the national league was over, saying we’re not bothering with it and then you wouldn’t get to call it an All-Ireland with that scenario.”

Competing in the championship seems to be getting harder and harder for smaller counties and Terry agrees that it is a growing problem with no end in sight for the vast majority of counties as the more successful counties continue to build on their circle of success thanks to greater financial resources and population numbers.

“That’s where most of the counties are and it goes back to resources, and I don’t just mean monetary resources which is a major, major factor,” said Terry, “You have human resources and population base and all that kind of stuff and to be fair to the Mayos, the Dublins and the Kerrys, they have systems in place for bringing on all their players at different levels.

“Mayo will compete in the Junior All-Ireland for guys that may be just on the outside of adult panels with the hope that maybe one of them will step up for the senior team. They all keep the strands moving that will improve the whole county and that goes back to the monetary resources and to be fair to the players in these stronger counties, they are well looked after nowadays from a sponsorship point of view and even from a work point of view.”

Committing to a county with a chance of success is much easier than for the so-called minnows as long runs in the championship develops players far more than any training schedule could: “It makes it a lot easier for players who are involved in the system to say they’re going to commit.

“Unfortunately, for 80% of the counties, once the national league is over, they’re looking at if we get X, Y or Z, we can have a run in the championship. Extra games brings on teams and when you go back to the national league the next year, they have improved, you get promoted which means they are playing stronger teams and they get better because of that and then they get a couple of championship games so it keeps bringing them on and on.”

Terry believes that counties will have to adopt a long term plan, much longer than most are currently considering, if they want to compete for All-Ireland honours, even going so far to propose a pretty radical solution: “It is a long term project for 80% of those counties, how they set themselves up. If you decide today, we’re going to start training ten year olds and they will be the nucleus of your team in 15 years time, it is a very long time to look ahead of yourself and a lot of teams can’t see that, a lot of counties can see that far ahead of themselves but what they forget about it is that after that 15th year, in that 16th year, the conveyor belt churns out another batch of talent and then you are up and running.

Form wise, Terry says that Leitrim have picked up in recent weeks despite the inevitable soft-tissue injuries that are cropping up this year on inter-county teams with such a shortened time-scale for team to prepare.

“We’re probably no different to anybody else, we’ve picked up a few injuries, soft tissue injuries. Training has stepped up I would have to say. The last week, things have probably got better, we’ve settled back off a heavy batch of training and lads are in good form.

“We just have niggling little bits of injury but when you have a small panel, these things play into a squad, how many are in the squad. We have small numbers, there is no point in trying to hide the fact that that is the way we are but the lads are in great form.”

In fact, the Leitrim manager points to recent past to illustrate that teams can turn their form around very quickly: “ I remember being asked this question going back to a Derry game and we had played Mayo in the FBD League and we got well beaten and people were maybe panicking and worrying where we would be later in the League.

That mental aspect is important as Leitrim's young players seek to win their place on the team, even if their manager stresses that the group is all important rather than who makes it onto the starting 15 next Sunday in Castlebar.

“They’ve carried that into the training since and they are pushing on, there is competition there. It is down to us as management who starts and who comes on but the big message you have to get across to players, and there is an element of disappointment that they are not starting in a championship match but less so that it was years ago.

“Players understand now that it is a 20 man game, it is a matter of getting out and doing your best for the group and I think people are starting to understand that it is all about the group. The days of a guy scoring 1-5 and holding his hand up and saying I had a great game but the team lost the game by ten points, that day is gone. There is more group think in all teams at this stage.”

Indeed, Terry hopes that the entire team can feed off the enthusiasm and energy of young players who are fighting tooth and nail to get into the team: “You can feed off that because they want to prove themselves against somebody else who is deemed to be an awful lot better and see how they get on in that battle and that is the type of thing we would be appealing to.”