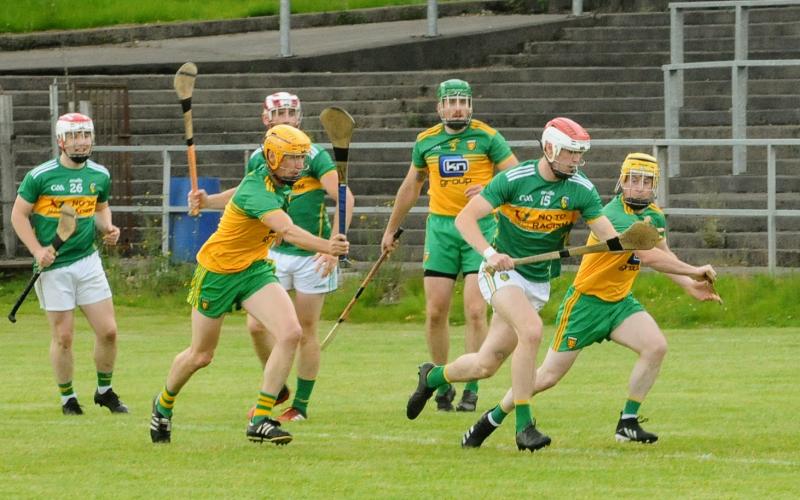 An eight point defeat is not normally a cause for celebration and, in truth, the Leitrim hurlers were not in any way pleased to lose but this was a much improved performance against last year’s champions as they gave Donegal a real scare in a tough and entertaining contest.

Leitrim led by five points at the break thanks to two strikes from Diarmuid Kelleher and one from James McNabola but once a rattled and discomoded Donegal found their range in the second half, their class and superior power shone through.

But the Ulster men know well this was no cakewalk as Leitrim harried and hassled them for much of this contest, driving them to distraction in the first half so much so they picked up a red card and three more yellows as they seemed more interested in arguing with the referee and calling for cards for every challenge they faced.

But they were a different side in the second half, making the most of the interval to regroup and once they levelled the scores and levelled the numbers on the field thanks to a fourth minute penalty after Martin Feeney fouled Ritchie Ryan for an incident that was deemed a goal scoring opportunity, Donegal never looked in any danger. 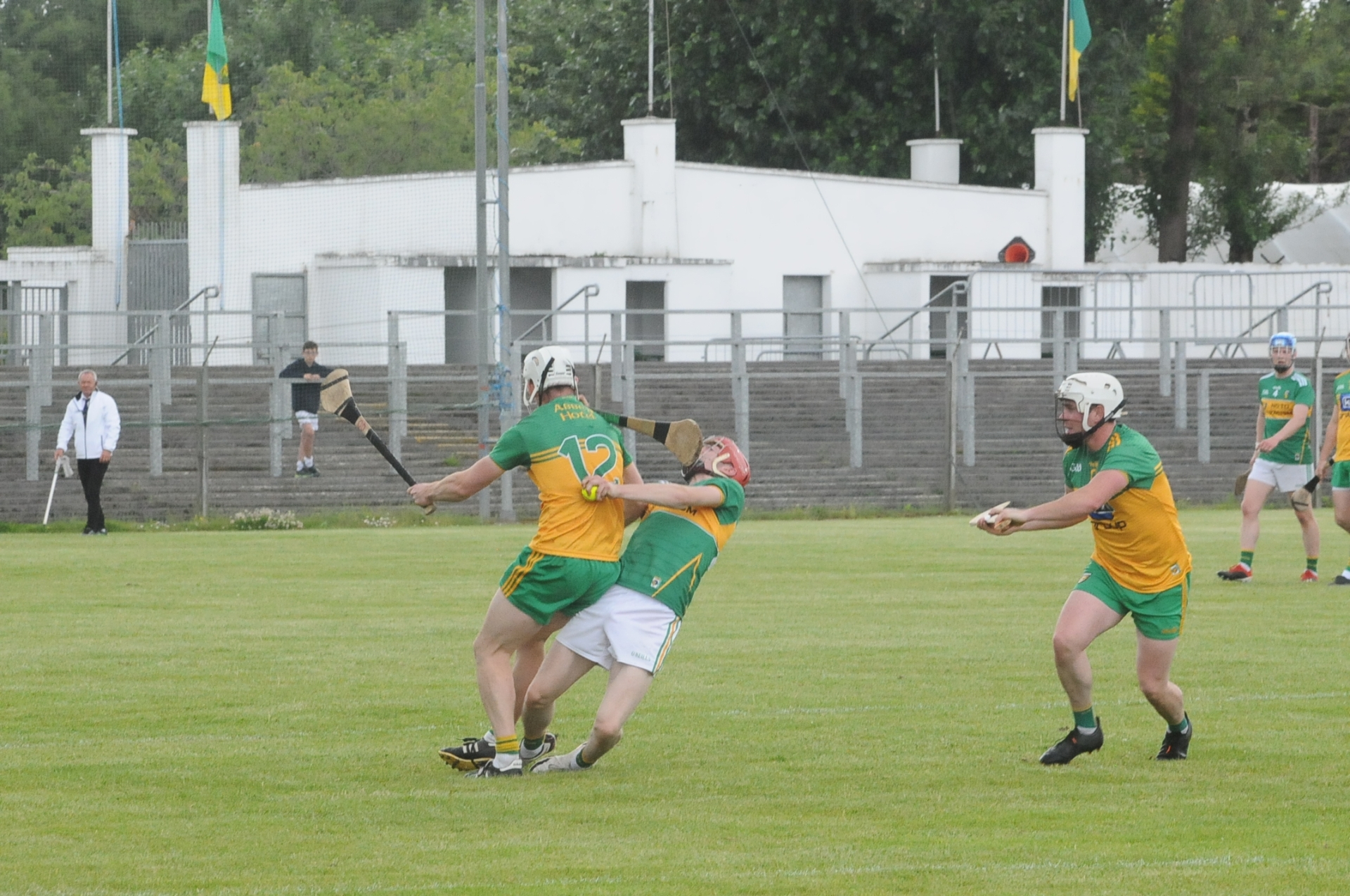 The confidence of the Ulster men blossomed as they started to find space and time against a tiring Leitrim side who never stopped battling and in fact grabbed a fourth goal near the end thanks to Ben Murray and were unlucky not to find more.

Leitrim now face a semi-final/relegation playoff next weekend against Armagh, the winners going into the semi-finals and the losers relegated back to the Lory Meagher Cup for next year. And while they were very disappointed with the result, there was enough progress in this game to suggest that an improving Leitrim will really test the Orchard County.

Sean McVeigh thought he had opened the scoring just eight seconds into the game but the score was ruled wide. Donegal’s early unease was not helped by a shot come off the post while Ciaran Matthewson shot wide across the goal.

Gavin O’Hagan opened the scoring for Leitrim from a 55 yard free on four minutes but sharpshooter Declan Coulter replied for Donegal a minute later. Cathal O’Donovan scored a wonderful point from 50 yards on six minutes before Coulter hit back from another placed ball.

Leitrim struck an early blow when, just seconds after a lovely Gavin O’Hagan effort from the left wing, a long delivery to the edge of the Donegal area was batted down, Diarmuid Kelleher reacting best as he gathered, rounded his man and blasted a powerful shot to the roof of the Donegal net.

Donegal replied with another Coulter free on ten minutes but they were clearly rattled as Ronan McDermott picked up a yellow, O’Hagan putting the free wide while Ben Murray was also off target a minute later.

At the other end, Ritchie Ryan looked as if he was on his way through for a goal but a brilliant block denied him the three-pointer, Coulter tapping over the resulting 65. The visitors drew to within a point when Bernard Lafferty pointed from space on 13 minutes. 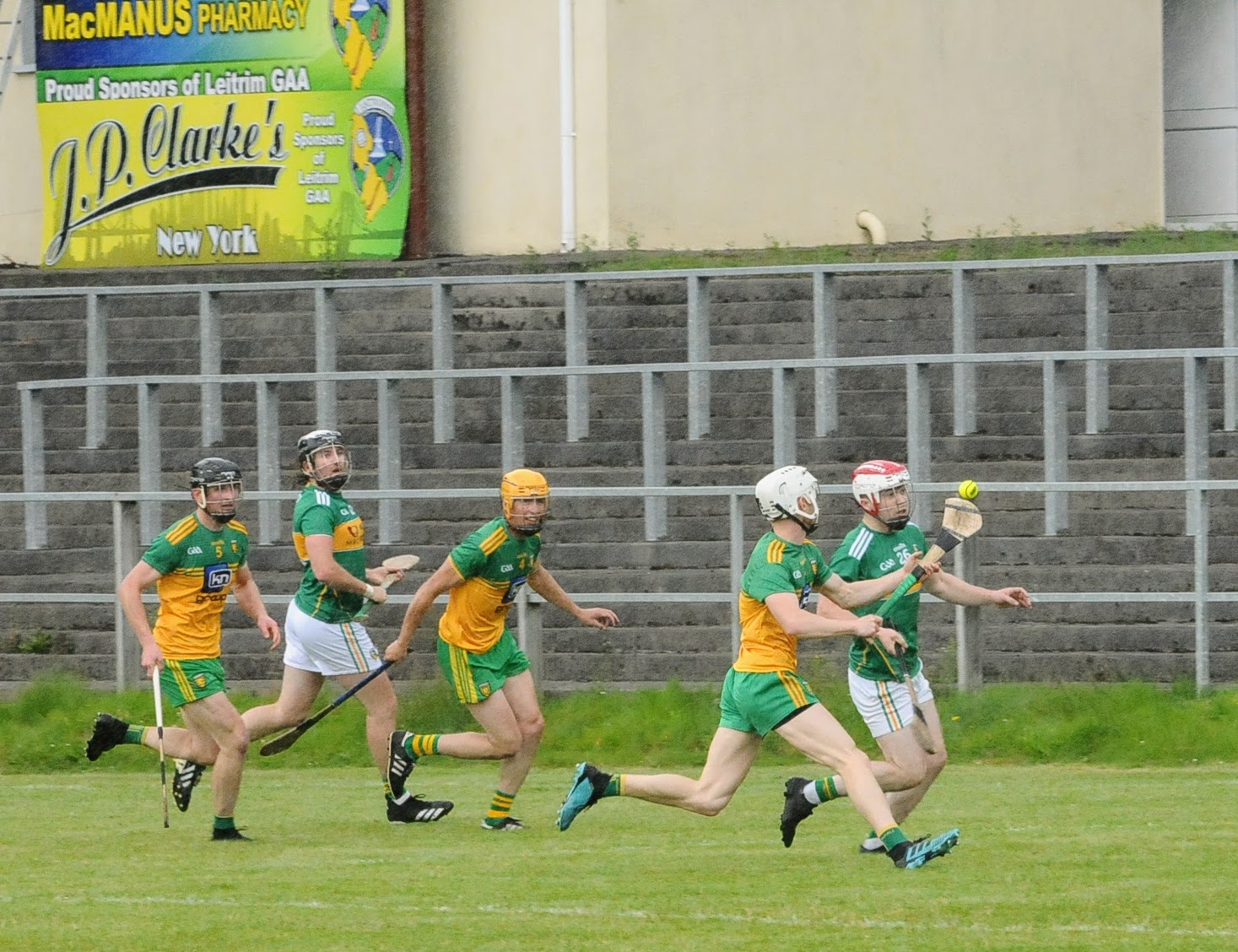 James McNabola gets ready to fire the ball to the Donegal net Picture: Willie Donnellan

But then Leitrim struck - captain David McGovern showed his power and he broke free and charged forward. His handpass found James McNabola in space with the ball bouncing off the young Eslin man before he drilled the sliothar to the net.

Ritchie Ryan pulled back a point before the water break but whatever message the Donegal players received during the break, it was all for naught when Ronan McDermott allowed his frustration to get the better of him, his hurl striking Martin Feeney’s helmet as Tipperary referee Michael Kennedy produced a straight red card.

Leitrim squandered a goal chance but Cian Mallon broke through the Donegal defence with open road ahead of him but the sliothar sliddered from his grasp while Donegal picked up two quick yellow cards for Gerry Gilmore for pulling across the legs of Cathal O’Donovan and Declan Coulter for an off-the-ball challenge.

O’Hagan saw a free caught on the line but blasted over the bar with ten minutes left in the half. Leitrim thought they had another point when the umpire signalled that Karl McDermott’s shot was successful but after consultations with the referee, the score was disallowed.

McDermott didn’t have long to wait home, O’Hagan showing great strength to emerge from a scrum for the sliothar to set up his Cluainin clubmate for a fine point from play.

Donegal responded with points from Coulter and Lafferty as Donegal were hitting some costly wides. Another Coulter free, awarded after Karl McDermott was penalised for holding, narrowed the gap back to two points with less than two minutes left.

Martin Feeney picked up a card for an off-the-ball clash with Coulter but Leitrim strick for a third goal in added time, Leitrim clearing a free before Liam Moreton won the ball and passed across the goal for Diarmuid Kelleher to bat home his second goal.

Lafferty pulled back another point but Leitrim keeper Lorcan Donnellan was alert to make sure that a long range free from his opposite number Luke White didn’t sneak in as it bounced in front of the goal, leaving Leitrim with a 3-5 to 0-10 halftime lead.

Halftime obviously had an impact for Donegal as they came out early and were much more focussed in the second half, firing over two quick points from Gerry Gilmore to cut the gap to two. Great work from Cathal O’Donovan set up Ben Murray for an excellent point after two minutes.

However, the game turned completely a minute later with disastrous consequences for Leitrim - Martin Feeney received a second yellow card for a foul on Ritchie Ryan that was deemed a goal scoring opportunity, although there appeared to be plenty of cover in place and Declan Coulter drilled to the net.

Now level on scores and players on the field, confidence blossomed in the Donegal ranks as Gilmore, Coulter (3) and Ciaran Matthewson fired over five points in as many minutes to leave the Ulster side five points clear having started the second half five points down!

Gavin O’Hagan halted the Donegal onslaught temporarily with a free while Gilmore and Liam Moreton swapped points but momentum was clearly with the visitors as sub Niall Cleary, Coulter and Ryan fired over to stretch the lead to six points.

Stephen Goldrick’s heavy hit on Coulter resulted in a yellow card and the Donegal man leaving the game through injury while the Leitrim man had to go off due to a blood injury. Ritchie Ryan taking over the freetaking duties as he tapped over. 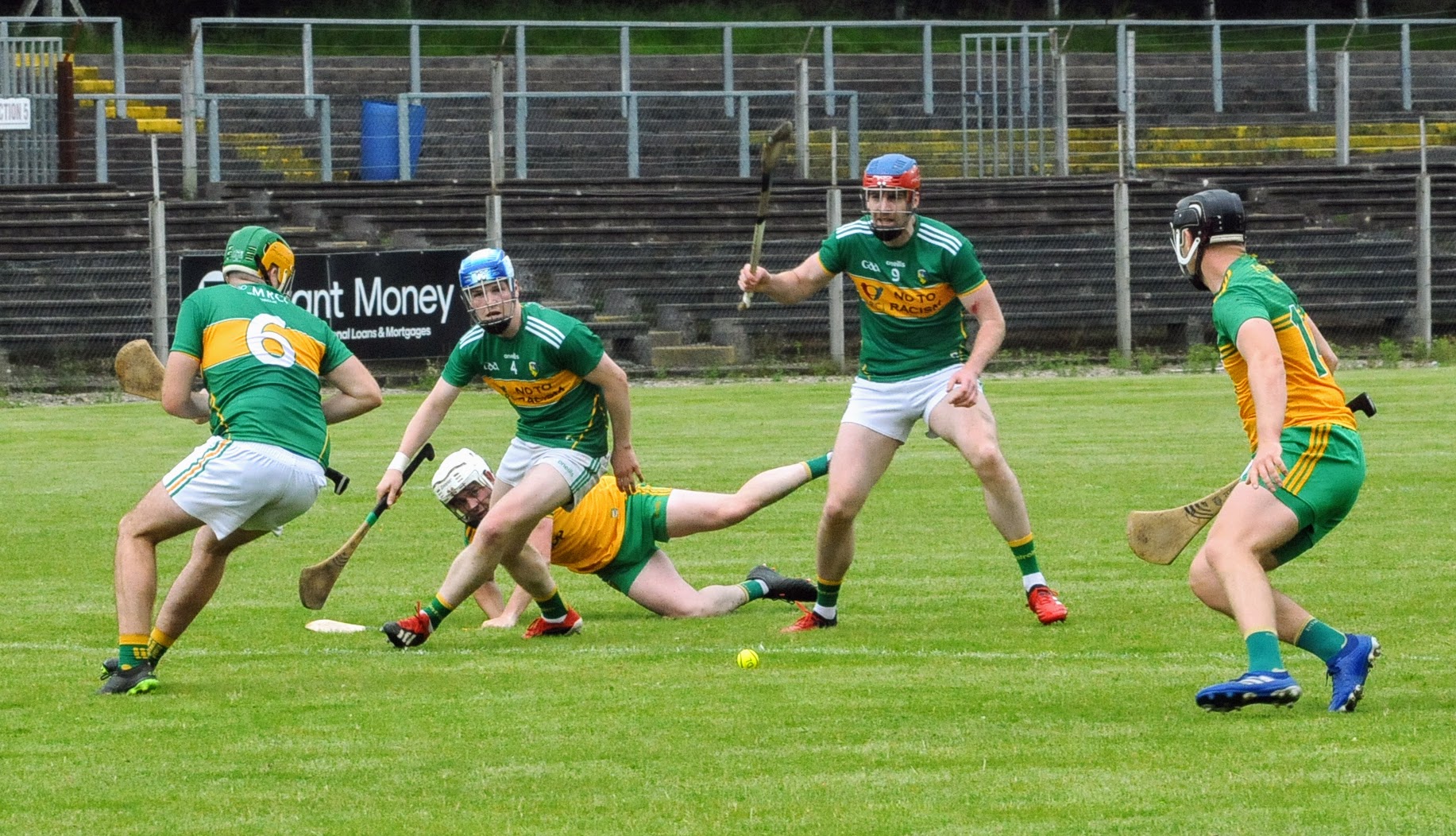 Donegal keeper Luke White was alert to stop David McGovern’s shot on 19 minutes before O’Hagan tapped over to cut the gap back to six points with 15 minutes of normal time left.

However, any hope Leitrim had of mounting an unlikely comeback were dashed as Donegal exploited the space left by tiring legs and Ryan tapped over two points, one from a free, and centre-back Jack O’Loughlin, switched into attack at the start of the second half, adding another.

Corner-back Christopher McDermott landed a point and Ryan added another free from 65 yards but any fears that Leitrim would collapse were ended when another barnstorming David McGovern run saw the Leitrim captain feed Ben Murray and showing a great touch, the wing-back batted the ball to the Donegal net with two minutes to go.

The game then petered out with Ryan and Karl McDermott swapping late points although Leitrim kept hunting for goals, Gavin O’Hagan seeing one powerful free batted out for a 65 while another flew wide just before the final whistle.