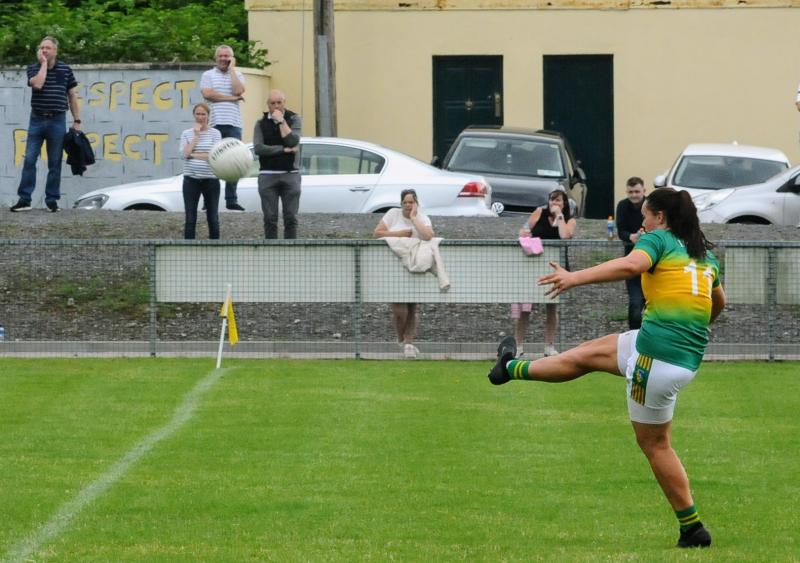 Michelle Guckian sends the ball towards the Fermanagh posts for the match winning score in Ballinamore Picture: Willie Donnellan

Leitrim trailed by six points at the break as Fermanagh threatened to upset the home team’s plans but a second half goal from Laura O’Dowd and another inspirational display from Michelle Guckian was enough to get Leitrim just across the line.

Leitrim now face Clare next weekend in their second game knowing that a victory would ensure them top spot in the group and a place in the All-Ireland Quarter-Finals.

Fermanagh opened the scoring with three quick points to put Leitrim on the back foot but they settled when Michelle Guckian hit Leitrim’s first point. Another Fermanagh point was matched by another from Guckian but the Ernesiders continued to add points to their tally.

Leah Fox pointed to cut the gap back to four points but Fermanagh stretched the lead to five points before Laura O’Dowd and Ailbhe Clancy responded with points to leave Leitrim three points in arrears.

But the visitors struck for a goal before halftime to give them a formidable six point lead at the break as Fermanagh led 1-8 to 0-5 at halftime. Fermanagh stretched their lead to seven points but Laura O’Dowd gave Hugh Donnelly’s side a real lifeline when she struck for a goal at her home pitch.

Leah Fox swapped points with Fermanagh but Leitrim were now cutting down the lead thanks to two points from Michelle Guckian before Ailbhe Clancy left just a point in it. Leitrim could have made it more comfortable for themselves but saw Clancy miss two penalties as the game went down to the wire.

Guckian levelled the scores with time almost up and with five minutes of added time, Leitrim were awarded a free much to the displeasure of Fermanagh and Guckian sent it over to secure a vital victory for Leitrim.