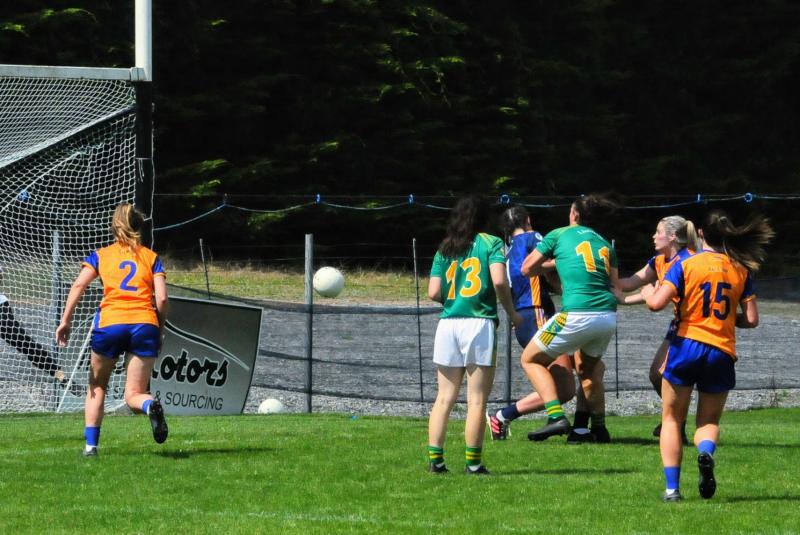 Clinical finishing and a superb second half display saw Leitrim defy the League standings as they saw off the challenge of Division 2 side Clare to book their place in the TG4 All-Ireland Intermediate Championship Quarter-Finals at a sun drenched Duggan Park in Ballinasloe on Sunday.

In a strangely low scoring encounter that seemed more in tune with a game played in the depths of winter rather than the sweltering conditions both teams endured, Clare seemed as if the were taking control of the game when Leitrim struck for three goals in a devastating three minute spell.

Two strikes from Michelle Guckian and another from Laura O’Dowd put Leitrim in the driver’s seat and although Clare fought their way back into the game thanks a converted penalty six minutes from time, the Munster women were never able to break down the massed Leitrim defence who repelled their efforts time and time again.

With an all Glencar/Manorhamilton full-forward line, Leitrim seemed to adopt their tactics by dropping most of their team into defence and playing long quick deliveries to the Manor girls. At first it did not succeed as Leitrim saw passes head over the sideline and endline with depressing regularity in the first half.

But then a moment of magic from Muireann Devaney, turning on a six-pence to drill a shot low to the Clare net before halftime transformed the game, wiping out Clare’s lead and giving the Leitrim girls a massive injection of confidence.

Clare again pushed out to a three point lead and in a cagey, defensive game, it looked like a match winning lead but that was until Leitrim’s devastating goal burst. 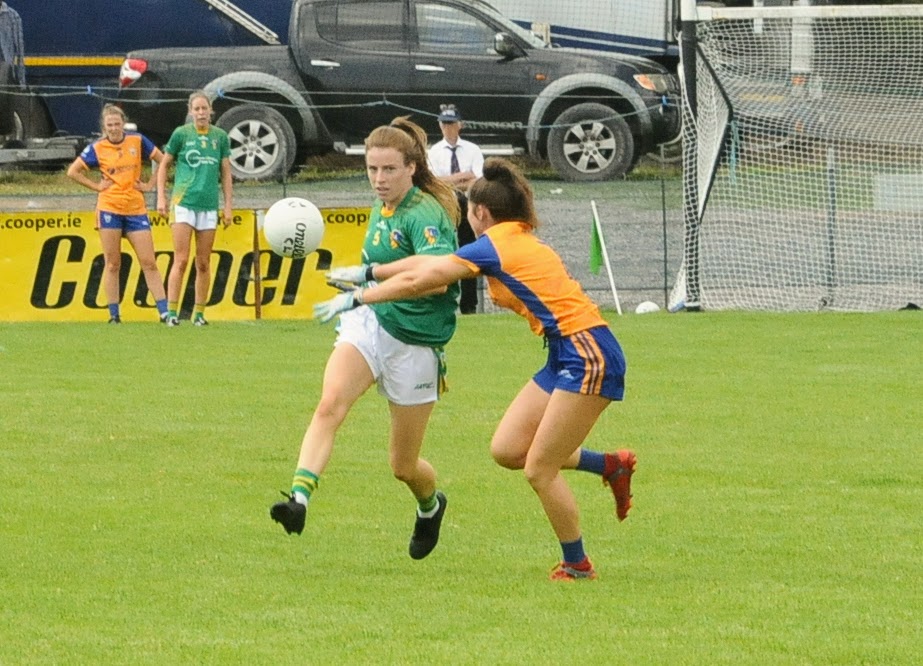 After a seeing a goal controversially called back for a Leitrim free, Muireann Devaney pounced a poor kickout to set up Michelle Guckian for a goal. Guckian quickly added another before Laura O’Dowd superb finish put Leitrim six up and cruising.

Unfortunately, the day ended on a sour note for Leitrim with a straight red card for Ailish Cornyn and Clare’s Niamh O’Dea for an off-the-ball clash. Now, I didn’t see the incident but the St Francis player was incensed and only the intervention of manager Hugh Donnelly prevented her from confronting the linesman who brought the incident to the referee’s attention.

Cornyn would be a big loss for the All-Ireland Quarter-Final but Leitrim will be waiting anxiously to see who emerges from Group 3 with Laois, Kildare and Roscommon all in contention for the two places in the quarter-finals.

The first half was a low scoring, tight affair where misses from both teams were the order of the day. It started off promisingly with Niamh O’Dea pointing after a minute for Clare following a good move but Leitrim could only worry as Michelle Guckian dropped a shot short and then missed two frees.

Clare’s Chloe Moloney saw a shot hit the woodwork after a vital block from Sinead Tighe but Michelle Guckian also saw a shot blocked. Niamh O’Dea converted a free on 12 minutes before Clare showed how deadly they could be when Ailbhe Clancy’s shot fell short and was gathered by the keeper.

Clare moved the ball the length of the field with Aisling Rediy finding the runner through the middle before Fidelma Marrinan blasted the ball past Michelle Monaghan for a goal on 14 minutes, Leitrim finally opening their account with an immediate response from Laura O’Dowd, although a goal appeared on after good work from Leah Fox and Ailbhe Clancy. 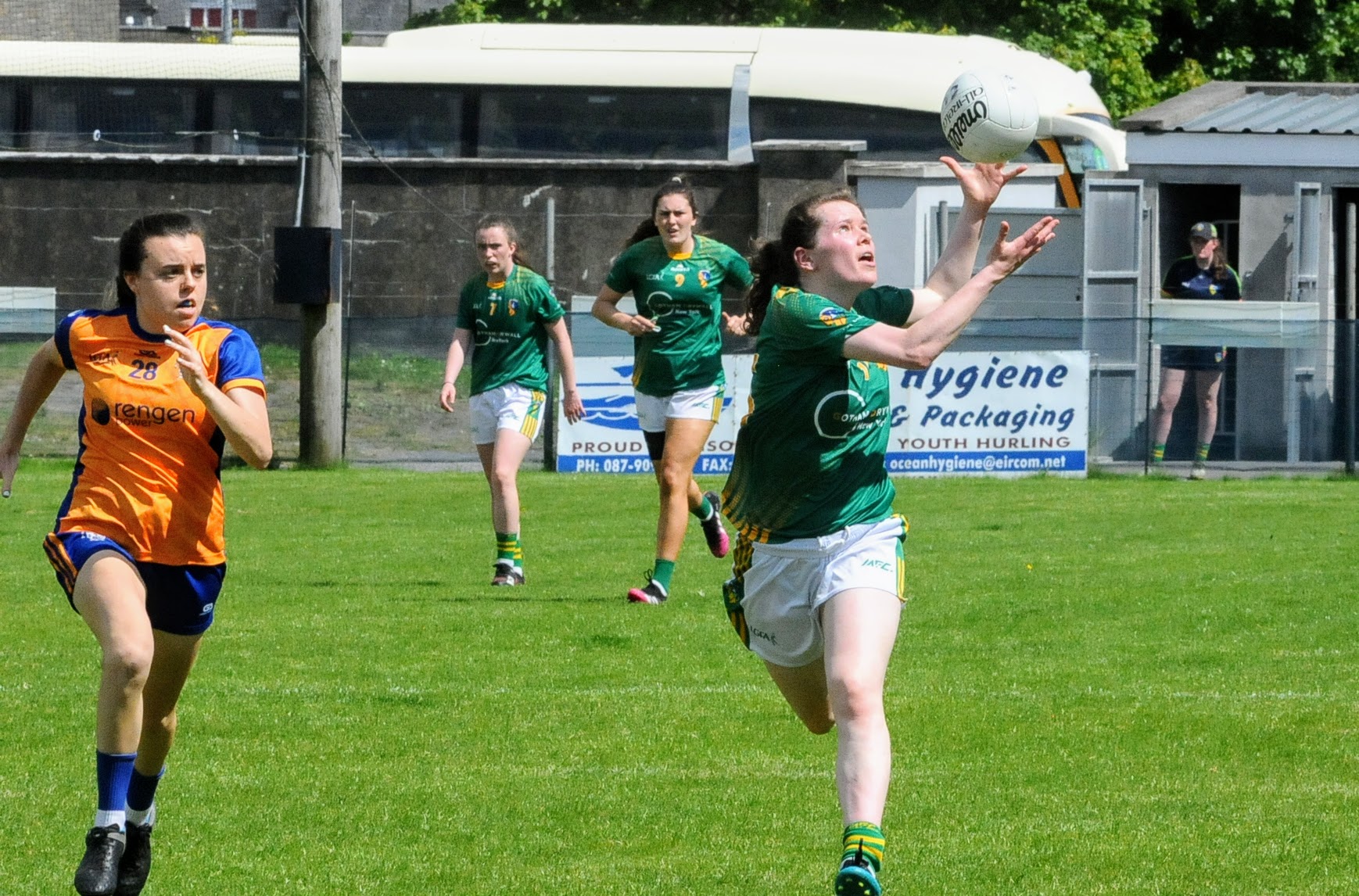 Clare’s O’Dea missed an easy free after a short free routine but made amends when she set up Marrinan for a good point. Muireann Devaney then robbed Clare centre-back Tara Kelly to point.

When Clare look back on this game, Michelle Monaghan’s superb save from Catriona Callinan when she was put clear through will be a big regret, the Leitrim keeper making a superb save to deny a certain goal.

Both sides missed good chances but Leitrim finished the half best with Michelle Guckian firing over before she then sent a high sideline ball into Muireann Devaney who turned sharply and sent a daisycutter low to the far corner to tie up the scores.

Moloney and Guckian would swap points before the halftime, the Leitrim player superbly fielding a high ball over the Clare defence to score, leaving the teams level at 1-4 apiece at the break.

O’Dea edged Clare back in front after the break but it looked as if Leitrim had missed a glorious opportunity when Muireann Devaney won the kickout and sent Leah Fox through on goal. Fox rounded the keeper and defence but blasted the ball high over the bar with a goal at her mercy.

O’Dea added two points and was unlucky to see a free hit the post and go wide but when Catriona Callinan pointed 11 minutes into the second half, Clare looked as if they were taking control as they moved three points clear in the sweltering conditions.

But then Leitrim sprang into life and it may have been an injustice that fueled their drive - Michelle Guckian won a long delivery, was clearly fouled and played the ball to an unmarked Laura O’Dowd charging through the middle and she blasted the ball to the net.

Unfortunately, referee Kevin Corcoran had clearly blown the whistle as Guckian was passing the ball and, to the ire of the Leitrim support, the ball was brought back for Guckian to tap the ball over the bar.

From the next kickout, Leitrim won the ball and a quick pass found Guckian unmarked as she blasted the ball to the net to give the Green & Gold the lead after 15 minutes. Two minutes later another high ball caused consternation with Fox and Clancy combining to set up Guckian for a close range finish.

Clare hit back with a fine O’Dea score but Letirim were in dreamworld as a long ball to Leah Fox saw the Clare defence exposed once more, the Manor woman finding a charging Laura O’Dowd who made no mistake from close range with just over 12 minutes left.

But any doubt that this game would go to the wire were quickly ended when a high ball found O’Dea who was fouled by Ailish Cornyn for a penalty, Moloney expertly sending Michelle Monaghan the wrong way to give her team a lifeline. 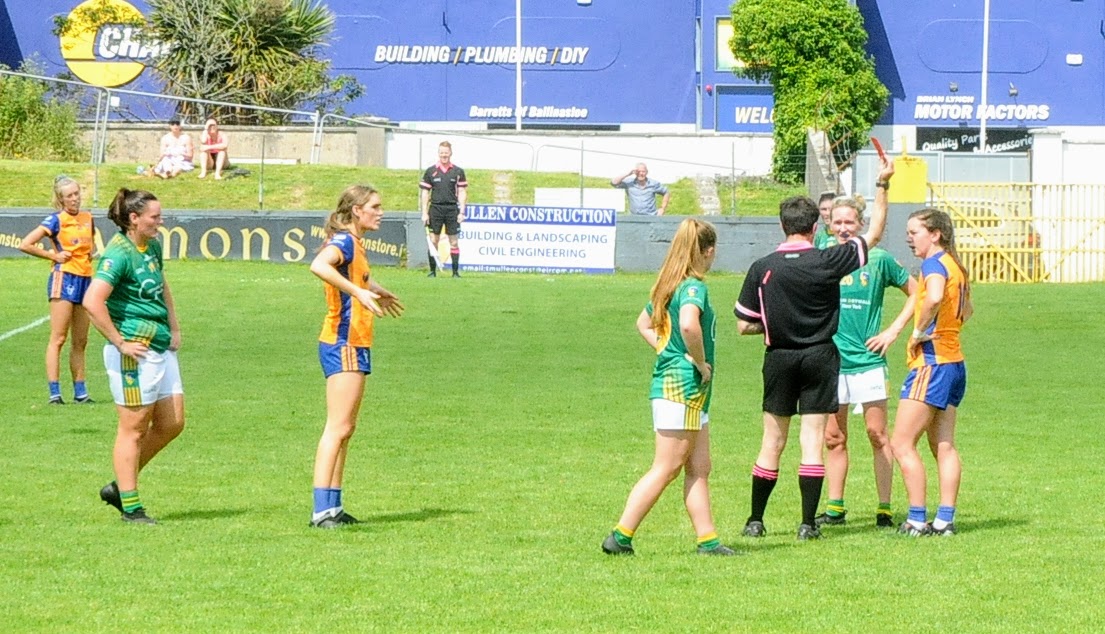 Ailish Cornyn and Niamh O'Dea get their marching orders from the referee Picture: Willie Donnellan

Incredibly, there was to be only one more score in the game, a Guckian free with just over two minutes of normal time left as Leitrim flooded their defence and frustrated the Clare attack, never giving them room to get the scores they needed while Laura O’Dowd was denied a late score by a smothering tackle.

There was one scare as a Clare sub was going through, seemed to be fouled but a free out was awarded. However, with the linesman and fourth official drawing the referee’s attention to a clash between Ailish Cornyn and O’Dea, the referee then issued two straight red cards to both players.

Cornyn was incensed and manager Hugh Donnelly moved swiftly to prevent the St Francis player from confronting the linesman, the only sour note to the day.