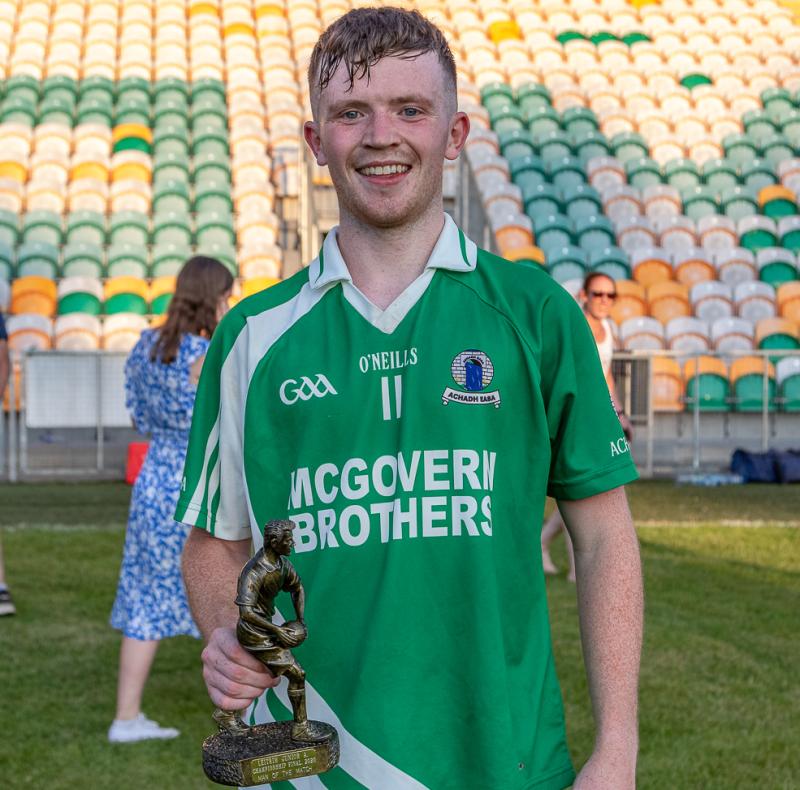 Exhausted and delighted in equal measure, Man of the Match Seamus Sweeney described Aughavas’ victory in Saturday’s 2020 Vistamed Junior A Championship Final as “massive” for the club.

Asked to describe what the victory meant for Aughavas, Seamus said “It is massive, massive. We don’t get to finals much, it is a young team coming and we knew we needed to be up in Intermediate. We’re there now and hopefully we’re going to give it a right go.

“When I first started off as Junior, it is a whole different pedigree up there so I just want our younger lads, 18, 19, they just got an extra year there, they’re a bit more comfortable and there is a lot of players coming through, a lot of people are training so this club is definitely on the rise and that’s a positive.”

The Man of the match admitted he was a little worried in the early stages after Cloone’s blistering start but once Aughavas settled down, he felt they were well on their way: “The start of the game? It was tough.I was a bit worried at the start but once we got into the game, I got a few frees, other players started scoring and it was a bit easier but the whole game was tough so I’m just thrilled to get over the line.”

Playing in the sweltering conditions on Saturday added to the difficulty of the task but Aughavas did everything to counter the heat, warming up in the shade and even moving their water-breaks to the shade of the trees to alleviate the heat any way they could.

“It was really sticky, even your throat would be so dry,” said Seamus as he described what it was like to play in such heat, “but once you got the first 15 minutes, I think you got used to the heat. We were getting ice on and, yeah, I’m absolutely drained now, absolutely drained but look, just getting over the line was the main thing and we all left it out there on the field today.”

It may have been a short response but even in his 23 years, Seamus has packed a lot in: “I’ve been playing since I was 16 so I suppose I do have a bit of experience, I’ve captained it one year so I just love this club and am delighted to get the win today.”

Whatever about the heat, Aughavas and Cloone coped with a long delay before Saturday’s Final due to the Covid-19 pandemic and it was the memory of that struggle that Seamus used to inspire his teammates on Saturday: “When it stopped last year we were kind of disappointed not to get it that week after.

“Since February, we’ve all been doing our 5ks and that so today, we put in so much work and I was just saying to the boys in the huddle, we just can’t leave it behind today because we trained so hard during this pandemic and it has been a tough time for everyone and we just wanted to win for our community.”