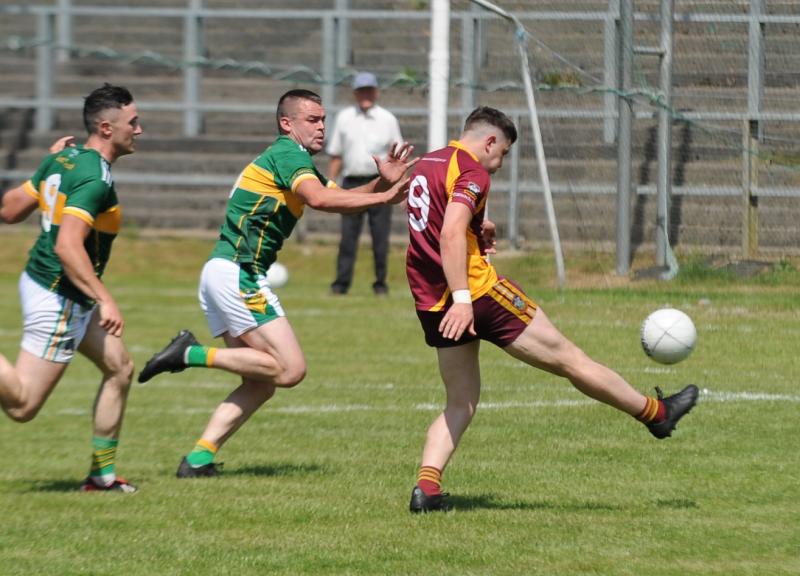 In the years to come, last Sunday’s Smith Monumental Intermediate Final defeat may be seen as a watershed moment for the footballers of Annaduff as the club has ambitious plans to develop and compete at the highest level in the years to come.

Their 4-12 to 1-10 defeat at the hands of Gortletteragh was difficult to take but for a team that has been rebuilt over the last 18 months, Annaduff look to have gained traction and their manager Joe Cox is just the sort of evangelical figure that wants to lay the foundations for the years to come.

“Playing in these games only brings them on,” Joe told the Observer after Sunday’s loss, “I know it is tough today and I know it will be tough again but we have knocks as we go along but the big thing for the club and for Annaduff is that we build players, we build our club and build our culture that we need to start working harder.

Incredibly, for a man less than a year in the job, Joe openly envisages handing over the reins at Annaduff in the future but will only consider if he has done a good job if he has left his club in a better place than what he found it!

“That’s the idea we’re on at the moment - today would have brought us on a good bit, no point in saying otherwise. If we had won that game today, you’d have been looking at a big boost confidence wise. We have to go back to the drawing board and start again and that’ll be a tough one.

“We’re working on something for the future rather than the present if you know what I mean. I was asked if it was tough to get ready for today’s game, it was a great game to play today - we’re getting ready for another championship in a couple of weeks time and you have to look at that side of it.

“We had four or five lads who played their first championship games for Annaduff there today so while it is tough today, the future is what we are looking towards, trying to build a group of players together over the next couple of years that we’d be able to compete at whatever level we are at.

“Young Daniel Bosquette there, he couldn’t play because he was underage. He would have been starting today if he was eligible, a great gasun and a lovely footballer but there are young lads coming through in Annaduff and the next two or three years, we just have to keep blooding them and bringing them through.”

Joe’s zeal for Annaduff is legendary but it is another Cox that the manager holds up as an example to all - Ray Cox who scored another 1-1 last Sunday against Gortletteragh and it is fair to say that Joe is a fan!

“Ray is exceptional - you talk about players around the place. I played all my football with Ray, everything I learned on the field, I learned it from Ray - just his enthusiasm, his workrate and his honesty, that’s the culture that we need in Annaduff and to have them around.

“I’d say there are not many senior teams in Leitrim that would have a player good enough to mark him and I’ve watched enough of them. We played Carrick out here, they were playing sweepers back to try and stop him and that’s the calibre of footballer he is.”

It is those qualities that Joe hopes will inspire his younger teammates: “When you get honesty, hard work and endeavour from somebody, it doesn’t switch off, it stays going and he is the fire that keeps burning in Annaduff all the time. When everything is going downhill, he is the one we all look to all the time, me, every one of us, the whole club because he epitomises what it means to play for Annaduff.

“To have him around and you’re talking about the likes of Mark Beirne, Sean McNabola, Cathal Cox and Nigel and Chris Farrell, they’re brilliant around the place. It is with their enthusiasm, their hearts and guts, we need them to teach these lads what it is to play for Annaduff.

“It is a little bit slower than I would have hoped but it will come - you can see it in training. We’re starting to talk a little bit more - today was a step too far, Gortletteragh was the best team and that’s it.”

The absence of Conor Reynolds was sorely felt, compounded by the loss of Eoin Gill with injury before halftime: “We knew about Conor, we had to adapt to that a few weeks ago so there was no problem. I think we adapted to it. Eoin was a huge loss, Eoin is the engine room of what we do and in all of the games so far we have played, when he is gone off the field or is injured, we just seem to drop a little bit.

Put to him that Annaduff kept fighting right to the end, his answer gives you the impression that it is nothing more than everyone expects - “That’s in our club anyway” - but he is in no mood to soften the harsh truth Gortletteragh showed them: “We weren’t good enough, we conceded two soft goals, I’d give them one of them, Jack Heslin’s second or third goal was exceptional and we were a bit open there around the middle of the field at stages.

“We thought that we’d be able to keep pushing and driving forward but we got caught with a couple of sucker punches. Our lads, they worked, they did their best, they were very honest with their approach, even before today. We have no complaints today, they were the best team by a bit towards the end of it and that is what happens in football.”