Performance, not final, on Minor minds says Leitrim manager ahead of Sligo clash

Connacht MFC semi-final: Leitrim take on Sligo on Friday in Markievicz Park and manager Adrian Dockery wants his side to concentrate on performance first 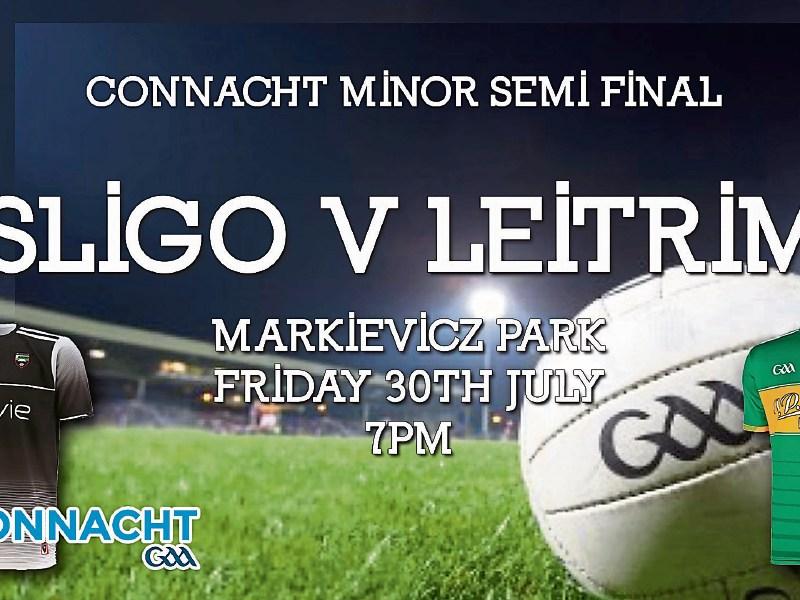 Leitrim Minors are just 60 and a bit minutes away from the 2021 Connacht Minor Championship Final but manager Adrian Dockery wants his players to put those thoughts to the back of their minds and concentrate solely on performing against Sligo next Friday.

Leitrim take on Sligo in Markievicz Park on Friday evening (7pm throw-in) with the prize of a rare Connacht Final appearance for the Minors (U17) at stake but their manager wants them to concentrate fully on the task in hand.

“We’re looking to go out there and give the best account of ourselves as we can,” Adrian told the Observer, “We want them to really really focus on themselves and our own performances. I think when you are really focusing on outcomes, you don’t have a huge amount of control over that.

“Something you can control is your effort levels, your appetite to get on the ball and your appetite in defence, to help out - that kind of stuff is more of what we’ll be focussing on.”

Adrian’s philosophy is remarkable simple - win more of your individual battles than the opposition and you have a chance! “Sometimes you get that kind of paralysis by analysis when you want to know about your opposition but ultimately, all these battles are generally one v one battles.

“There are 14 outfield battles and if you win eight of them, you’re in with a great shout and that’s the way we’re approaching it.”

Yet it must be hard to avoid thinking about reaching a Connacht Final? “It is tempting, there is no doubt about that. That’s part of the challenge for the lads and everybody involved not to take your eye off what is in front of you and not worry about a Connacht Final. We’re very much focussed on Friday night.”

The challenges of preparing an inter-county team during Covid restrictions are difficult and many but even more so with an underage team. But it is a challenge Leitrim have had to adapt to, says the former Roscommon player and Ballinamore Sean O’Heslins mentor.

“It has been different, it definitely has,” says Adrian, “We’ve had to adapt - everyone started off with their Zooms, team calls. We got back on the pitch in May and lucky enough we got a couple of club games off as well so the lads got games. Between Covid and all that happened, the competition has been put back a couple of times so we’re looking forward to it.

“It is unusual to have it in July, the Minor is normally a good bit earlier than this but we’re looking forward to it. They are a good bunch of lads and we’ve really enjoyed our time working with them and hopefully, things go well and we’ll get another week to work with the lads.”

Finding form is the challenge but Adrian believes at underage level, knowing the opposition is less important than knowing yourself: “We know a little bit about Sligo but I’m sure they know stuff about us as well. The lads would have played against each other through the academies as well, it is a similar bunch of guys they are coming up against.

“Both teams will have a little bit of homework done on each other but, truth be told, at these age grades, it is little bit more about what you do yourself rather than focussing too much on preparing for the opposition or getting too tactical in that regard.”

Some excellent results from the County U14 & 15 academy teams in recent weeks will help this crop of Leitrim youngsters: “I think so and you can go back to what we were saying about the underage age grades, there is a lot less concern about other counties and who you are playing, you just go out and you play.

“You really are playing lights out, focussing on yourself and doing the best you can possible do and that serves the underage teams well.”

Leitrim will carry a few injuries into the game but nothing more than usual: “We’ve a few bits, the nature of it, a contact sport, what have you so a few lads have picked up a couple of knocks in club games and at training. We’re down two or three guys but overall we’ve probably had a longer lead-in than most provinces so that has certainly helped us.

“We haven’t had as much of the soft tissue stuff that some of the teams who have had less lead in time and who have had to really push guys. We’re working from a full deck.”

Galway host Roscommon on Saturday in the other semi-final after the Rossies shocked Mayo with a 4-13 to 2-12 win last week with the final scheduled for either Friday August 6, or Saturday August 7.

With no games to get a feel of how this game could go, making predictions are difficult but Leitrim will be looking to end a poor record at provincial level over the last 20 years, with just two wins and one draw over since 2002 in the championship, although Leitrim did win the Minor League in 2014.

Leitrim last reached a Connacht Final in 2002 when they beat Sligo in the semi final before going on to lose to a Michael Meehan inspired Galway while the last win came in 2018 against Sligo in the round robin format. Sligo will start as favourites but a strong Leitrim performance would be a huge shot in the arm for the entire county.