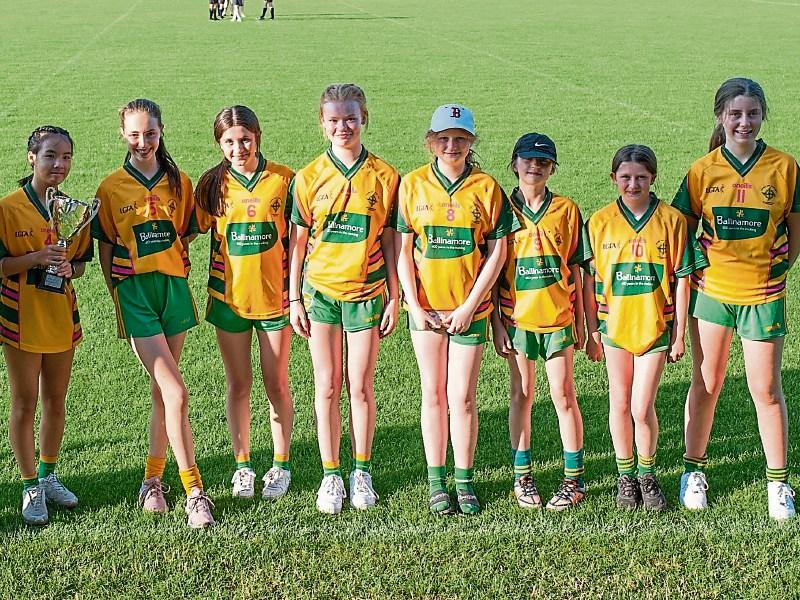 The Ballinamore Sean O'Heslins team who defeated Drumkeerin last weekend to win the Ladies U14 9-a-side Final who were presented to the crowd at the Masonite Division 1 Final Pic: Declan Gaffney

You know it is championship time when there are bonfires, parades and speeches and last weekend's long overdue finish to the 2020 left this writer eagerly awaiting the start of the Leitrim Club championships in a matter of weeks.

Maybe its because last weekend's club action was a wonderful escape from the grim results suffered by County teams over the past few weeks, although I'm sure more than a few people were feeling a little better after seeing what Kerry and Mayo did to Cork and Galway while our U20 footballers may be torn in how they feel as they watched Roscommon dismantle Mayo to win the Connacht U20 title last week.

Maybe it was because we saw two competitive and hard fought contests, no matter what the scoreline in the Intermediate decider might suggest. You can't beat two evenly matched teams going head to head, whatever the standard of competition, to produce drama, entertainment and heartbreak in equal measure - something to consider for our inter-county structures I think?

Then we had Mohill reiterating their standing as the team to beat in this year's championship with a barnstorming victory over Ballinamore in the Masonite Division 1 Final, a result that probably sent a few shudders around the chasing pack as Mohill beat a fiercely committed Sean O'Heslins to lift the League title.

The travails of our inter-county teams are for another day as club action roars back into action and with the championship soon upon us, the possibilities are endless as clubs dreams of glory or just retaining their championship status.

Certainly the four teams who contested the delayed 2020 Finals last weekend have a leg up on their competitors as nothing beats hard competitive action to bring a team on. Gortletteragh and Aughavas move up a grade but will do so with a great deal of confidence after their performances while Annaduff and Cloone will take a lot from their experiences last weekend for there is nothing like a defeat to strip away the notions we all have and lay bare the essentials of what needs to be done.

Right now, every club is hunkering down for a marathon of four games over five weeks but with the generous qualification of four teams from each group going into the quarter finals, an astute coach could be clever enough to target one or two wins that would be enough to see them through.

Those permutations are for another day but right now, excitement is building, challenge games are being played as everyone eagerly awaits the start of the club championship.

As I'm sure you are all aware, I'd be a stickler for obeying the rules on social distancing and GAA guidelines but sometimes, they seem so bizarre. Just last weekend, we had the strange situation where the Intermediate & Junior Cups had to remain in the care of the County Board rather than be handed out to the winning clubs, something I actually agree with after the antics following last year's Club Championship season that saw huge outbreaks of Covid related to Final celebrations.

Yet a microphone could be handed from official to team captain for the after-match speeches with no apparent contradiction at all! It is a strange ruling made more for optics rather than any science, I feel, but it is just one of the contradictions that the Covid pandemic has thrown up.

Incidentally, with Covid positive numbers rising around the county, particularly among juvenile teams, we could have a situation where some teams miss out on the championship due to a Covid outbreak in a club so we certainly all need to remain vigilant and practice social distancing as best we can over the next few months.

I'm sure many of you are dipping in and out of the Olympic Games from Tokyo, immersing yourself in sports that you rarely see and following those who wear the Green at every chance you get.

We've done a few articles about Leitrim's proud Olympic traditions but there is another link to this year's Irish team in the person of Galway's Cillin Greene. Not only is the GCH athlete coached by Gerard O'Donnell at Dublin Sprint Club but he has strong links to Glenfarne!

Cillin's grandmother Rosie Greene, nee McManus, was born and reared in Loughross, Glenfarne, Leitrim. Rosie is deceased but her brother Tommie Mc Manus is alive and well at 85 years of age and is proudly following the exploits of his grandnephew in Tokyo.

So another one to keep an eye on when Cillin competes with the Irish Mixed 4 x 400m team in Friday's heats. Thanks to Veronica McManus for sharing the information.

As much as it kills us, you've got to admire what Roscommon have achieved in the past week, beating Mayo in both the Connacht U20 and Minor championships. Their U20 win a little bittersweet for their Leitrim counterparts who must wonder what might have been but for a disastrous 10 minute spell in their first round clash.

Talking of “what if” is ultimately soul-destroying and pointless but that particular crop of Leitrim footballers might just take a little solace from Roscommon's victory. That ten minute spell destroyed their hopes but prior to that, they had gone toe to toe with the new champions and didn't look out of place. So there is always a glimmer of hope for that particular bunch of Leitrim players - who knows it may drive them to greater heights in the years to come.

Anyway, congratulations to Roscommon on their fine achievements.