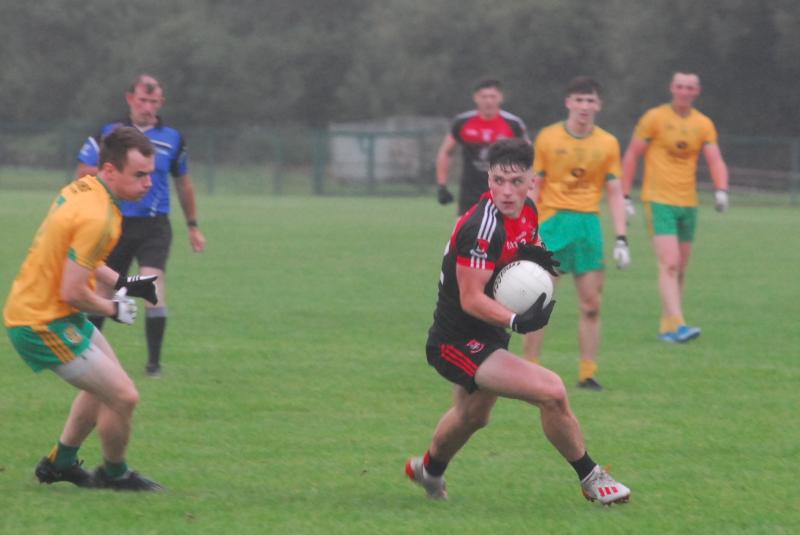 Fenagh St Caillin’s put their league form well and truly behind them as they deservedly saw off a misfiring Ballinamore Sean O’Heslins to land a statement win in the opening round of the 2021 Connacht Gold Senior Championship in Pairc Sean O’Laodain on Saturday night.

Oisin McLoughlin’s fifth minute goal was ultimately the difference on the scoreboard between the teams but where Fenagh won this game was in the second half as they withstood fierce but inaccurate pressure from their neighbours to grab a vital championship win and lay down a statement for the year ahead.

Semi-Finalists last year, Fenagh struggled in this year’s League as they were without ten first team players due to county commitments while Ballinamore pushed champions Mohill all the way in the Division 1 Final but that form was not reflected here.

Ballinamore can rightly point to some costly wide, particularly at the start of the second half when they missed the target on seven occasions in the first ten minutes, but as the game went on, Fenagh grew in confidence, stretching their lead to five points at one stage.

With Fenagh growing into the game, they calmed down and cut out the mistakes that littered their first half performance and they were good, good value for this victory.

Eoin McLoughlin opened the scoring for Fenagh three minutes in with Luke Murphy replying with a free a minute later. However, the decisive score came on Fenagh’s next attack when a long ball broke off Leitrim star Ryan O’Rourke and Oisin McLoughlin sidestepped before drilling the ball to the Ballinamore net.

Luke Murphy replied with a free, soft enough if I’m being honest for a foul on Wayne McKeon, but Dan McLoughlin set up Riordan O’Rourke who curled the ball over the bar. Another McKeon free for a Aaron McLoughlin foul, for which he was booked, kept two between the teams after 11 minutes.

The tit for tat continued over the next eight minutes with Paddy Connaughton scoring after a good move and Wayne McKeon (2) pointing for Ballinamore with Ryan & Riordan O’Rourke (2) on target for Fenagh. Connaughton’s score had the potential to be a goal but he fisted over while McKeon’s point from play was first waved wide but then given on the say-so from linesman Jimmy Stenson.

Donal Wrynn then drilled two long range free excellently over the bar to put Feangh four clear but Ballinamore were pinning Fenagh in their own half and reeled over three before the halftime whistle, Niall McGovern with two and McKeon adding another free to leave the halftime score at 1-7 to 0-9 at the break.

The first ten minutes of the second half belonged to Ballinamore but incredibly, they only managed one point from a Luke Murphy free with wides from Shane Moran, McKeon and Senan Harte.

In contrast, with just two attacks in the same period, Fenagh landed great points from Riordan O’Rourke and Ryan O’Rourke (free) in what must have been a dagger blow to Ballinamore’s chances.

Fenagh started to dominate with Fergal McLoughlin curling a lovely effort over the bar before Oisin McLoughlin converted a long range free to leave them four clear. Niall McGovern thumped a fifty high over the bar but another double from the O’Rourkes, Ryan from a free and Riordan from play, had them six clear with ten minutes to go.

Ballinamore threw everything at a late rescue attempt as Niall McGovern saw a shot blocked while the subsequent 50 was short and cleared. Wayne McKeon did pull back a free with four minutes to go but wides from McKeon and McGovern were joyously greeted by Fenagh supporters.

Sub Aaron Smith shot a weak shot into the keeper’s hands but after McKeon put over an injury time free, referee Mark McCloskey blew the whistle to signal a famous Fenagh St Caillin’s victory over their famous neighbours.