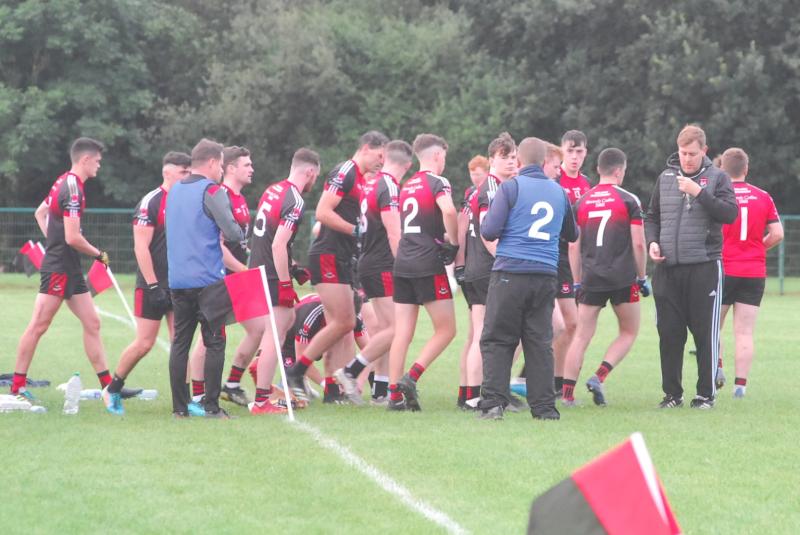 Most teams like to play down an important win but there was no disguising the satisfaction in the Fenagh camp last Saturday evening as manager Joseph Flynn praised the maturity of his young side in seeing off neighbours Ballinamore Sean O’Heslins.

That derby factor made it a special win for Fenagh according to their manager: “It was a hard fought victory, conditions were very difficult, local rivalry and all that meant it was always going to be a hard match but I’m delighted with the way the lads performed.

“Overall, very happy and what it showed was a maturity beyond their years in the way they played and hopefully they can keep progressing during the championship.”

The importance of a win in the first game cannot be underestimated either: “It will settle the nerves because our next match is going to be against Mohill so we could be going into our third match against Aughawillan, again a local rivalry, down two matches so to get two points on the board, we’re going to be looking forward rather than behind us and it is great for the young lads.”

With ten players on county senior and U20 panels, Fenagh’s preparations have been far from ideal according to Joseph: “We were a bit undercooked. I felt going into the match, we weren’t getting the challenge matches with covid restrictions so to perform the way they did, I’m very happy.

“We were down ten players for the duration of the League so I was happy with the way the lads performed, even though the results didn’t show that. You could see it there today with some of the lads who came in, Cillian O’Rourke came in for an injury and did very well, Tony Simms came in and did well. Everybody performed and that is what you want from a panel if you want to progress in this championship.”

The Fenagh manager pointed to his team’s resilience under pressure from Ballinamore after halftime as key to the victory: “Ballinamore were throwing a lot of pressure on us and we needed to break that momentum as best we could and in all fairness to the lads, they held onto the ball very well and ended up working a score or creating an opportunity. If we got the score, well and good, if it was a kickout, we could set up a press.”

The challenges of preparing a team for championship football have been complicated by Covid restrictions with Joseph explaining how tough it has been for clubs: “There was always going to be a restricted league but it was just a small thing like all the lads were called for their vaccines on one day we were supposed to play a challenge.

“So we had to pull the challenge because 12 of them were getting vaccines and we weren’t going to risk that. They are just the small things you have to manage the whole time but it is the same for every club, they are going to be looking at what players they have available, whether players are going to be isolating because that is always going to be the case in this championship. Hopefully it will settle down come the quarter-finals.”