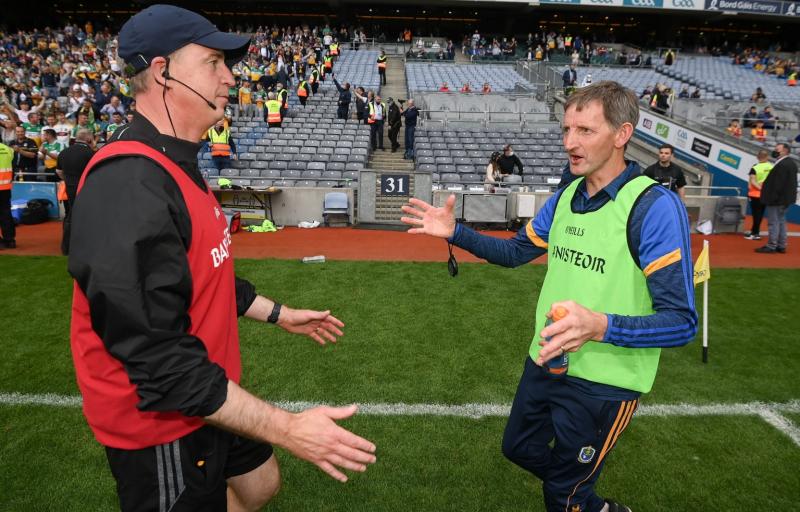 Roscommon manager, Liam Tully was very magnanimous in defeat when he spoke after their 1-14 to 1-11 loss to Offaly in the All-Ireland U-20 Football Championship final in Croke Park on Sunday.

Tully made no effort to hide his personal disappointment at the loss but he gave Offaly full credit for their win: "I'm very disappointed certainly for the group of players. We have a very sad and lonely dressing room. But we're here and 30 other counties aren't here.

"We have to look on the bright side. There could be only one winner of the two teams today and, as it happened, Offaly came out on top. In the end there was just the one score between us, and I suppose fair play to Offaly.”

He agreed that Roscommon's missed goal chances in the first half were crucial: "Absolutely. If you miss them, they don't go up on the scoreboard. They have to go in. We had the opportunities and it didn't happen.It was just the way it happened. We had opportunities in different games in different pitches and they didn't happen. It's probably one of our faults - getting the chances but not scoring a high rate of them.”

Tully felt that the third quarter when Offaly outscored Roscommon by 0-6 to 0-2 was crucial: "They worked hard and they kept us out of the game in that particular part.”

He was happy with the way Roscommon fought back after Jack Bryant's goal put Offaly 1-14 to 1-11 ahead: "We showed good character and that's in them (the players). We may have spilled the ball and taken the wrong options a few times, but fair play to Offaly, the pressure was put on us.”

He praised Offaly for their work rate and agreed that the winners won more turnovers.

"That was down to Offaly. They had the desire or maybe the extra belief or step (on us). Sometimes we were too long on the ball and that allowed them in on us. We brought it to the wire. We were probably in hard luck that we didn't get another goal but it didn't happen and we have to take it on the chin.”

14 of the Roscommon panel are underage next year but Wynne stated that this doesn't mean anything: "Whatever the amount of players who are underage next year doesn't make a lot of difference. Players change and different things happen during the year. That doesn't guarantee any player a place or anything like that. There are also an awful lot of players in the county that probably would be capable of being here today but for different reasons, when it came to trials and stuff, it didn't happen. That's it and we have to move on.

Tully talked about how they will have to deal with their defeat.

"Of course it's disappointing. We have to deal with it. Congratulations to Offaly. It's wonderful to see a county who had been very quiet in the whole scene for several years making an effort, working hard and believing in what they could do, and now they achieved.

"Yes, we have to look back on the good days. Just for a certain amount of one game, we didn't play well; that doesn't make them bad footballers. They are good footballers; it just didn't happen today the way we would have liked. It's no mean achievement to be in an All-Ireland final in any grade.”