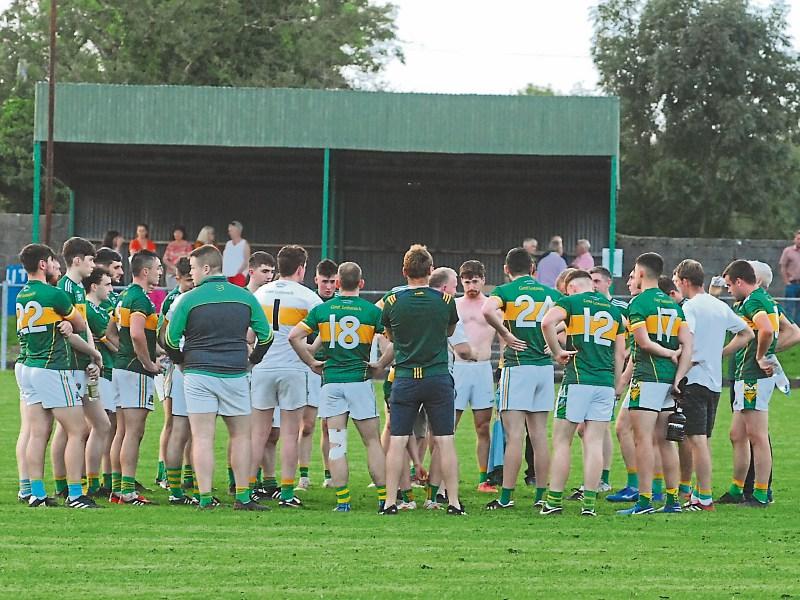 It might seem old fashioned in these days of high-tech gadgets and new fangled training ideas but Gortletteragh’s remarkable come from behind victory over Leitrim Gaels last Saturday evening was down to the fierce determination in the 2020 Intermediate champions camp.

That’s the view of manager Paul Maguire who, just minutes after addressing his team on the pitch in Gortletteragh for quite a while following the 4-12 to 1-18 victory over Leitrim Gaels, spoke of the spirit and determination in his players that proved the vital ingredient in a must win victory for the home team.

“I’m delighted for the lads,” Paul told the Observer, “It is tough coming up from intermediate to this level and it takes you time to get up to the speed of things and we weren’t helped, I suppose, with the injuries we’ve had from day one.

“James Campbell is still out, a big loss, but when you have the likes of Cathal McCrann, Gerard Campbell, Woody (Niall Woods) there, David Mulvey came into the game, Jack Heslin as well - the calibre of players we have is serious.”

Gortletteragh went into last Saturday’s game knowing anything less defeat against Leitrim Gaels would see them consigned to the relegation final, a serious blow just a matter of weeks after the highs of winning the delayed 2020 Intermediate championship and the Division 2 League Final.

But Gortletteragh struck for two goals in the final ten minutes to pick up their first win of the campaign and keep their hopes alive of reaching the quarter-finals ahead of next Friday's final group game against St Mary's Kiltoghert in Pairc Naomh Mhuire in Carrick.

Paul stressed that Gortletteragh’s players were well aware of what was at stake on the night: “We spoke during the week about that ‘lads it is knockout! Lose this evening and it is a relegation playoff' and we didn’t want to be in that place. We’re better than that.

“They have the belief that they are good enough to be competing in this grade and it just showed today - six points down and to come back and win by three. I know they had a penalty that went over the bar in the dying minutes but it was determination I suppose.”

If one incident summed up Gortletteragh’s determination, it was the vital third goal, set up by the returned Jack Heslin and finished off by Padraig Gallagher who almost collided with the woodwork as he flew in to fist the ball to the Leitrim Gaels net.

The return of their captain was a huge boost but Paul saw Gallagher’s second goal as typical of his team’s attitude: “Jack is a terrific player and he is probably carrying an injury there still. He got the scores today, top scores but the highlight of the game for me today was the determination of Padraig Gallagher to get that goal. He pegged himself at it and that just shows real determination.”

Despite the elation of the victory, the job is not yet done for Gortletteragh for they must beat, or at least draw, with last year’s County finalists St Mary’s Kiltoghert on Friday in Pairc Naomh Mhuire to ensure they leapfrog Melvin Gaels into the last quarter-final spot.

It is a game that Paul knows will not be easy but he stresses that Gortletteragh will attack it with real belief: “It is a tough game, Mary’s are finalists from last year and they’ll want to finish out on a high going into the quarter-finals so they have something to play for, to finish top of the group.