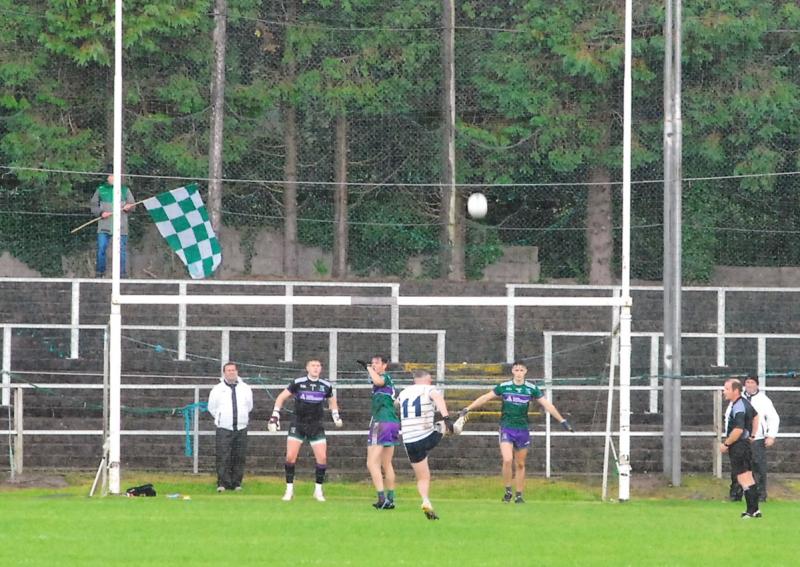 Keith Beirne converts a free late in the second half Picture: Willie Donnellan

Thirteen points from a superb Keith Beirne steered defending champions Mohill into the 2021 Connacht Gold SFC Final but not without a severe test from a battling Leitrim Gaels who pushed the hot favourites for the Fenagh Cup right to the wire in Avant Money Pairc Sean Mac Diarmada on Sunday.

Mohill had gone into the game as raging hot favourites with even Leitrim Gaels supporters apprehensive before the game but when Aidan Flynn scored a wonderful point just after the second water break, suddenly there was just a point between the teams and Leitrim Gaels looked like the team with momentum.

It was then that Mohill showed their champions' class - both sides had chances, Stephen Goldrick seeing a free claimed by Padraig Tighe and from that Mohill broke up the field, Keith Beirne tapped over a free and suddenly the gap was doubled and the champions looked more composed.

A game that seemed to be following the preordained script as Mohill led by seven points early in the second half turned wonderfully when a long ball found Enda Moreton in between Padraig Tighe and Alan Armstrong. The Gaels full-forward looked to have fluffed his chance as the ball fell from his grasp but it actually helped him as he got around Tighe and managed to bundle the ball across the line.

The goal felt very similar to Mohill's own goal midway through the first half - a shot rattled the Gaels crossbar but Jordan Reynolds managed to dive in and force the ball across the line as the champions seemed to be able to keep Leitrim Gaels comfortably at arms length during the first half.

Much of that comfort was down to an excellent display from Keith Beirne - if there is a concern that Mohill are relying too heavily on Beirne, the answer should be "why not" for the County man plundered 13 points in total, including seven from play in the first half as he uncharacteristically failed to score from three placed balls.

Beirne was the fulcrum of Mohill's attack but their support play and hard running had the Gaels chasing shadows for most of the first half. Mohill actually scored straight from the throw-in, Keith Keegan's strong run leading to a Beirne point after just 10 seconds. Stephen Goldrick replied from a free but another Keegan run led to another Beirne point on four minutes.

Goldrick had another free sandwiched between points from Oisin Madden and Beirne before, 14 minutes in, Mohill took control with Jordan Reynolds' goal. Enda Moreton replied instantly with a long range effort set up by Eunan Treacy but two great Beirne points, one set up by great work from Domhnaill Flynn & Alan McLoughlin, extended the lead to six points.

Enda Moreton scored a nice point from a mark but Beirne responded with a point two minutes from the break. Leitrim Gaels did have the last word with a good point from Treacy to leave Mohill leading by double scores at the break, 1-7 to 0-5.

Mohill looked as if they were stretching their legs when Beirne converted two frees in the first four minutes of the second half. Aidan Flynn, moments after a booking for dissent, turned over possession and broke forward to win a free converted by Stephen Goldrick on six minutes.

A minute later, the game was back in the melting pot when Enda Moreton claimed his goal and when Goldrick reduced the gap to just a goal from a free, the crowd was really in the game, Leitrim Gaels and Mohill fans making their voices heard. Keith Beirne missed a free but it got a touch on its way out and Mohill's star man made no mistake from the fifty.

A poor Mohill clearance allowed first half sub Shane Rynn, on for an injured Conor Guckian, to point and when the Gaels repelled a Mohill attack, a long ball found Aidan Flynn on the wing and he swept over a lovely point to leave just a point between the teams with 13 minutes to go.

Brendan Flynn claimed a Beirne free that fell short before Colm Moreton shot wide from distance and Stephen Goldrick left a free into Padraig Tighe's hands. It was a counter attack that led to Keith Beirne free that was given after a little bit of indecision from the umpires.

Padraig Tighe did well to punch clear a Eunan Treacy shot under fierce pressure from Stephen Goldrick but Leitrim Gaels' hopes evaporated when David Bruen, already booked, dragged down Keith Keegan after he was put through. A black card followed meaning he was dismissed with Beirne converting the free to leave three points between the teams.

With Leitrim Gaels now a man down, Mohill started to stretch clear - Sean Harkin became just the third point scorer for Mohill when a long ball to sub Fiachra McGuinness created the danger. Fittingly, the last word fell to Keith Beirne as he converted a free and then scored from play after a short free to seal a Mohill victory.

Mohill will face Ballinamore Sean O'Heslins in the Final on Sunday October 17, as they seek to win back to back titles for the first time while Ballinamore will seek to win their first Senior title since 1990.