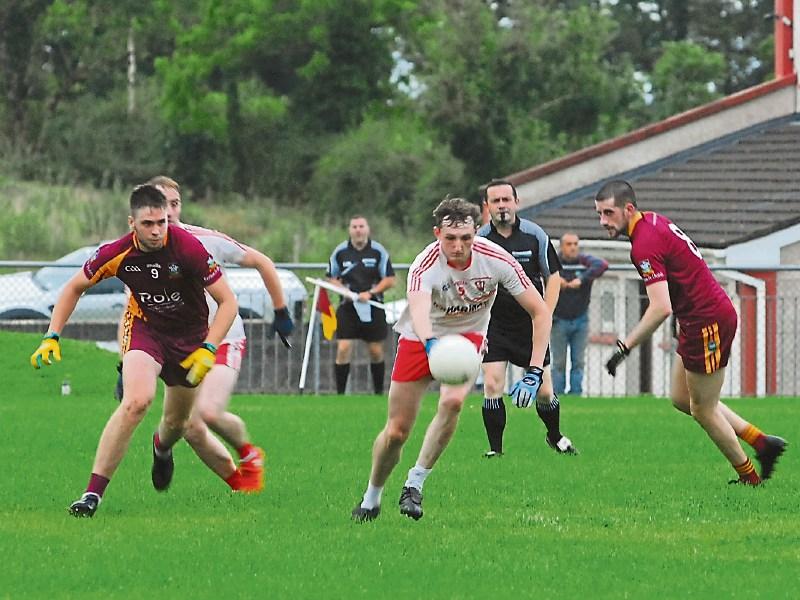 We're down to the last four in the Smith Monumentals Intermediate Championship and all we can expect from next weekend's semi-final is the unexpected with two intriguing games that are very much up in the air right now.

A few friends from Annaduff jokingly asked me not to back them in the previews this week after I said their quarter-final joust with Drumkeerin was too close to call and after last weekend's senior semi-finals, putting your head on the block is a risky business.

Without trying to offend those in Ballinaglera and Kiltubrid camps, a few have opined that Saturday's contest between Annaduff and St Patrick's Dromahair is what fans like to call the “real final” but honestly after what Ballinaglera did in the quarter-finals and having seen Kiltubrid a couple of times, that does them a disservice - although whoever gets to the final will gladly grab the underdogs tag!

There is one quirky fact about the quarter-finals - we all know that the four teams competed in the same group but they also faced each other in the final round of group games just four weeks ago this weekend with Annaduff winning by a goal and Kiltubrid having nine points to spare against Ballinaglera! Will that mean anything next weekend - probably not but a fun fact all the same!

We take a brief look at both games and make a prediction that may, or may not, but most likely not, pan out on the day!

Wow, where to start with this one. The teams met in the final round of the group stages with nothing really at stake, Annaduff prevailing on the day but both sides were nowhere near full strength - Ray Cox not playing for Annaduff and Dromahair holding back three or four starters so hard to make any judgements.

Hard to argue that Annaduff had the sternest test in the quarter finals, a one point win over Drumkeerin in a fabulous contest told us a lot about their resolve and determination to make it back to the final. But it also told us how important Ray Cox is to their challenge and manager Joe Cox looks to have found the perfect way to make the most of Ray's talents in introducing him off the bench.

Dillon Keane, Conor Reynolds, Hugh Moylan, Sean McNabola, Darragh Burke and Liam Taylor are all key performers but when Ray is on the field, he is almost like a security blanket for his teammates, lifting them and giving them confidence.

The same can be said for Martin Feeney and St Patrick's Dromahair. James Clancy, Gary Fowley, Rory Kelly, John McGoldrick, Shane Fowley and especially Jamie Conlon have all been huge for the north Leitrim side in this campaign but Feeney gives them that little bit extra and that bit of reassurance.

Feeney is more than just a freetaker, although he is pretty good in that regard despite a blip in the quarter-final, as he is often the target man and playmaker but you'd be mad to discount the impact James Clancy and Gary Fowley have is huge, their pace and ability to create scoring opportunities and win frees is crucial.

Dromahair did have problems in countering Damian Moran in the quarter-final but do Annaduff have someone who can do the sort of damage the former Leitrim player can do. The Dromahair defence work almost as a swarm, getting back in numbers but they will get a different test from a very mobile Annaduff unit with quite a few threats in different sectors.

This isn't a cop-out but I genuinely have no idea how this is going to turn out. I was impressed by both in the quarter-finals, they are well balanced, fit and hard working and, more likely than not, will come down to a mistake or a moment of magic. Both have the ability to win tight games and run up big scores so who knows.

If I was pushed to make a decision, I think Annaduff's tougher quarter-final may just stand to them so they get the dreaded nod - but don't put any money on it!

An unexpected pairing that few of us expected but probably the game that has the most questions, the most intrigue and definitely the most excitement.

Kiltubrid easily beat Ballinaglera in the group stages, winning 1-16 to 0-10 but given how Ballinaglera performed in the quarter-final, I think we can throw out everything we thought we knew about them. They might have won just one game in the group stages but three rather convincing losses wouldn't have given you much hope for them.

Some argue that the awful conditions their clash with Drumreilly was played in helped them out but the qualities Ballinaglera displayed that day - controlled aggression, direct and powerful football and a willingness to fight for every ball as if their lives depended on it - translate into winning games in any conditions.

If there is a worry about Ballinaglera, it may be that they don't really score that heavily with 11 points their highest tally so far in this campaign. Having said that, we're into a time of year where scores, no pun intended, dry up so ten or 11 points may be enough.

Kiltubrid go into the game on a high after the drama of their win over Aughavas - a game that could have gone either way, Kiltubrid showed real killer instinct when it mattered most but what I took most from the game was that their defence stood tall. Up to this, it was their forwards getting all the attention but a miserly Kiltubrid backline really starred that day.

Kiltubrid will be desperate to have former County star Shane Foley on the field, he left the semi-final limping and he would be an enormous loss - not only for his own ability but for his leadership and experience. Fergal McWeeney & Diarmuid Mac Thiarnain have been superb this year as has Aidan McKiernan in attack.

Much of the talk about Kiltubrid this year has focussed on their youngsters Barry & Danny McWeeney and Fionn O'Brien. Kiltubrid need all three to make an impact on Sunday and given how they have played so far this year, I'd have no worries on that regard.

On what we witnessed in the quarter finals, you have to give Ballinaglera the nod ... on form over the entire competition, Kiltubrid are the team so take your pick! My pick - I've been really impressed with Kiltubrid but I can't escape the feeling Ballinaglera are the team in form right now - clear as mud as they say!