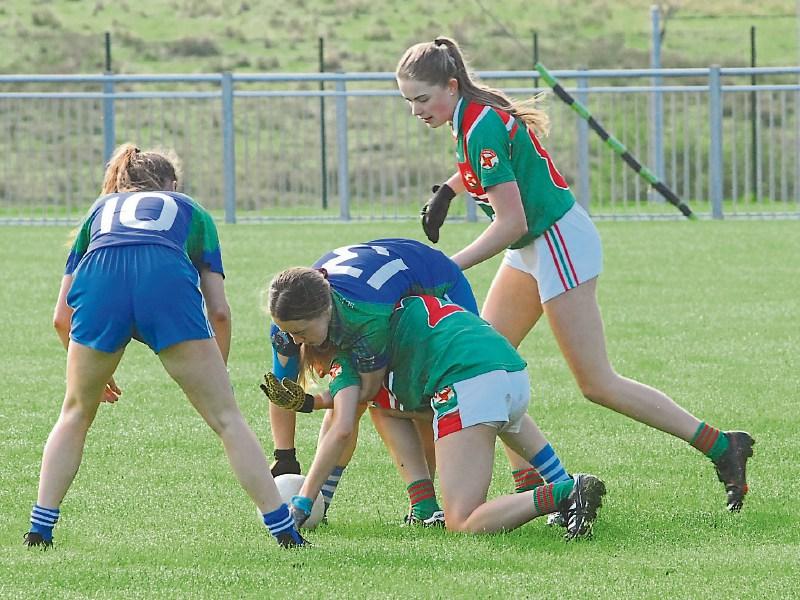 St Joseph's and Kiltubrid in action in the group stages and they meet again on Sunday Picture: Willie Donnellan

No rest for the wicked, as they say, but no rest for the Ladies footballers of the county who head straight into knockout football next weekend.

Nobody gets a rest, apart from defending Senior champions Glencar Manorhamilton who get two free weekends to fine tune their preparations for the Senior A Final, while their rivals go through the Senior B semi-finals and final.

It is a tough schedule for players and while it may make sense to clubs to get competition finished early, it can't be easy for players to potentially be in championship action for seven straight weekends!

We take a brief look at the two senior and intermediate semi-finals:

Ballinamore Sean O'Heslins v St Francis: On the face of it, an easy one for last year's finalists who suffered a narrow three point loss to Glencar Manor last Sunday, their first of the campaign. Ballinamore blitzed St Francis 5-19 to 1-9 just two weeks ago so hard to see how the Allen Gaels and Ballinaglera contingent can overturn that in such a short space of time. They will battle and battle but you have to expect Ballinamore to advance.

St Joseph's v Kiltubrid: Now this is a tricky one to call. St Joseph's had a big win over Kiltubrid in round 2 and were convincing winners but Kiltubrid are past masters at learning from their experiences and improving from game to game - just look at the trouble they gave Ballinamore in last year's semi-final. Kiltubrid will rely on Michelle Guckian but they need to give her much greater support. St Joseph's know they have to close down the avenues to the Leitrim star but they are improving with each game, even if their star Michelle Heslin has been restricted by injury. This will be tighter than most expect but you have to go with St Joseph's.

Dromahair v Drumkeerin: Again, on paper, this one seems pretty straight forward. Dromahair have beaten all comers and handed their neighbours a hefty 3-20 to 0-3 victory in the round robin stages. Hard to see Drumkeerin closing that gap as the favourites should march on

St Mary's Kiltoghert v St Brigid's: This a tricky one - St Mary's won the group stages contest quite convincingly, 3-10 to 0-8 but St Brigid's pushed Dromahair right to the wire just a week later and will have been targeting this game all the time. How much their loss to Dromahair affects the Carrick team is hard to tell but if they can bounce back from their first loss, albeit a pretty convincing defeat, they should prove too strong. However, you never know with St Brigid's and we could get a shock here.