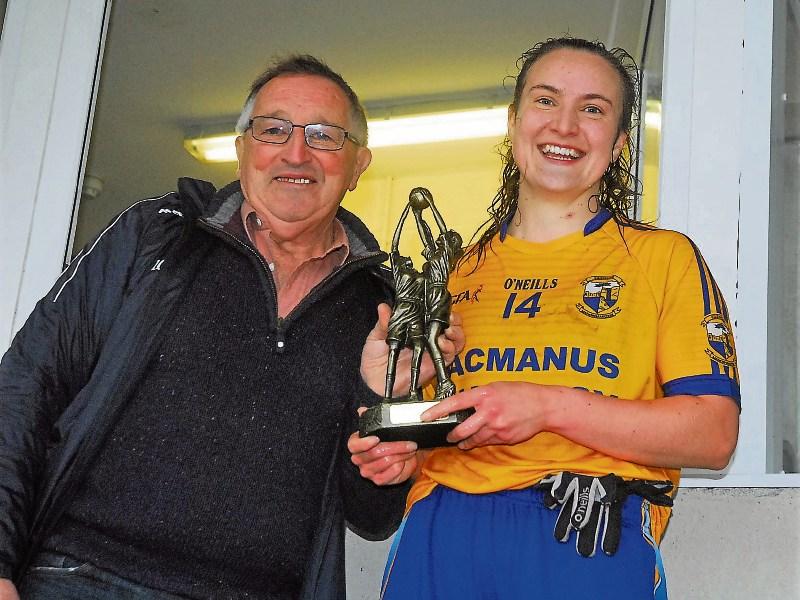 Winning a player of the match award in a county final is the stuff of dreams. To win it back to back must be a special feeling and to be fair, Ailbhe Clancy admitted she was delighted to receive the Gotham Dry Wall LGFA Senior A Final Player of the Match award last Sunday in Ballinamore.

“Pretty happy to be fair,” said the Glencar Manorhamilton star of her reaction to the award, “I put them over at the end but honestly, and probably everyone says this, but I think you could have genuinely given that to nearly everyone on our team. Rebecca, Mary Alice, Eadaoin, Aoife G in midfield was absolutely phenomenal.”

That team ethic is obvious in Ailbhe’s delight at regaining the title: “We’re just delighted, it was such a team performance. I think when things were going against us, everybody stood up and it was just a mighty performance by everyone. It just kind of proves that this is where we’re meant to be and it is ours now and people are going to have to come and step up again to take it back off us.”

The fact that they did it without Muireann Devaney and Dearbhla Rooney only came on as a sub underlines the strength in depth of this Manor squad: “Obviously Muireann is a brilliant player and we had Dearbhla as well who couldn’t start for us today but I think it shows the training we have done over the past few years and the panel we have that you wouldn’t even have noticed that Muireann was gone today.

“We’ll miss her and hopefully we will have her back for Connacht but we will just keep on going.”

Glencar Manor expected a tough battle from St Joseph’s so beating their long time rivals made this even sweeter: “Us against St Joseph’s is always a big rivalry so to beat them in a final is always a huge thing. It was tough this year not having semi-finals and having to top the group but we’re just buzzing to be here at the end of the day.”

But Ailbhe and her teammates are not finished yet with Glencar Manor setting their sights on a Connacht Senior Club campaign: “Oh yeah, 100%. I think we can get back training hard and really focus and we can rattle anyone in Connacht.”