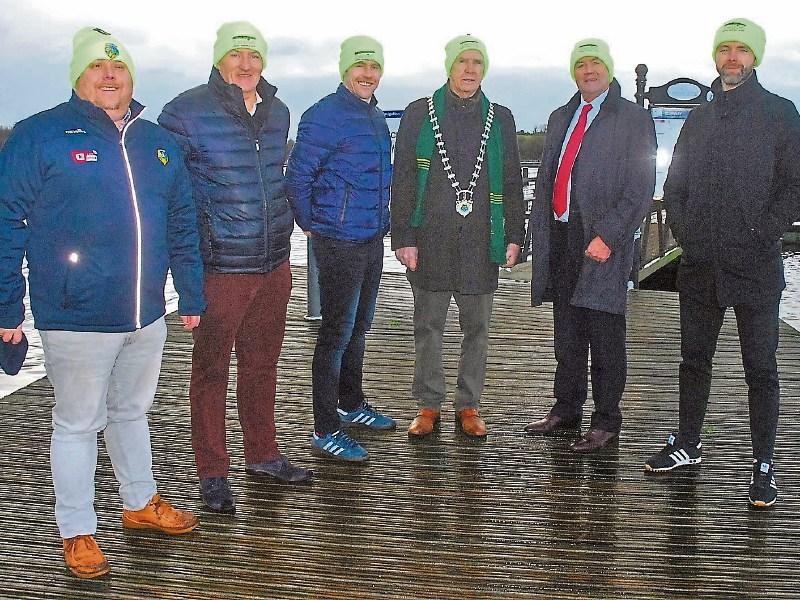 It may be billed as a fundraiser but the sense that Leitrim GAA's “50 Miles in January” challenge is more of a community of Leitrim people from all over the world coming together was reinforced at the launch of the 2022 event last Saturday in Drumshanbo.

New Leitrim Senior team manager Andy Moran launched the 2022 edition on the banks of the fabulous Blueway Walk at Acres Lake and presented one of the specially commissioned “Leitrim GAA 50 Miles in January” hats to the family of the late Francis Harte, a Dromahair native living in Dublin who did so much to promote the first edition of the fundraiser last year.

It was that spirit that Leitrim GAA Chairman Enda Stenson touched on when he spoke of just what the “50 Miles in January” challenge means to Leitrim's diaspora all over the world: “We were totally taken aback last year, people from New York, Liverpool, Boston, out in Amsterdam, Utah where the Whitneys were, Donncha Lynch out in Australia, they did phenomenal work, we were totally taken aback by it.

“We are so indebted to everybody but it was all about those people standing up for Leitrim. I know we are all proud of Leitrim, we might be small but we are resilient and we are so proud of where we come from.”

Urging Leitrim people everywhere to get behind the challenge, Enda added “We don’t have the big sponsorship and we are depending on the people of Leitrim and anybody with a Leitrim connection to support Leitrim.

“But this challenge is more about Leitrim as a whole rather than the GAA, it is about promoting the county, getting people out walking and the fundraising is invaluable for the people of Leitrim. We need the couple of pound but we have to promote our county and it is Leitrim first for the people of the county. I just want to thank the Leitrim people from the four corners of the world who are going to participate with us as they did last year.

“It was a tremendous success and I hope this year is just as successful. I would just appeal to people to get out, do the walk, do the challenge, wear your Leitrim cap - it will be recognisable everywhere you go.”

Former Leitrim and Glencar Manorhamilton footballer Adrian O'Flynn who came up with the idea last year was thrilled with the response: “It was something that was a last minute thing when things looked tight for the Supporters Club launch and as soon as we put it up, it took off. It was really the Facebook group of Leitrim people coming together that made it work.

“It was just the sheer enthusiasm of Leitrim people chatting to each other, supporting each other and pictures from around the county, they enjoyed it and raised €100,000. The amazing part was people loved doing and raising money.

“We had Santiago Chile, we had Bermuda and it didn’t made no difference whether you were in Annaduff or Texas, the Leitrim connection brought the whole thing together, people sharing stories of going to matches in the 80s and 90s.”

This year's challenge is a little bit different with organisers hoping people cast their net a bit wider in search of sponsorship says Adrian: “We have a few different things this year where we are encouraging people to set up their own fundraiser, get the free luminous hat and set up your own fundraiser. You will be able to get more money from outside the county and people will still enjoy this experience whether it is a lockdown or not.”

“You can do something to really make a difference - if you raise €150, €200, it might pay for a development squad training session or a bus for a group of U15s and really improve Leitrim football and make a difference on the field. That was the big thing I took away from last year.

“You look at what Club Rossie have achieved and how they have supported Roscommon.

“As Leitrim supporters we can do more and support Leitrim. This challenge this year is a chance for people to get involved, go for a few walks, stick your neck out and share your fundraiser on whatsapp, email or whatever and ask for money and really make a difference for Leitrim football,” said Adrian.