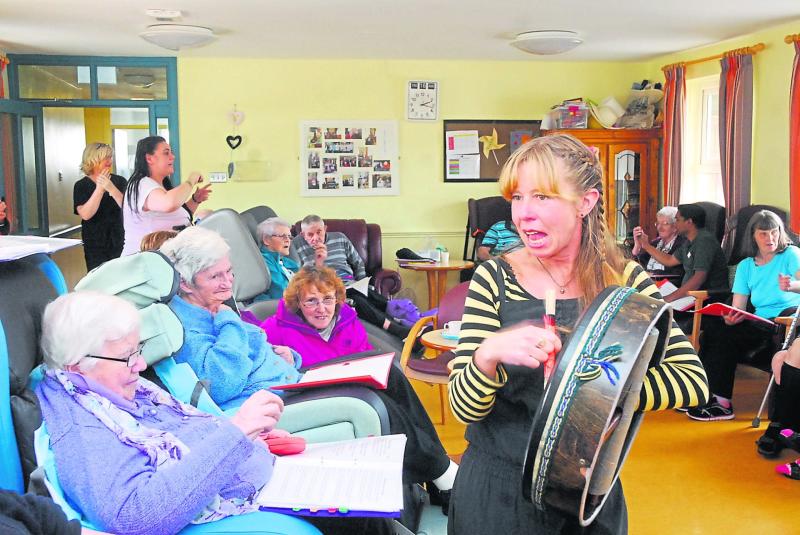 Music is a powerful tool, it can change your mood, conjure images and invoke powerful feelings and it is being used to great effect by Shailagh Healy to help elderly residents of nursing homes to boost their memory.

Shailagh facilitates music session/ work(play)shops with residents at a variety of nursing homes in Sligo and Leitrim.
The Leitrim Observer were guests at a very lively session at Arus Breffni, Manorhamilton last week and saw first hand the happiness and joy it brings to the residents.

18 residents took part in the session and all of them played their part singing, tapping their feet, humming, or rattling an egg shaker. There was guitar and bodhrán lead tunes and some quiet recitals. Shaliagh is so enthusiastic and she gets everyone to interact in their own way. 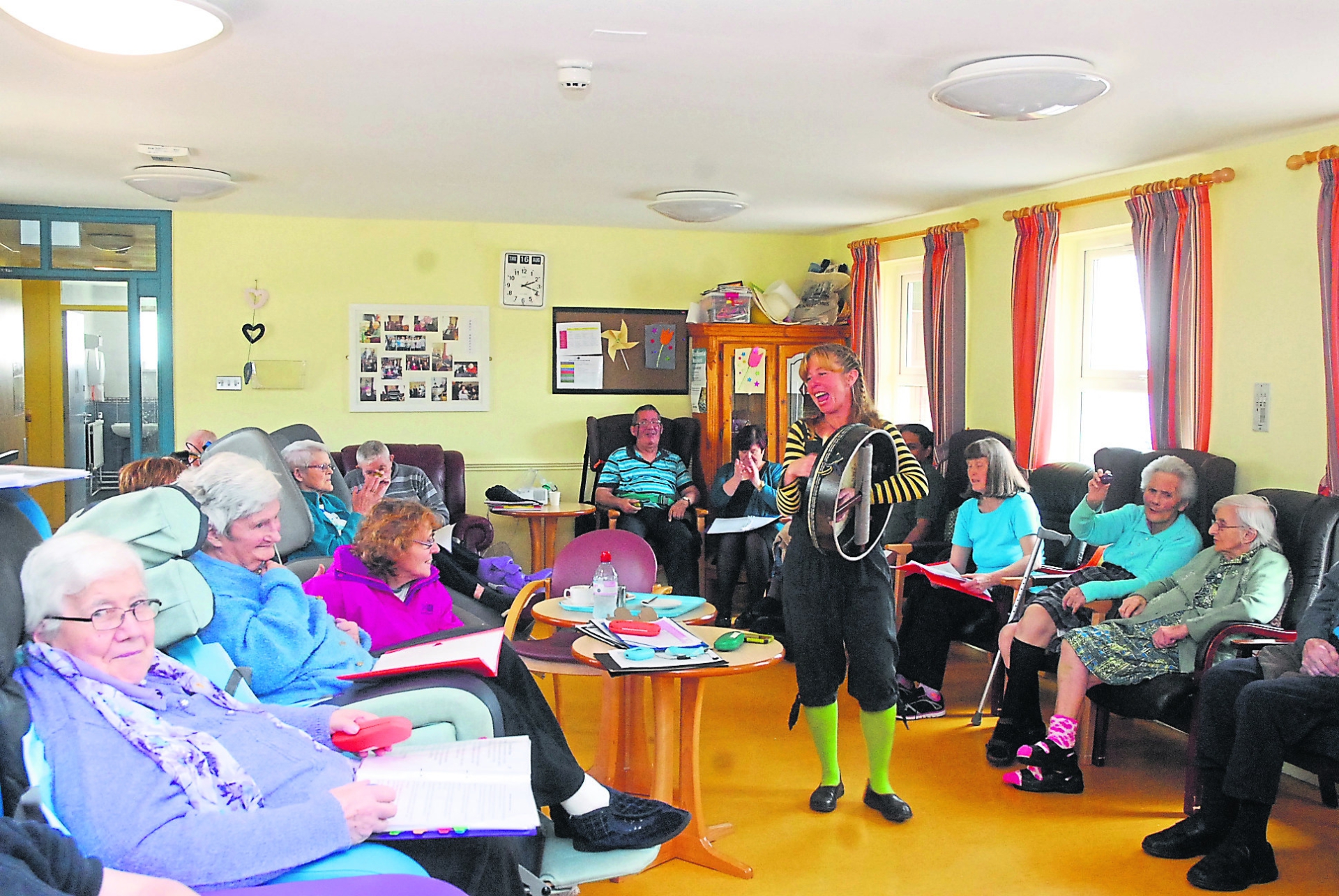 Nursing home staff told the paper the residents look forward to seeing Shailagh every week, it is the highlight of their week.
There were group songs and solo singers, but the most rousing tune was “Lovely Leitrim” which they all belted out with delight.

Shailagh is a musician and dance teacher. She coordinates an hour with the seniors consisting of low impact movement and high impact enthusiasm for song requests which are compiled in a group book of old time and colloquial songs.
Shailagh told the paper, “I love to see people come alive because of music.” She said some can have high dementia or be non compus mentus people who barely lift their head and then “an old song triggers a memory.”

The music therapy sessions are funded by the HSE. Shailagh, who is originally from Canada, has been voluntarily singing for years with groups, she lives in Manorhamilton and says the North West of Ireland is “the most beautiful place in the world.” She said she would love to see the project recognised throughout Ireland. Shailagh said a song could invoke a memory, an image or a story, “some even do a few steps if they can.”
Glamorous Bridie Ryan from Glangevlin, Co Cavan told the paper she loves singing and enjoys the sessions.

Michael Rooney from Glencar gave us a rendition of a song called “Maggie Thatcher” and he said Shailagh “brings a great atmosphere, she brightens the place up.” 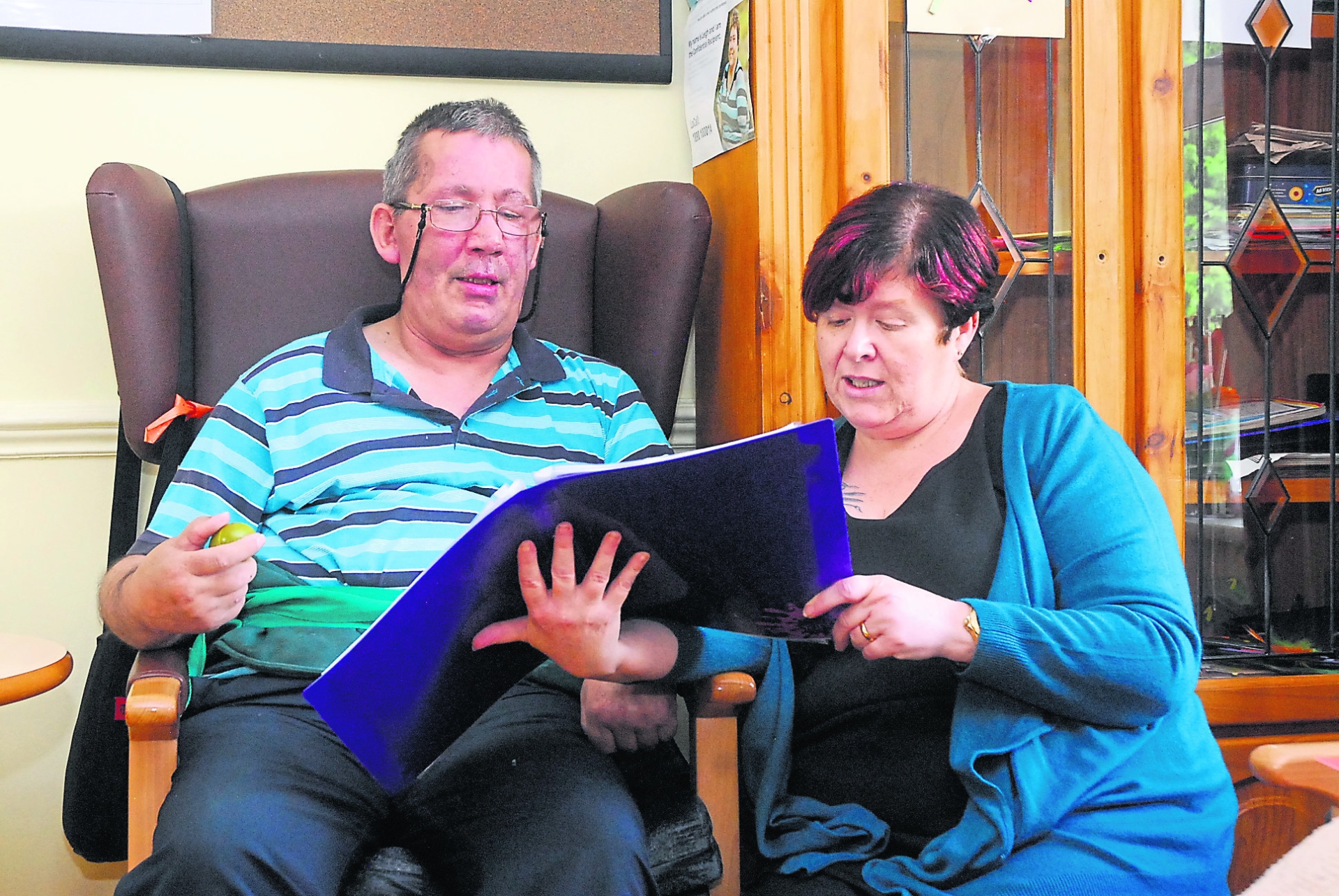 Thady Rooney from Glenade who is about to celebrate his 73rd birthday shortly called Shailagh “A mighty singer” and he said he loves the music.

Shailagh works with Arus Breffini HSE nursing unit in Manorhamilton and St Patrick's Hospital in Carrick-on-Shannon.
She also works with other nursing homes and residential units in Sligo.
Seeing the benefits of music to the people, Shailagh is hoping to bring her service to more centres. “It is a real trip down memory lane.”

“Each day I see another person who is otherwise “shut down” come alive and extract a whole song (word for word) from their childhood. I have seen the almost miraculous effect music and memory have on people with heavy dementia and similar conditions and feel so privileged to share in these moments,” she said.