Increase in violence towards Leitrim gardai 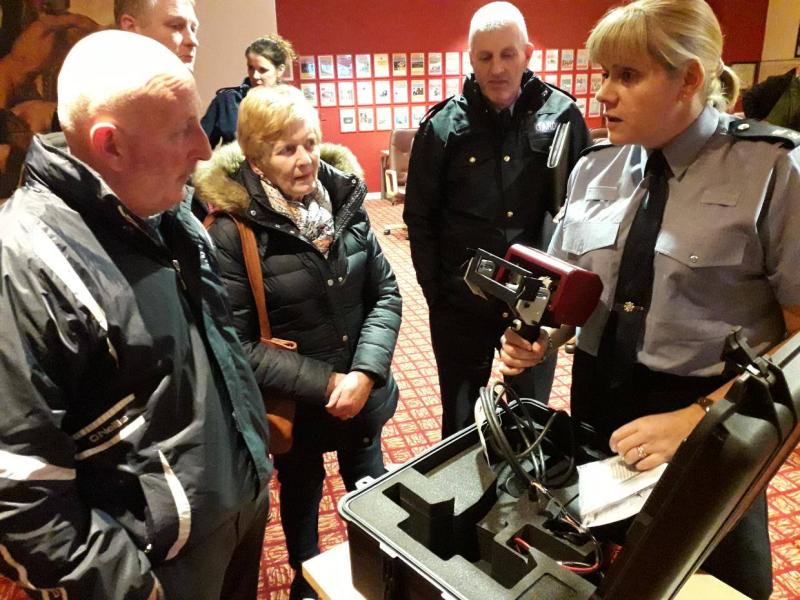 Community Sgt Orla McGrath showed members of the public who attended the JPC meeting the new property marking machine, which will engrave machinery and items of value to help prevent theft

Leitrim superintendent Kevin English is “concerned at the levels of violence and aggression” shown towards local gardai over the past year.

Supt English made the comments at the Leitrim County Council public Joint Policing Committee meeting in Carrick-on-Shannon last Monday night, March 11.
The superintendent noted that two Carrick Gardai were injured at the weekend while dealing with an incident involving a stag party. He said one was directly assaulted and the other was injured during the incident. He said “the increased level of violence at night is a concern” and he must balance the resources being used to service the “vibrant night time economy in Carrick-on-Shannon” against the other demands of the county.

Crime figures for the county last year show a major decrease in most areas except public order and drink driving.
While public order offences were up 12% in the county, Supt English said these were crimes detected by gardai and that garda numbers have been increased at peak times of public order instances.
The garda team were happy to report assaults are down 20%, criminal damage is down 13%, burglaries are down 41% and thefts from shops have decreased by 10%.
Drink driving arrests did increase with 70 people arrested for the offence in 2018, compared to 57 in 2017.

The county had two road fatalities last year, four serious car crash injuries and 38 non serious road traffic accidents reported.
Supt English said the number of drink/drug driving checkpoints will increase in the county this year and he remarked “If we save one more life, it is worth doing.”

Carrick-on-Shannon Gardai said they are looking forward to the CCTV system due to be installed in the town later this year and Supt English said this will help gardai to manage their own resources better.

Manorhamilton
Chief superintendent Aidan Glacken said he was delighted that Manorhamilton now has an inspector. The area has not had an inspector in the past six years and he welcomed Inspector Pat Harney to the important role.

Mr Glacken said there are more resources being put into Leitrim and that the border is an integral part of the policing here.
Community Sgt Orla McGrath gave a presentation on community policing in Leitrim and she told the meeting there are 14 text alert schemes in the county, while more are welcomed they also hope to amalgamate the text schemes to help with county wide crime.

Sgt McGrath said she will be visible and engaging in local communities so that people feel more in touch with gardai and at ease with reporting crime or suspicious activity.
She also wants to re-energise Business Watch and hopes to help educate young people and local community groups on policing in Leitrim.