Lack of home help hours in Leitrim is a 'national scandal' 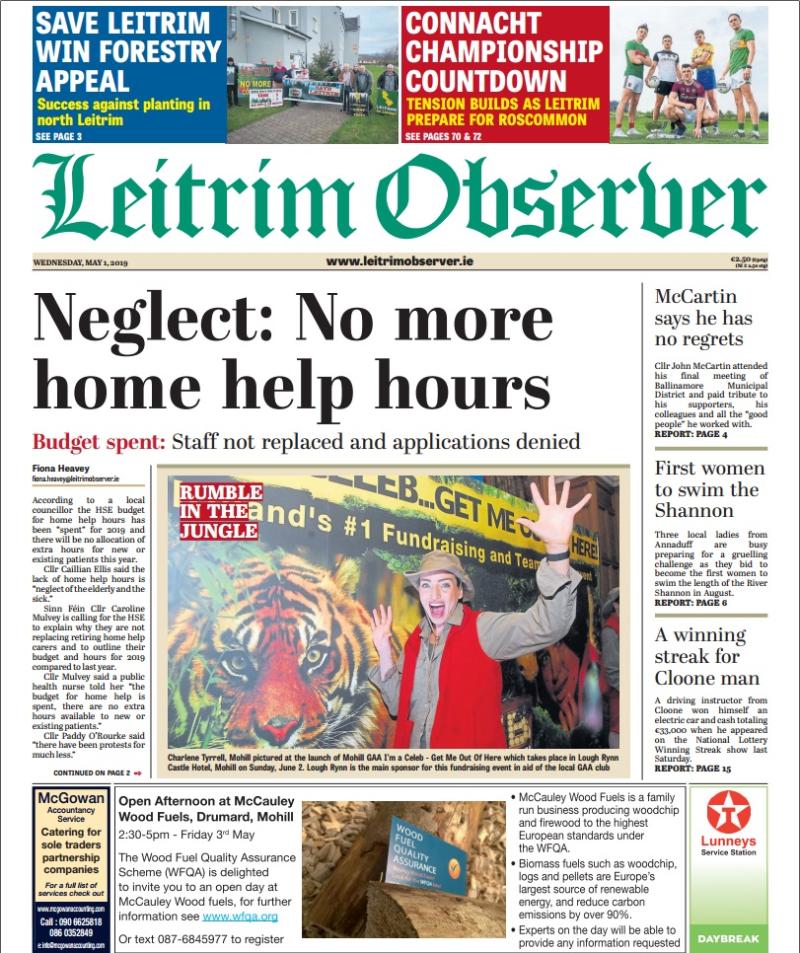 Following on from our front page story on May 1 about the lack of home help hours and the claim that the budget has already been spent by the HSE in Sligo Leitrim for 2019, one councillor called it a “national scandal.”

Cllr Mary Bohan called on the Minister for Health Simon Harris and the HSE to provide adequate home help hours and home care packages to those who urgently need them.
The Drumkeerin Fianna Fáil councillor said the minister “should hang his head in shame” over the treatment of our elderly who worked hard all their lives.

Cllr Bohan said there are 6-7 patients in Our Lady's Hospital, Manorhamilton who “could be discharged if home help was available.”
Cllr Bohan also noted the story of a 92-year-old man in Sligo University Hospital who was kept for 70 days because he had no home help.

She said the consultant cardiologist Dr Donal Murray described it as a crazy situation and a miracle he had not caught a bug on the ward.
“At the same time there were over 50 patients on trolleys in Sligo hospital,” she stated. She said these people are effectively holding onto a much sought after hospital bed, through no fault of their own.
Cllr Bohan said she has never seen an issue affect so many people; “almost every family in Leitrim is dealing with this.”
Cllr Bohan's motion was fully supported by all her council colleagues at last week's council meeting with many saying it is the most frequent issue being heard on the door step canvas.

Cllr Felim Gurn said he understands there are 600 people in this area on a waiting list for home help.
Responding to our story where Cllr Caroline Mulvey claimed the HSE budget for home help hours has been “spent” for 2019 and there will be no allocation of extra hours for new or existing patients this year, the HSE said “services must be delivered within available resources.”

A spokesperson for the HSE stated: "The allocation of funding for home support across the system, though significant, is finite as services must be delivered within available resources.
“Despite the significant level of service provision the demand for home support continues to grow.
“All those waiting are assessed and provided with a service based on clinical need and as soon as resources become available.”