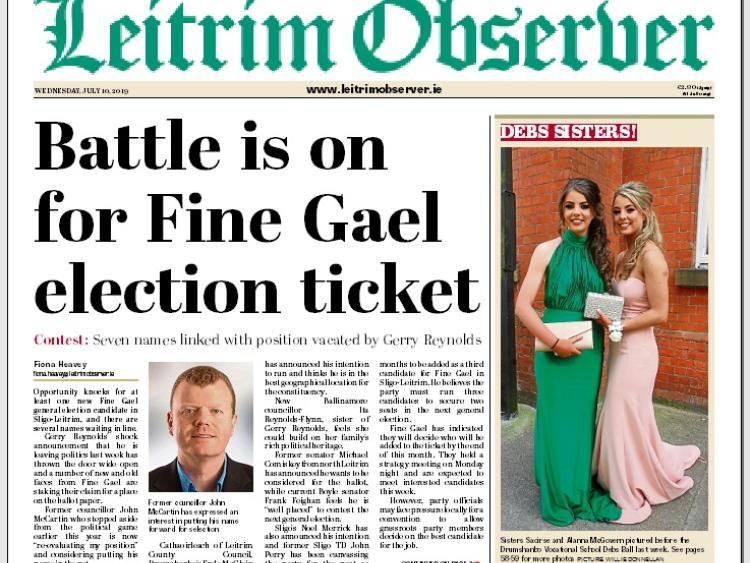 Opportunity knocks for at least one new Fine Gael general election candidate in Sligo-Leitrim, and there are several names waiting in line.

Gerry Reynolds' shock announcement that he is leaving politics last week has thrown the door wide open and a number of new and old faces from Fine Gael are staking their claim for a place on the ballot paper.
Former councillor John McCartin who stepped aside from the political game earlier this year is now “re-evaluating my position” and considering putting his name in the pot.

Cathaoirleach of Leitrim County Council, Drumshanbo's Enda McGloin has announced his intention to run and thinks he is in the best geographical location for the constituency.
New Ballinamore councillor Ita Reynolds-Flynn, sister of Gerry Reynolds, feels she could build on her family's rich political heritage.

Former senator Michael Comiskey from north Leitrim has announced he wants to be considered for the ballot, while current Boyle senator Frank Feighan feels he is “well placed” to contest the next general election.

Sligo's Noel Merrick has also announced his intention and former Sligo TD John Perry has been canvassing the party for the past 12 months to be added as a third candidate for Fine Gael in Sligo-Leitrim. He believes the party must run three candidates to secure two seats in the next general election.

Fine Gael has indicated they will decide who will be added to the ticket by the end of this month. They held a strategy meeting on Monday night and are expected to meet interested candidates this week.

However, party officials may face pressure locally for a convention to allow grassroots party members decide on the best candidate for the job.