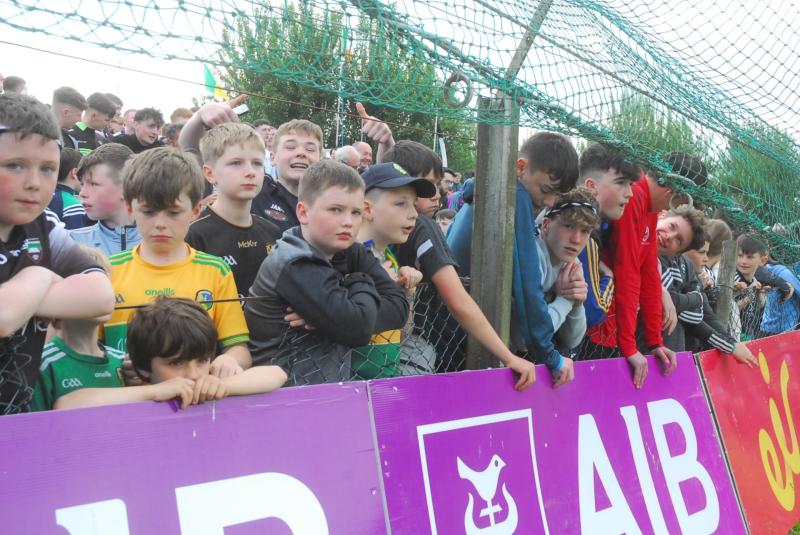 Young Leitrim and Sligo fans gather behind the goals for the Tailteann Cup penalty shootout against Sligo Picture: Willie Donnellan

Contrary git that I am, I'm going to go against the prevailing mood and proclaim that penalty shootouts are the way to go because I don't think I ever saw Pairc Sean Mac Diarmada so utterly in thrall to a singular nerve-shredding event as we witnessed last Sunday!

The temptation here is to go off on a rant about the  imbroglio surrounding Shane Moran's disallowed goal but right now, as I recall those gloriously tense moments between each spot kick, I can't think of an occasion in that vaunted stadium where the entire crowd was so enthralled by what we were witnessing.

I'm avoiding the temptation to do the traditional deep-dive into where the game was won and lost, Leitrim's brilliant start and finish masking long periods of struggle because this game was all about emotion and heart and that is where we should start and end.

The de-facto reaction is to bemoan  penalty shootouts but my thinking is that every single person who was lucky enough to be in Pairc Sean last Sunday will remember it to their dying days!

From kids running from the Castlecarra end to the town end to get behind the goal for the penalty shootout, to the jeers and cheers of fans of both teams, to the sight of players making the long lonely walk  up to face their moment of truth to wondering just how Brendan Flynn and Aidan Devaney were enduring all this, every sense tingled to the nth degree.

Some will say that's no way to decide a championship game but by God, I don't think I've ever experienced anything like it and it has come about thanks to the whole furore about the plight of club players and  the Club Players Association demand to shorten the inter-county calendar. 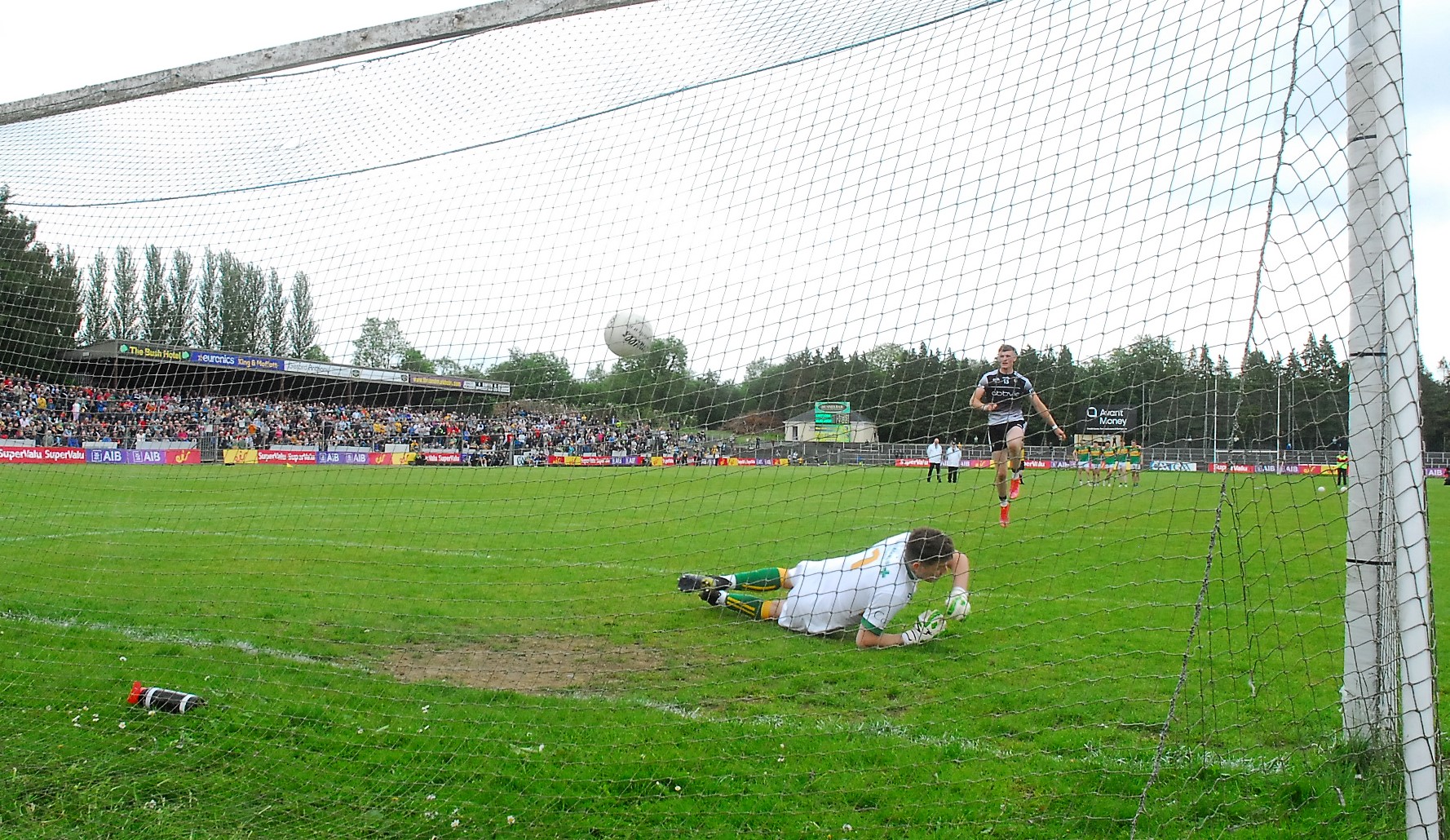 The ball ends up in the net after Brendan Flynn gets a hand to Alan Reilly's spotkick Picture: Willie Donnellan

Sunday's dramatic denouement  is the result and I say thank God for that because, and I'm being quite deliberate here in how I phrase this, I don't think I've ever enjoyed a Leitrim defeat as much as I did last Sunday evening, but let me explain before you decide to lynch me!

Of course I'd have been much happier had Leitrim won the game but think about what we all witnessed at the town end in Pairc Sean - hundreds of young, and not so young, fans roaring, shouting, praying as each player stepped up to take their kicks. Many couldn't watch and I'll bet more than one fan, from both teams, turned to prayer in those stressed out moments.

Think back to the giddy moments after a successful kick, the roar of delight that greeted Brendan Flynn getting his hand to Alan Reilly's second kick for Sligo only for those cheers to turn to groans milliseconds later as the ball nestled in the net.

Just imagine how the Leitrim fans, more partisan and engaged than they have been at any time since Terry Hyland's promotion campaign back in 2019,  would have reacted had the Green & Gold prevailed in Sunday's shootout.

If there was a way to lose, this was it - Leitrim didn't lose, they just didn't come up trumps in the lottery of penalties and you could see hope for the future and pride in Leitrim's performance blossoming as fans thronged around the players on the pitch afterwards.

It wouldn't be the GAA without a controversy and the decision to disallow Shane Moran's goal just seconds into the first period of extra-time was wrong, plain and simple - there's no other way of saying it but it was a mistake.

I'm adverse to the notion of “whataboutery”, one error doesn't cancel another and who knows what might have happened had the goal stood. Odds are it would have inspired Leitrim -  it certainly got the crowd going with a roar as loud as anything I've ever heard in the McGovern stand but nobody can be certain, and I mean 100% certain, Leitrim would have won.

As errors go, it is still some way behind the penalty Leitrim 'received' back in 1997 to send a Connacht meeting with London to extra-time, a game where the Exiles were seconds away from winning but these things are in the eyes of the beholder.

I believe, and this is only my opinion, that the lift Leitrim would have got from the goal might just have been enough to see Andy Moran's side into the semi-finals and a Croke Park appearance but we'll never know. 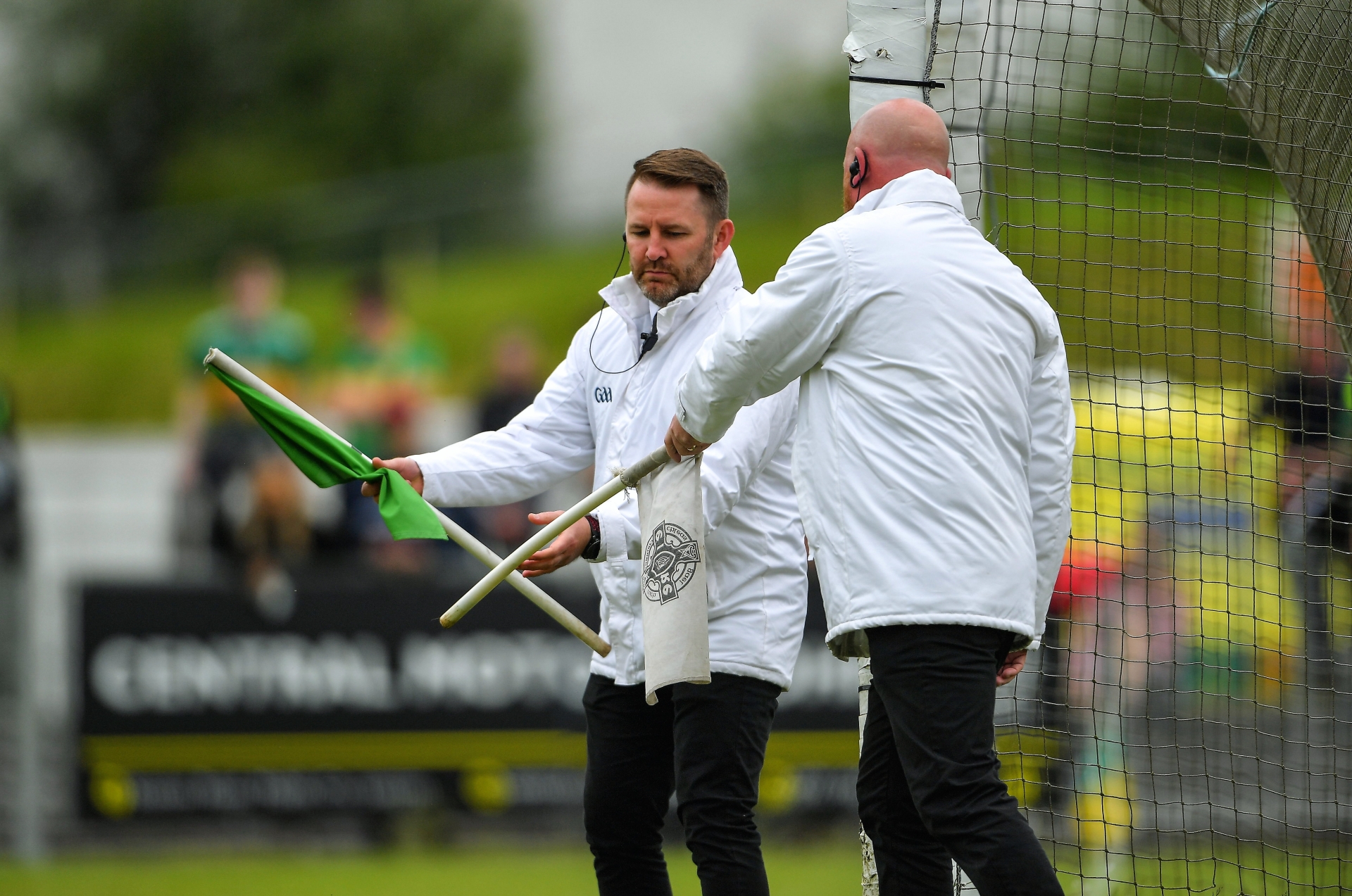 The umpires wave the flags to disallow Shane Moran's goal at the start of extra time Picture: Sportsfile

Maurice Deegan and his umpires are feeling a lot of heat right now but nobody complained when the Laois official clearly warned Conor Reynolds, already on a yellow card, that he was in The Last Chance saloon. Sligo would have loved to see the Annaduff man dismissed but Andy Moran reacted  quickly and a change was made.

That was a game changing decision as was one about Evan Sweeney's second half point that many Leitrim fans admit was wide but not a lot of fans are complaining about those are they?

I have a lot of sympathy for Deegan. I thought, and so did many of my colleagues in the press box, that Moran had strayed into the square early and the decision to disallow the goal was good. It was only when we saw the TV coverage that  we saw we were all wrong so imagine how Deegan and his umpires are  feeling right now.

Deegan made a decision based on what his umpires told him and you can't argue with that, he trusts his team so its natural he backed their call. Unfortunately for Leitrim, for Deegan and the umpires too, they got it wrong and equally unfortunately, there is nothing can be done about it now.

So, rather than wallow in bitterness and recrimination, however justified, I choose to  remember the day Leitrim fans returned in force to their team and the drama of a spectacular shootout. It was a cruel, cruel way to lose but let nobody tell me it wasn't the most intense, on the edge of your seats, experience you'll enjoy or endure in Pairc Sean this year!