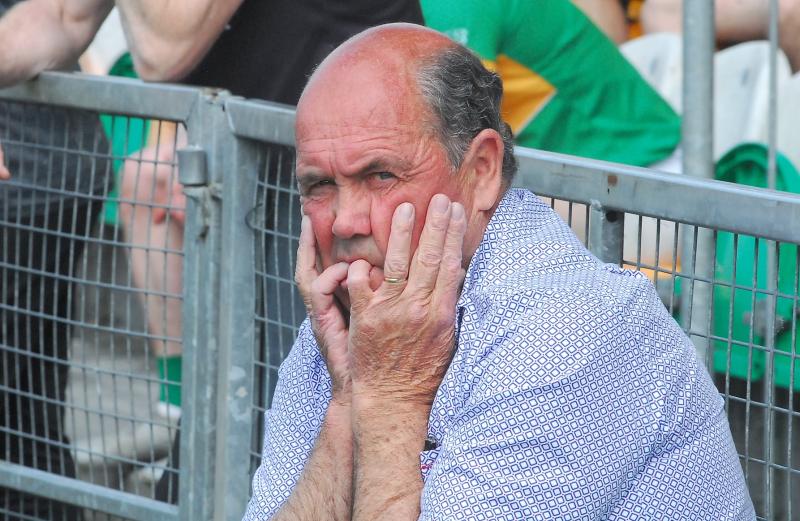 The tension shows on the face of an anxious Leitrim GAA County Board Chairman Enda Stenson in the closing stages of last Saturday's Tailteann Cup clash against Antrim Picture: Willie Donnellan

Two Leitrim matches last weekend and they couldn't have been more different. From the anticipation and expectation levels before both games to the reactions afterwards, the Green & Gold had a strange sort of a weekend that had me thinking about how quickly confidence can be built or smashed in a sporting environment!

I had thought of launching into a bitter polemic about the scheduling snafu that sees the men's and ladies county teams in action at the same time next Sunday but sixty miles apart - but that's a column with a long and difficult thought process and one that would probably be filled with quite a few expletives.

I'd be the first to say the LGFA have not  always been the best organised when it comes to fixtures, structures, etc, etc, but in this case, they were out with the fixtures first so you'd think Croke Park, in these days of integration and cooperation, would have taken the Ladies game into account.

Now, the GAA fixtures list did always state the Tailteann Cup quarter finals would be held over the weekend of June 4-5, but maybe a little more thought would have given us all a better solution.

Unfortunately, that means the Observer sports team and lots of dedicated supporters are going to miss a huge game and with the game taking place in Carrick, it will probably be the ladies who miss out. Hugh Donnelly's side are still in the group stages, they have another day out the following week against Wexford while Andy Moran's men are firmly in knockout mode.

But it doesn't sit well with me that we're forced to choose - I accept during the league, when time is tight, that compromises have to be made and while the men's team are undoubtedly the bigger attraction for fans -  a fact backed by our own figures on engagement with our website and social media - the fact is that the ladies team are, right now, the more accomplished outfit.

Back to back Connacht Intermediate titles, appearances in League finals and semi-finals in the last two years and, with victory next weekend, they'd be right back in the race to make the championship quarter-finals.

I had promised to myself at the start of this column that I wasn't going to wade into this debate because what struck me last weekend watching both our men's and ladies teams is how fickle sport truly is, how confidence can be overflowing one minute and evaporated the next.

If you had put a gun to my head on Saturday morning and asked me to predict the weekend's results, I'd have said the ladies would definitely win while I'd have hedged my bets about the men - that's not to say I thought they wouldn't win but I believed Antrim would offer a formidable and considerable threat - how wrong I was on all counts!

I'm absolutely not trying to take anything away from Leitrim's superb win last Saturday - Andy Moran's team did everything we could have wanted. They were aggressive, played with intent and defended excellently and all without key players like Donal Casey and Ryan O'Rourke.

It was a fierce statement of intent and so impressive was the first half display that I was prompted to remark to colleagues Martin McGowan and Darren Mulvey at halftime that the game was over, done, dusted, all wrapped up. In fairness, Martin looked at me as if  I was speaking Swahili but the evidence was there - plain to see -  in the first half.

Everything Leitrim were in that first half, Antrim weren't - as Leitrim broke up an Antrim attack in the first half and surged up the field to score, two Saffron players had their hands on their knees in the Leitrim half so I felt quite confident at the halftime break that Andy Moran's side were marching into the quarter finals.

Did Antrim have chances and kick some awful wides in the first half? Yes they did but having witnessed Antrim a little over 12 months ago in the League, they were a shadow of the team that beat Terry Hyland's side. Their confidence was shot and players who ripped Leitrim apart that day were anonymous last Saturday.

What about Antrim's second half surge that cut an 11 point gap back to four? Well, no more than many a famous Leitrim comeback from hopeless positions over the years, I never had any real sense of danger - Leitrim were creating chances but got sloppy in their execution, while running the bench robbed Leitrim of the cohesiveness that was stamped all over their first 45 minutes last Saturday.

Now, a word of caution - Sligo mightn't have set the world alight against London and went to extra time (Leitrim know all about that!) but the Yeatsmen were tested to the limit by the Exiles - Leitrim weren't really tested as Antrim players were miles off their men and the Green & Gold had the apparent freedom of Pairc Sean.

I'd give Leitrim a great chance of beating Sligo next Sunday but, in all honesty, I'd give Tony McEntee's team the same sort of a chance. They won't fear Leitrim - they've beaten us three times in a row now and they'll be just as motivated. The question now is who has the confidence but there are times when confidence can be a danger.

Arriving in Shane McGettigan Park last Sunday, I fully expected a relatively easy Leitrim win - Hugh Donnelly's side were in good form, Michelle Guckian & Leah Fox are deadly and defensively the team are solid. Wicklow were relegated in the League, didn't win a game in the championship and were far away from home.

Seeds of doubt crept in as I watched former Wicklow legend Leighton Glynn put his team through their paces warming up - the Garden county didn't look like a team  here to make up the numbers but Leitrim seemed equally well motivated. And despite an early Wicklow goal, the signs were good for Leitrim as they hemmed Wicklow in their own half and were charging forward in waves.

If there was one blight, it was that chances were being missed - points were taken when goals were there for the taking, goals passed up and you could see Wicklow growing in confidence, the flow of positivity and encouragement from their bench finding fertile ground as the game wore on.

As their confidence flowered, Leitrim's seemed to wilt - errors started to creep into the game with misplaced passes and  fraying tempers with players shouting different instructions to each other complicating matters. It was a problem which surfaced against Offaly in the league semi-final and it came back with a bang here.

Just as they did in the League semi-final, Leitrim almost rescued victory in a game where they played second fiddle. Wicklow mightn't have the record or same quality that Leitrim possess but they had a clearer idea of what they wanted to do and with that confidence growing, they grew and grew into the game.

All is not lost for the Ladies team - they have a tendency to struggle when they are expected to win and flourish when the odds are against them. The odds are against them next Sunday - they'll be away from home and without their usual support but that's the sort of situation they thrive in and they feel they owe Offaly after the League semi-final defeat.

Both Leitrim teams, men and women, face tough challenges next Sunday. That they have the capability of winning is not in doubt but it won't be easy either. All we can do is support them, be that in person or in spirit, and hope for a Leitrim double next Sunday!