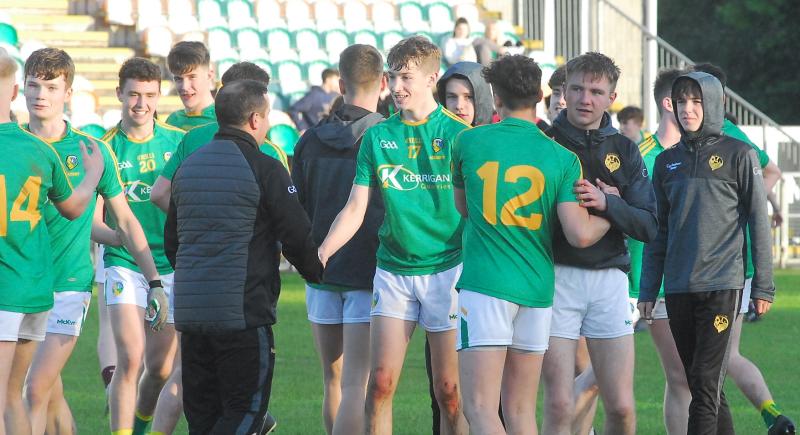 Music fans of a certain vintage will know the song “Hate to say I told you so”, a blistering, up tempo and raucous punk rock anthem that delivers an energy that was probably replicated by joyous fans leaving Avant Money Pairc Sean Mac Diarmada last Friday evening after a glorious and all too rare victory for Leitrim over Galway.

Whatever the energy brought about by the Minors first championship victory over the Tribesmen since 1998 and a first win since an Enda Lyons led Green & Gold won the 2014 Connacht Minor League with victory over Galway in Tuam, the energy coursing through this young Leitrim team is a joy to behold.

Some of you may think that “Hate to say I told you so” is linked to our report last week where we talked of signs of promise emerging despite a nine point loss for Adrian Dockery’s side in Markievicz Park, something I felt a little self conscious about when writing, wondering if everyone would think me mad or I was putting a bit too much pressure on young lads.

Truth is, you don’t have to have any special insight to recognise that there is something stirring with Adrian Dockery’s team. The signs were there last year, despite a heavy loss to Sligo, and indeed the year before when a Brendan Guckian led team really tested a vaunted Galway side.

The results mightn’t show it, and if we’re being hypercritical results in this year’s campaign haven’t reflected what Leitrim have delivered on the field of play, but there is no disguising the fact that Leitrim’s teams are becoming more competitive at underage level once more.

I’ll admit that being competitive at underage level is that little bit easier than it is at Senior - at underage, you can have a golden generation coming through every now and again and with only two years to pick from, it is a slight bit easier to make a breakthrough against the superpowers.

At Senior level, you’re handpicking supreme talents spread out over a 10 to 15 year span while strength in depth and sheer numbers bears down in oppressive fashion, a point illustrated by the recent Leitrim and Galway clash at Senior level.

Back in 2017, Ryan O’Rourke, Dean McGovern, Conor Dolan, Keith Beirne, Pearce Dolan, Jack Heslin and Mark Plunkett suffered one of those frustrating yet typically Leitrim defeats where they staged a stirring rally from an 18 point deficit before losing 4-10 to 2-12 to Galway.

Current Leitrim captain David Bruen couldn’t get into that team while James Mitchell, Niall McGovern and Keith Keegan from that team have all lined out for the County Senior team in the years since.

But here's the kicker - only four of that Galway team, who went on to defeat Kerry before losing to a Dublin side featuring Con O’Callaghan, Brian Howard and Eoin Murchan - started against Leitrim a few weeks ago in Pearse Stadium. Shockingly, the three players we all felt that were guaranteed superstars - Michael Daly, Sean Andy O’Ceallaigh and Peter Cooke - aren’t even in the Galway panel any more!

Galway may be able to cope with the loss of those supreme talents but here in Leitrim, we need every single player we can get and we need to give them every chance of developing and progressing to senior level.

And that’s where “Hate to say I told you so” comes in - the last two or three Leitrim Minor/U17 teams are the first generation of players to come through having played their entire underage career at 15 or 13-a-side level and it shows!

This current Minor team features a wide spread of clubs represented, not one or two super clubs supplying everyone, and there is absolutely no argument that these players are better developed and more skillful.

Is that down to getting rid of the 9 and 11-a-side formats beloved of so many clubs? There may be lots of factors at play here but, to be honest, I believe yes it has. Leitrim players are showing better spatial awareness and a better idea of how to manoeuvre and develop while playing at a higher level. Standards have risen and it shows.

I'll admit that there are some who believe the opposite with one poster on Hogan Stand in the aftermath of the Salthill defeat informing us that playing 9 & 11-a-side games develops extra fitness but the evidence says the opposite.

Small sided games are crucial to developing skills provided they are played on much smaller pitches, compressing space and time on the ball. Instead, we had games played on virtually full sized pitches where one or two players, that bit more physically mature than their opponents, ran the show.

Truth is it actually hindered those players for once their opponents caught up with them and suddenly, there was 30 players on the pitch, the skills needed to execute under pressure just weren't there.

One unintended but costly consequence is that clubs haemorrhaged players at juvenile level because, instead of developing the talents of 17 to 20 players, they concentrated on the 10 to 11 players needed to win in smaller team games, leaving many wondering where all their underage players have gone as they struggle to field teams at adult level.

Honestly, it is simply a numbers game - the more games you play, the more players you develop and the higher the standard they play at, the better chance of success you have at club and county level.

Work remains to be done - kids need to be playing more games, they need 15-20 games and not the 10 or 12 they get right now. Players do get extra games moving up age groups but it might be better if players had more games at their own age rather than getting blasted out of it by older opponents.

Personally, I’d love to see a Leitrim team entered in the Connacht Schools “A” grade because it exposes players to a higher level of training, of preparation and competition and that can only be good for everyone.

I'll admit, one swallow doesn’t make a summer but green shoots have emerged over the last three years. It remains a work in progress but last Friday’s result was proof of concept so congrats to those who led the reforms of the underage structures in Leitrim - they weren’t, and still aren’t, popular - the resistance to the U13 Cross Border League is proof of that, but the results are starting to be seen on the field.

Bashing the Games Development set-up in this county is almost an article of faith but perhaps clubs should be listening to them a little bit more, engaging with them and then Leitrim football, club & county, will be a lot better off!