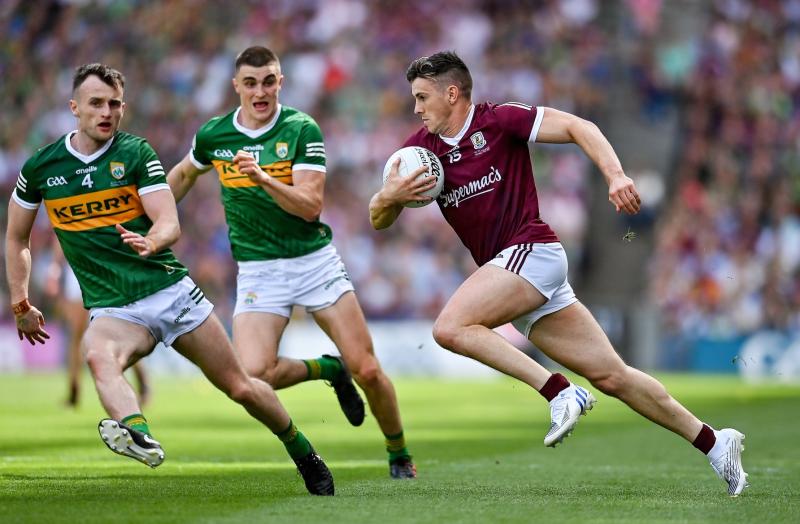 What a difference a week makes. Just ten short days ago, Shane Walsh was the toast of the GAA world after he wowed the entire country with his display for Galway in their All-Ireland Final loss to Kerry. The last few days, to some, he is the symbol of a worrying decay in the concept of loyalty to your club! Just how  the hell has it all come to this!

The 29-year-old Galway star confirmed on Monday that he has told his club, Kilkerrin Clonberne, that he wants to throw his lot in with Dublin giants and All-Ireland Senior club finalists Kilmacud Crokes and just in time for the defence of their Dublin and Leinster club titles.

So far so good, what’s that got to do with the price of butter, says you? Well, his club have reacted with, to put it mildly, outright fury to the news, blasting all and sundry with their club chairman quoted extensively in the Irish Independent  as he pulled out all the big guns in an effort to ensure the Galway star stays put.

Ian Hynes said Kilkerrin Clonberne had tried everything to get Walsh to change his mind after he asked for a transfer. “We are going to fight this all the way,” he told the Irish Independent before turning to two of the most recognisable tropes in the GAA vernacular.

First - will somebody think of the children: “He is such an inspirational figure for all the young players coming through. Everybody here is in shock, particularly the juvenile players because he was such to hero to them.”

Second - the auld David & Goliath story, beloved of the entire GAA world as Hynes put the blame firmly as the feet of the big bad bogeymen up in Dublin: “We believe it is wrong that a huge club like Kilmacud Crokes are allowed to do this. We are trying to keep the GAA alive in rural Ireland. We have 70 adult members and there are 600 houses in the parish” before finishing with a killer blow “From a club perspective it is shocking, but there are wider implications for the GAA as well. The Dublin club scene is a different world to what's happening in rural Ireland.”

As a campaign to undermine a player seeking a transfer, Hynes’ comments were masterful - what about the children, Shane is wonderful and our young players look up to him and blast those Dubs, they’ll do the same to the rest of the country if they get a chance!

Neither Walsh nor Kilmacud Crokes have done anything wrong here according to GAA rules  and I'm not sure if Kilkerrin Clonberne have any grounds for denying their star man a transfer other than they don't like it and I wonder if they've  well and truly burned their boats with their star man by the way they've reacted to the situation.

Walsh is now caught in the midst of a storm. Studying to become a PE teacher in Portobello College in Dublin, he has an opportunity to link up with the second best club team in the country and save himself the hassle of long trips down the country for training and matches at a time in his life when those demands are becoming harder and harder to justify - many of us would make the exact same choice so why the hullabaloo?

Truth be told, I’m  conflicted about this one - clubs, particularly those on the western seaboard, need each and every one of their players to survive -  they’ve developed them, guided them and brought them through to a point where someone like Walsh is acknowledged as one of the game’s special talents and all that doesn’t happen without his club.

But, and I find this  equally compelling, Walsh is a grown adult, able to make his own decisions. He is 29 and played all his life for Kilkerrin Clonberne so what exactly does he owe his club? Is his career and life away from football secondary to the place where you first played football. Does the old slogan “You don't choose your club, you inherit it” really mean Walsh is stuck with Kilkerrin Clonberne from cradle to the grave?

The nasty part of me wonders what happens if Walsh’s transfer is rejected? Does he continue playing with Kilkerrin Clonberne as if nothing has happened? Does he refuse to line out for his club? Most counties have rules that you must line out in the previous year’s championship to be picked for a county squad so could Walsh do a Seanie Johnston on it, line out for his club but go off after five or ten minutes, claiming he is injured?

Think that’s far fetched? Not a bit of it - I’ve twice witnessed in Leitrim  when players in dispute, for very different reasons,  with their club and  county lined out but virtually stood still and did nothing. They were on the field but they might well have not been for all the good they did - Kilkerrin Clonberne may believe they are justified in their stance but getting their way  might have some unintended consequences!

As far as I know, there’s absolutely no chance of Walsh swapping County colours so as much as part of me understands the angst in Kilkerrin Clonberne, another part of me wonders what is the big deal? Walsh is far from the first and won’t be the last to switch clubs so this is where it gets interesting to me.

Walsh’s destination seems to be the problem for some with Irish News journalist Cahir O’Kane, one of the most interesting journos to read, tweeting “Kilmacud Crokes have 4,800 members - seven adult football teams and five in hurling. All-Ireland club finalists. U19 & U17 footballers top of Div 1. U19 hurlers same. Modern Ireland demands a GAA transfer system - but one that allows Shane Walsh to go to Kilmacud isn't right.”

So if Walsh was to transfer to my old club, Erins Isle - a former giant fallen on hard times - would that be ok? Is it Kilmacud Crokes in particular or would joining Ballymun Kickhams or Judes or St Olaf's be ok? Where is the line here? O’Kane elaborated further: “Just to be clear, Shane Walsh has and should have the same right to transfer as any other GAA player. Galway-Dublin is some spin. But Kilmacud and other superclubs like them shouldn't be allowed to act like they're Man City.”

So it is the destination that’s the problem, not the decision to leave his hometown? Strange that.

What I find illuminating is that in an era of much improved transportation links, more and more players are switching clubs. But when the demands on the time of club players is approaching that of County squads, maybe it is not all that surprising after all.

Melvin Gaels’ Darragh Rooney joined St Judes at the start of the year as did Alan McLoughlin, who is back in the Mohill ranks now, while Emlyn Mulligan, formerly of Melvin Gaels, is now with St Mary’s in Sligo having spent a few years with St Brigid's in Dublin.

It is not a new trend - the legendary Packie McGarty barely played any adult football here in Leitrim, spending most of his career with Round Towers in Clondalkin or Tara in London but it doesn’t make him any less beloved in his native Mohill.

Former Tipperary star and manager John Owens played a season with Leitrim and Allen Gaels, helping the Drumshanbo men win the Fenagh Cup in 1991 and it didn’t make any real splash but Colin McGlynn’s decision to swap the red & green of Kiltubrid for the sky blue of the Drumshanbo men wasn’t a popular move.

Declan Darcy swamped Leitrim for his native Dublin and a year later, departed Aughawillan. Boy did they miss him but he left with the good wishes of the Willies and it is no surprise to see Darcy down cheering on Aughawillan in County Finals in the years that followed. If there was anyone put out by the decision, it was some of Darcy’s former county teammates  as those of us  who remember a fractious National League game in Parnell Park will testify.

Leaving your club is emotional, it is tough and it can be nasty and difficult and bitter and, as I've pointed out, it can provoke very different reactions ranging from rage to grudging acceptance. But the age of clubs believing that  players are virtually their property is long gone. It is a two way street and clubs haven’t exactly got the best record in player welfare down through the years.

Still, it will be interesting to see how this one plays out for Walsh, for Kilkerrin Clonberne and everyone else in between!