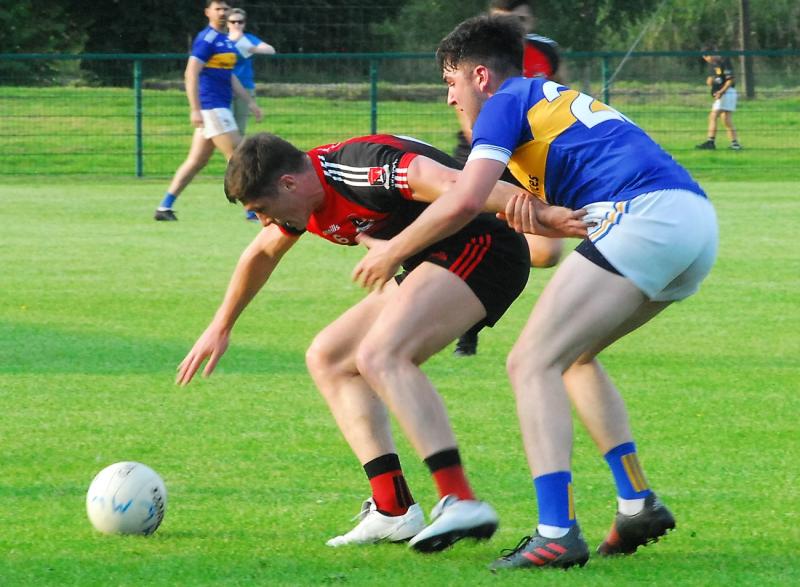 How could you not be enthused by the opening weekend of the Connacht Gold Leitrim Senior Championship - superb weather, competitive (enough) contests and a bit of mystery and excitement about who exactly you might be facing all added to what was a thrilling opening round of the championship.

The weather had a lot to do with the feelgood factor - impossible not to embrace positivity when the sun is splitting the stones and far nicer to stand a watch a game wearing a hat and sunglasses and maybe the odd bit of suntan lotion than shivering in the cold and wet.

The  little precautions helped - standing in the shade and drinking cold liquids all helped because the sun was that oppressive on Friday, that the old phrase “only mad dogs and Englishman go out in the midday sun” comes to mind  - well it wasn’t midday in Pairc Naomh Mhuire but the glare of that blazing orb in the sky felt like somehow was taking hammers to your head.

Strangely, in these days of sports science and marginal gains, I was more than surprised to see teams conduct their usual high energy warm-ups in conditions that most of us never experience - the coaching anorak that I am has always searched for portents in what teams do in their warm-ups, wondering if they are targeting a particular area to exploit when the game actually starts.

But I was incredulous to see players burst themselves with complicated drills for nigh on 30 minutes before the first whistle was ever blown - sure you need to do a few activation drills, loosen out limbs after car journeys and ease whatever aching limbs there might be by running a couple of passing moves but considering that just standing on a pitch meant you were  already sweating buckets, the extent of those  warm-ups left me somewhat bewildered.

While both teams in Fenagh on Saturday performed pretty extensive and energetic warm-ups, there was a huge contrast in Pairc Naomh Mhuire on Friday - St Mary’s executed a vigorous and complicated series of drills under the blazing sun that left me wondering about their sanity while Mohill opted for a much more sedate affair, leisurely drills, very short bursts and little charging around at full speed - and all done in the shade of the overlooking McGovern stand from Pairc Sean Mac Diarmada.

Did that win Mohill the game? Probably not but it certainly helped and I’ve got to say I was impressed by the way Eamonn O’Hara & Mickey Quinn adapted the needs of their warm-up to the situation. It was, to use another catch phrase, “blue sky thinking” as Mohill adapted to the circumstances and undoubtedly prospered.

The other big revelation from the two games I was at is not news at all - if you have a supreme attacking talent, you’re chances of winning are exponentially better than the opposition who don’t. Some teams do their scoring by committee, the sum of their parts more than their individual components - champions Ballinamore Sean O’Heslins had eight different scorers and all without Tom Prior on the field, they’ll be hard to contain with firepower like that.

But most teams rely on one or two focal points to lead the way and in Keith Beirne and Ryan O’Rourke, fans witnessed two supreme practitioners of the art of scoring. That they have ample and quite talented support is not in question but these two stood head and shoulders above all last weekend.

For those who read my report of Mohill’s surprisingly facile win over St Mary’s, that might seem contradictory for I reckoned Keith Beirne had a relatively quiet outing. He  ended up with nine points, six from frees,  but was a big player in the game’s key moments,  notably a sublime pass to set up Ronan Gordon for the game’s only goal.

But that’s the sort of standards Beirne is now judged by - his string of outstanding displays means he is measured by a different yardstick. Apart from his pass for Mohill’s goal, Beirne whacked over three wonder points from play but he seemed more than content to pull and drag St Mary’s defence all over the field, leaving gaping holes for his teammates to exploit - that’s an under appreciated part of the game and just as valuable when the opposition is fixated on one player.

Ryan O’Rourke took a very different tack on Saturday - the flying Fenagh man was literally at the heart everything his team did well against Aughawillan. So many times what he did looked so fantastically simple that it hid the genius of O’Rourke’s movement, his blinding pace, perceptive passing and deadly accuracy.

The Fenagh man has always been a flyer (no surprise to learn he was a highly rated prospect over 800m in athletics) but his acrobatic catches, soaring into the air to claw the ball out of the air, seemingly frozen high above his opponents, were truly inspirational.

O’Rourke was very much the difference between Fenagh and Aughawillan - again that seems simplistic but given the chances the Willies created and missed, they’d have won this game had Ryan been wearing blue rather than red, it is as simple as that.

The scoring exploits weren’t confined to O’Rourke and Beirne - Martin Feeney from Dromahair, Leitrim Gaels Stephen Goldrick and Glencar Manorhamilton’s Evan Sweeney all raised their hands high as ones to watch over the coming weeks while Conor Beirne scored an extraordinary 2-10 for Eslin against Glenfarne Kiltyclogher last weekend in the Junior championship.

Forwards were very much on top as defences seemed to struggle in the sun. Maybe that’s down to the fact that preventing scores is easier when the ground isn’t quite so firm, the wind is blowing or rain is pouring down but perhaps the era of suffocating defences is finally being eroded by clever attacking strategies? Or maybe it is just that we all tend to eulogise attackers more than defenders, worship the creators rather than the destructors?

Its a trap lots of us fall into - how many times do the man of the match awards go to the  forward rather than the defiant goalkeeper or doughty defenders whose contributions are just as important to the overall victory as the high profile scoring forward?

I’m guilty of that myself, it is an easy narrative but we only have to look at the impact of  incidents like Brendan Flynn’s penalty save in Boggaun to know that the big moments are not always when the ball goes over or under the bar.

I'm sure that as the Intermediate teams spring into action with  the already started Senior & Junior competitions and the Ladies club championship hits full speed next weekend, we'll eulogise the shooting stars in both mens and ladies more and more - but its  hard not to when you witness Ryan & Keith in full flow!