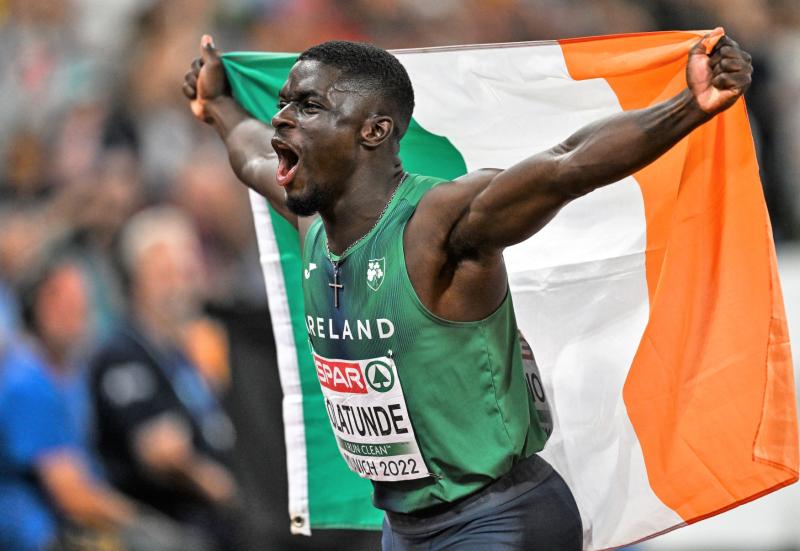 Sometimes you're better off not clicking on social media posts. For all the benefits of instant access to news and different viewpoints you are exposed to, sometimes you feel that Twitter is a cesspit of negativity and bile.

Certainly that was the way I felt after I stupidly clicked on a tweet over the weekend where one particular user, with their name 'as Gaeilge' and plenty of Irish flags, acidly asked Ireland's fastest ever man Israel Olatunde why he wasn't proud to call himself a Nigerian as the Dundalk man was clearly not of Irish genetic extraction.

It is a curious, if blinkered, argument that may be scientifically correct but, emotionally, is all wrong and coupled with the whole hashtag “Ireland is full” campaign that's been trending, I'm left wondering if the famed Irish common sense and decency is a myth that deserves to be placed alongside the legends of Fionn Mac Cumhaill and Cú Chulainn!

We Irish love to roll our eyes at the antics of the MAGA crowd  in the US or the “Johnny Foreigner Brexit means Brexit” brigade across the Irish sea but  if there is one thing we can be certain off, it is that people all over the world can be equally bigoted and intolerant no matter from where they hail.

I'm a great believer that sports and politics are like oil and water - they don't and shouldn't mix. I'm enough of a realist to know that they do but the dreamer in me wishes they weren't. So I'm not going to wade into a debate about immigration, emigration or any of that but the performances of Olatunde and Rhasidat Adeleke last week got me thinking about identity and how our sense of place & home shapes our core identity.

Identity is a curious beast - I'm living down here in Leitrim much longer than I ever spent in my native Dublin but to my dying day, I'll be a Dub and a Northsider at that! Finglas and proud of it as they say but that's no different to the legions of Leitrim exiles, and we call them exiles as if they were somehow banished, in the capital!

Identity is what makes those living and working all over the country pack their bags every weekend to head home to Leitrim to represent their club, their people and their county. It's what leads us all to proclaim “Irish by the grace of God” and boy do we mean it.

You'd have thought that a nation that exported so many of our brightest and best for the guts of 150 years up until the explosion of the Celtic Tiger would have had a greater appreciation of those who choose to make Ireland home.

“Who put the ball in the English net” was the chant for many years but Ray Houghton's brogue is not Irish tinged but rather carries the distinct hues of his Scottish upbringing and you only have to listen to Today FM's The Last Word to realise that Irish internationals Mark Lawrenson and Tony Cascarino weren't raised in Ballinaglera or Ballydehob!

Try telling Mick McCarthy, with his thick Barnsley accent, or Kevin Kilbane with his strong loyalty to Mayo that they aren't Irish and I know what answer you get. Sanita Puspure rediscovered rowing after moving from her native Latvia after moving to Ireland with her husband for work and I'd imagine there is no greater honour for her than in wearing the Irish vest.

It is not as if the new generation of Irish sporting heroes are being bought, and I mean literally being bought, by countries seeking to burnish their international standing through sporting success in the way Turkey, Bahrain, Qatar and so many have done so already.

We beam with pride when some Aussie or Yank talks of their Irish connections and we knowingly smile when seeing Jack Grealish or Declan Rice in the English jersey but some seem reluctant to buy into the idea that Olatunde and Adeleke have dual heritages while expressing their immense pride at representing Ireland on the international sporting stage.

The exploits of young Olatunde and the even younger Rhasidat Adeleke is no surprise to the small, tightly knit Irish athletics community - many years ago I was lucky enough to witness Adeleke demolish an Irish Indoor U16 indoor 200m  record in Athlone with a fluency and grace that marked her as a special talent.

Adeleke's heritage is different to that of Ciara Mageean from the Ards peninsula or that of Mark English from the hills of Donegal but there's no doubting she is from Tallaght and as Irish as any of those wearing Dublin Sky blue or Leitrim Green & Gold.

As much as the exploits of Israel and Rhasidat thrilled me, I've got to admit that seeing Efrem Gidey and Hiko Tonosa Haso mixing it with Europe's best over 10,000m in Munich on Sunday night filled me with pride. Both runners endured horrors in leaving Ethiopia and Eritrea, in the way   Irish emigrants endured the coffin ships so many years ago, but their homes are here in Ireland now and Ireland, as a country, is the better for it.

We're no different here in Leitrim - many years ago, the most exotic figure in Leitrim sport was Declan Darcy, Dublin born but Leitrim proud, leading the Green & Gold to glory in 1994 with another Dub in Jason Ward on board in that miraculous year. Back then, getting the odd Dub to throw their lot in with Leitrim was the height of it but times are a-changing.

Arandelovic isn't a name you find too often round Ballinamore but  Anton Arandelovic was one of the first “new Leitrims” to line out for Ballinamore Sean O'Heslins and Leitrim back in the noughties but Anton was an outlier at the time and times have definitely changed as the years have passed and nobody encompasses that better than Zak Moradi! 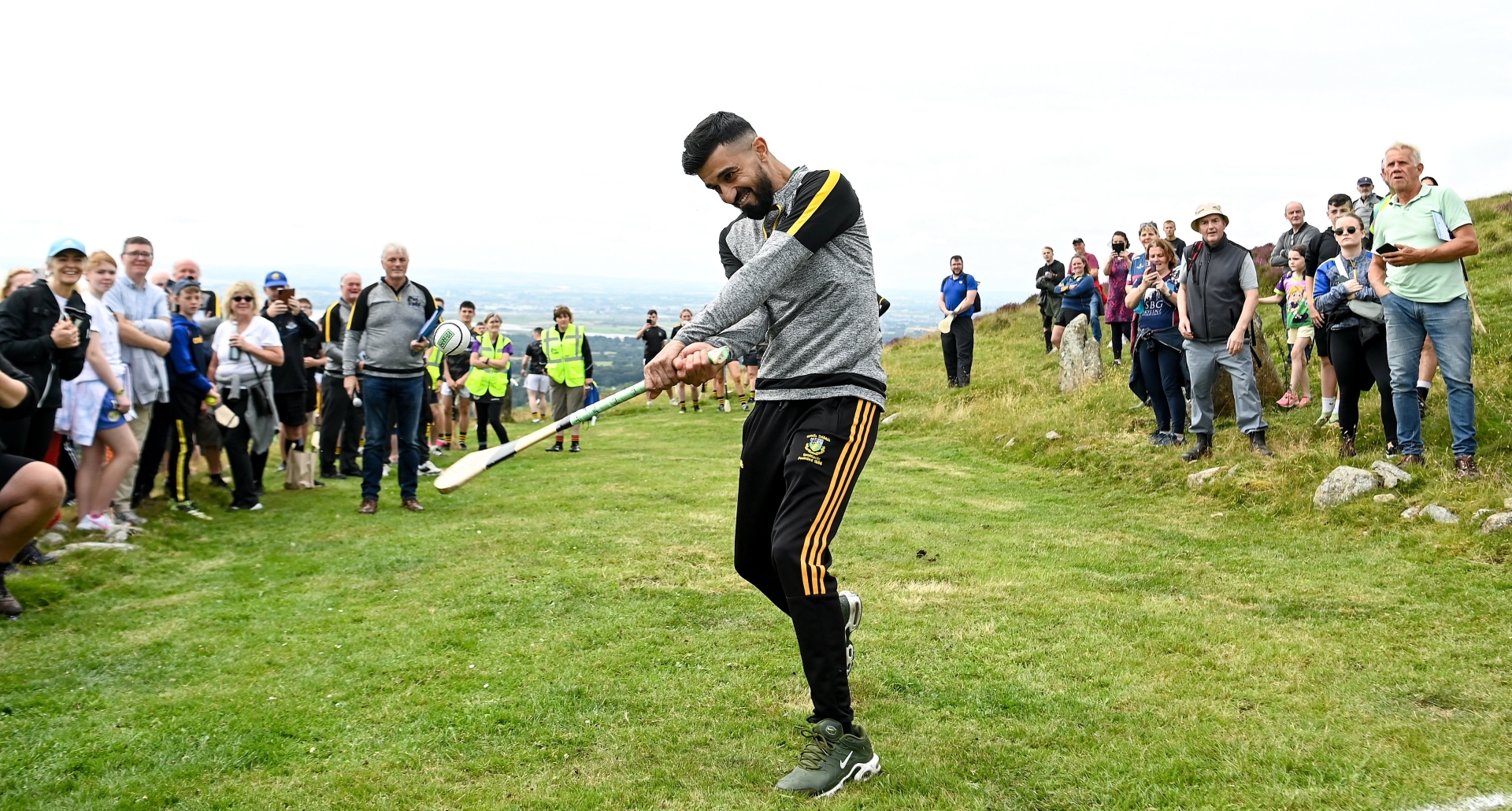 Zak Moradi wasn't born in Leitrim and he's picked up a good Dublin twang over the years but there aren't many as proud of his Leitrim roots as the Kurdish- Irish hurler. Zak mightn't be able to line out with the county hurlers these days due to work commitments but he's gone out of his way to securing much needed sponsorship for the county hurlers - that makes him more of a Leitrim man in my book than many born and bred here.

Radek Oberwan has already represented Leitrim at underage level and I know he has caught the eye of Andy Moran while his younger brother Aric is another burgeoning star for Allen Gaels. I'm sure their Polish heritage is just as important to them as the Irish ancestry is to the legions of young kids in New York and London who follow their parents to Ruislip and Gaelic Park but these youngsters represent the new Leitrim and the new Ireland.

If I'm being honest, Irish sport hasn't done enough to welcome the new Irish - there is a vast population of eastern European extraction in this country but it is not showing up on our playing fields and running tracks just yet. It's getting better - the outreach to the thousands of Ukrainians displaced in this country from each and every sporting organisation is to be welcomed but more needs to be done for the other communities that are sprinkled all over this fair island of ours.

They may have very different names but the reality is that the new Irish are just  as Irish as the Murphys, O'Briens and Connollys. And if we win the odd medal or championship, all the better says!