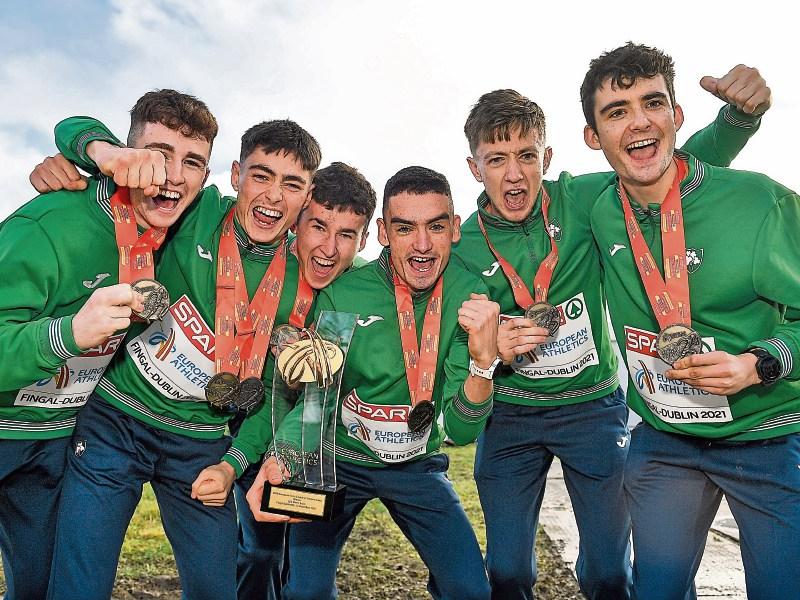 Decided that I'd give myself an early Christmas present and headed up to Abbottstown and Sports Campus Ireland last Sunday for what turned out to be a truly inspiring Spar European Athletics Cross country championships, a day that inspires even someone as long in the tooth as myself!

As much as I love gaelic football and would glad debate games and controversies for hours and as much as I revere Everton & Barcelona or marvel at the feats of Steph Curry, Michael Jordan & LeBron James or watch Aussie Rules or cycling or american football or a myriad of different sports, none of them hold a candle to my obsession with athletics!

I'm the nut who can tell you who the second man to run a sub 4 minute mile was (for the record, it was John Landy of Australia on a tour of Finland just a few weeks after Roger Bannister's feat) or debate just why Paul Tergat is the world's greatest ever cross-country runner - in my opinion, it is heresy to suggest Ethiopia's Haile Gebrselassie or Kenenisa Bekele hold a candle to the Kenyan legend!

Athletics, or track & field as the Yanks call it, is my sport and cross-country the one strand above all others that gets me in the gut; the discipline that drove me to distraction and still manages to inspire the greatest feats of endurance and courage you could hope to see in a sporting arena.

Seems like I'm not the only one suffering from this peculiar affliction considering the amount of Leitrim people I bumped into up in Abbotstown. Young Scott Williams from Manorhamilton was queuing up for coffee behind me, the North Leitrim AC's youngster excited for the big event. Then I bumped into the Ahern family near the finish area, David, Niall, Brian and Mark all running in the Connacht cross-country in the recent weeks in the colours of Ballinamore AC.

Kiltubrid's Fionn & Iarlaith O'Brien were there too, thrilled to see the extraordinary Jakob Ingebrigtsen in the flesh, while two Leitrim exiles in Meath - Ballinaglera's Michael Cornyn and Drumsna's Padraig Farrell - were just as excited as any young fan as we dissected the day's action.

On the official side, Patricia Griffin was busy in the finish area, helping exhausted runners get to their feet while Gerard O'Donnell was run off his feet and didn't even get the chance to meet up with his mother Mary, another spectator, so busy was he working all week with Athletics Ireland. And that's just some of the Leitrim crew I met at an event that drew the athletics community in droves from every nook and cranny of the island and much further afield!

Now, honesty compels me to admit that cross-country running truly is a niche endeavour. Maybe that's because far too many of us experience distance running as some form of tortuous punishment - mess up a drill in your chosen sport, don't pay attention to the coach or act the maggot, well then its laps and laps and laps for you!

But for me, there is nothing like it! You're probably thinking Connolly has lost the plot again but consider what it takes just to compete in cross-country!

You have to mix the speed of a sprinter with the endurance of marathon runner, sprinkle in the sheer stubbornness to keep going when the lactic acid makes it feels as if your legs are on fire and do it all over a terrain that literally goes from muck to hills to rock solid grass all in the space of a 1,500m lap and then you might start to understand just how much the sport demands of its participants.

A cross-country start is like nothing you've ever experienced - elbows flying, spikes scrapping skin off shins or puncturing your foot, shoves, whacks and belts - and that's just from your own teammates as you charge off at full tilt for 200, 300, 400 metres, all with the knowledge that you could have up to six miles (yes six miles!) to go once what seems like a frantic horde of buffalo slows down!

When it comes to sporting toughness, cross-country is right up there. Seeing, first hand, highly trained, fiercely ambitious and hugely committed athletes, some of the best their countries have ever produced, literally running themselves into the ground - and I mean falling to the ground, picking themselves up and staggering to the finish - brings home just how fine the line these athletes tread in pursuit of glory!

Those watching on TV might not have seen that, depending on where RTE was on a break or doing interviews, but every race had at least one or two of Europe's best athletes crawling across the finish line, exhausted beyond measure

Fionnuala McCormack, who finished a frankly stupendous ninth in the Senior Women's race on Sunday just a week after running the second fastest time by an Irish woman for the marathon, is your prototypical cross-country runner - all skin and bones who looks like a good wind might blow them over but possessed of an endurance and strength that few mortals possess.

Cross-country humbles even the best of athletes - the last time these championships were in Dublin in 2009, a certain Mo Farah collapsed in the final stages of the Senior men's race as he pursued victory - cross-country has that peculiar ability to turn your dreams to dust in a couple of strides.

Just ask Germany's Konstanze Klosterhalfen how it feels - one of Nike's top distance stars and ensconced in an elite training group where Irish legend Sonia O'Sullivan is part of the coaching team, KoKo, as she is known, was battling it out for the gold medal with about 2km to go in the 8km race when the wheels came off. To rub salt in the wound, KoKo didn't even finish as the top German let alone medal as her compatriot Alina Reh charged by for bronze.

Ireland's runners experienced both sides of that coin on Sunday and nobody more than Darragh McElhinney - the West Cork athlete went ball-headed for gold in the U23 race only to find Britain's Charlie Hicks that little bit better. But McElhinney got revenge on the US based Brit when Ireland, with Sligo's Killian Kilreehill in sixth, took the gold by just three points ahead of hot favourites Britain. 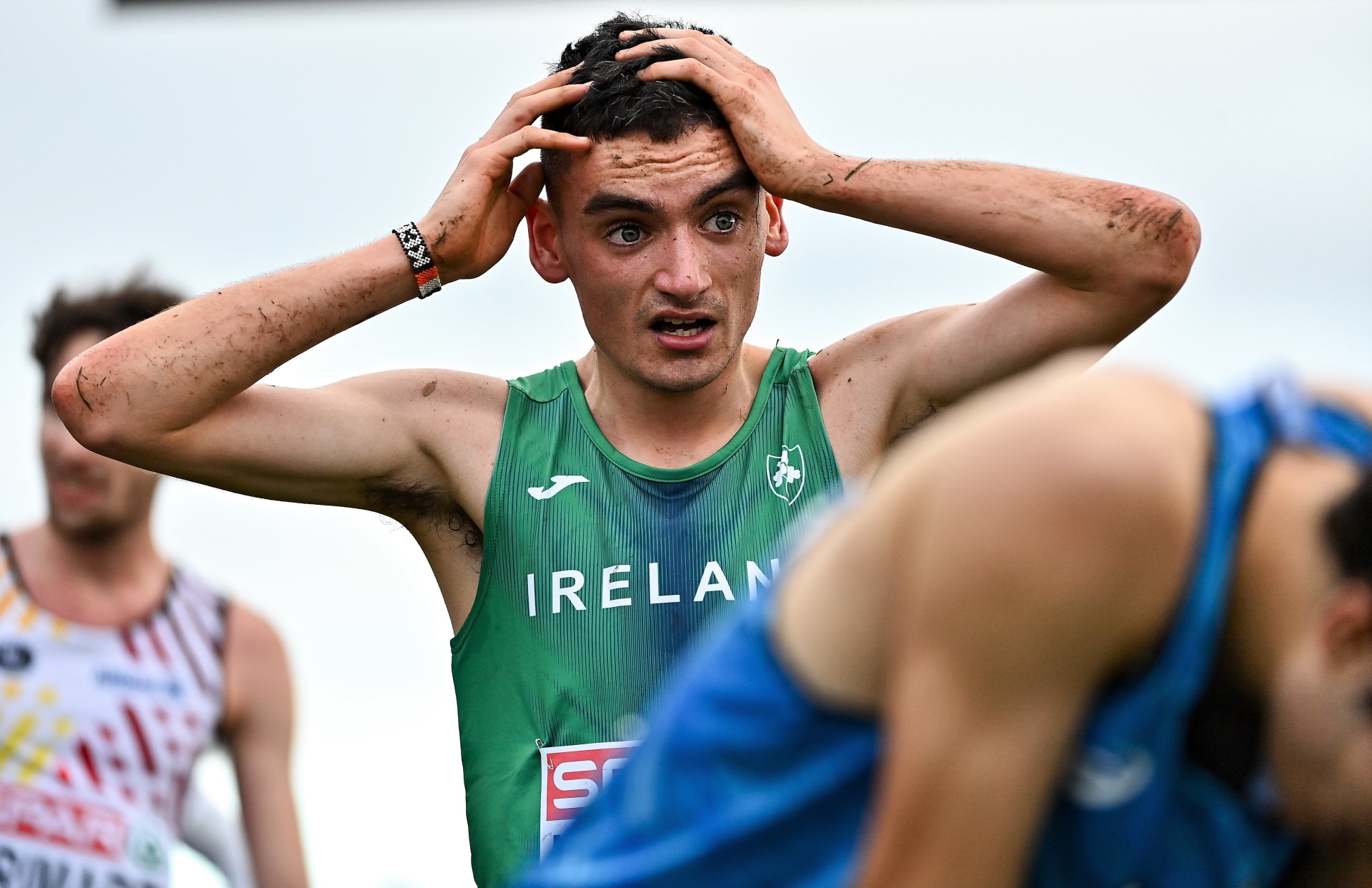 Moy Valley's Killian Kilrehill pictured with his heads in his hands after the Men's U23 race in Dublin Picture: Sportsfile

That U23 team probably did a better job of controlling their emotions than their U20 counterparts who claimed a superb silver medal but must be kicking themselves as they went out hard and lost out on the gold medal by a single point to, yes, you've guessed it, Great Britain.

Ireland's Senior Women and Mixed relay teams had the pride and agony of finishing fourth in their events - you're never quite sure what you might have done different to get a medal. The mixed relay team lost out by just less than a second after almost 6Km of hard racing. The fact that Ireland led for over half the race and were in the medal positions right up to the final 300m only makes it harder to take.

Parochialism aside, the Euro Cross was just one of those days where you were privileged just to be there - enormous crowds cheering on every race, fantastic contests going right to the wire and some truly exceptional athletes.

Jakob Ingebrigtsen was the star attraction but not for one second of his 10,000m journey did you feel he was going to lose, class oozed with every step he took. Norway actually had a double with Karoline Bjerkeli Grovdal finally taking centre stage by winning the Senior women's race after four bronzes and one silver in the last five editions of the race, adding the Senior title to the Junior crown she won all the way back in 2009.

For the running nerd, Sunday's event was nirvana but if there was one tiny disappointment, it is that the achievements of Ireland's athletes got so little attention. That might seem strange given six hours of live coverage on RTE but barely a couple of hours later, the feats of Ireland's U23 & U20 teams in winning medals in a European Championships hosted in Ireland were relegated behind Formula 1 and rugby on the Six-One News - not too many Irish drivers in Abu Dhabi, were there?

But us athletics anoraks are used to that by now, be it RTE or the national papers ignoring Ireland's heroes for their front covers, and it won't change just one little bit how much we enjoyed it all. I know I wasn't alone in sitting down when I eventually got home on Sunday evening and watching it all over again on the Sky Box!

Fair play to Athletics Ireland and their army of volunteers who worked so hard to ensure the whole event was such a smashing success. Here's hoping it won't be another ten years before the Euro Cross returns to these shores to give this cross-country junkie another much needed fix!