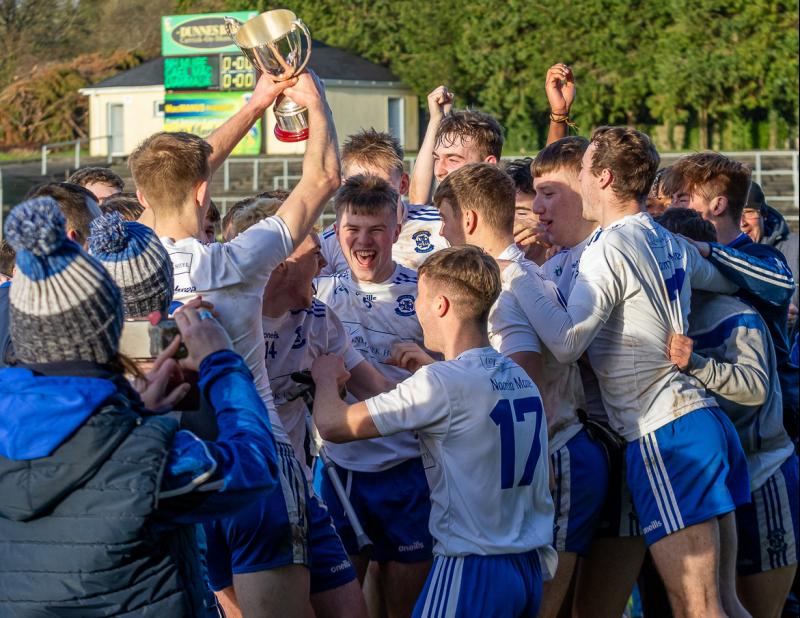 We can debate structures, funding, coaching and referees all we want but anyone with even a passing interest in the long term health of Leitrim GAA needs to pay good attention to Declan Bohan's timely warning about the demographic challenges that are coming down the line right now for clubs in this county.

Declan's comments, in a superb Secretary's report to next Monday's Leitrim GAA County Board Convention, arose when discussing the thorny subject of championship grading and player eligibility, a subject we touched upon a few weeks ago in this very column, and one that absolutely needs urgent attention.

But the revelation that in 2020, 70% of boys attending primary school in Leitrim were in the catchment areas of just nine clubs is so staggering and has such long term implications that we in the Observer have plonked it on our front page this week - it really is that serious.

Forget about the GAA for just one minute - those statistics have huge implications for the long term viability of rural communities all over Leitrim, be it schools or services. In purely sporting terms, clubs will struggle to field a team, never minds teams, at adult level in the years to come when those figures translate into players on the playing fields.

The signs have been as plain as the nose on your face for those who care to look - kudos to St Mary's Kiltoghert for getting their house in order but their population base and the superb work they've done with their academy is only starting to be seen. Wining U15 Division 1 & 2 titles, the U20 title and reaching both U13 Division 1 & 2 Finals and the Minor Final this year reveals a club with the potential to become a Crossmaglen or Corofin at Senior level in the years ahead.

Fair play to them says you - they've done the work and are reaping the rewards and that's 100% right. But when you consider their opponents in most of those finals came from an equally small pool - Leitrim Gaels, Allen Gaels & Glencar Manorhamilton - you can see the challenges that lie ahead.

Nothing wrong with that, clubs should make the most of whatever advantages they have, be it a golden generation that comes along once in a lifetime or a big population base but the demographic changes in Leitrim mean it is likely that honours are going to be the preserve of small coterie of clubs

Not for one minute am I criticising St Mary's - far from it, they have to be admired for their efforts but you can't escape the fact that population has always been a huge driver in success in sport.

The most successful club at Senior championship level in Leitrim, Ballinamore Sean O'Heslins, were forced a few years ago to join forces with Kiltubrid to ensure their young footballers had competitive football. It wasn't a decision the club took with any great enthusiasm but it had to be done, for the long term needs of their young players.

Amalgamations are far more common and even town teams like Carrigallen, Allen Gaels and Mohill have linked up with their neighbours, normally bitter foes, at underage level. But needs must and those amalgamations could soon spread to the adult ranks.

Our own Willie Donnellan visits primary schools all around the county for our First Day in School supplement every year and each and every year, Willie tells us of massive numbers in schools concentrated around the national roads corridors - the N4, N15 & N16 - but dwindling numbers in dozens of smaller areas.

Carrick-on-Shannon, Kinlough, Tullaghan, Dromahair, Dromod, Drumsna, Leitrim Village and Dromahair have all seen massive population rises over the last 20 years but it is only really beginning to impact on juvenile football over the past three or four years and is just waiting to hit the adult ranks.

That's why the motion to change the player eligibility for second and third teams is so urgent. If smaller clubs, fighting off just 30% of boys attending primary school right now, are to have any chance to compete against the other nine at any level, we have to act and act now and start looking for solutions that will make a difference.

Tough lesson for Manor Ladies but a valuable one

Before a ball was kicked in last Sunday's Connacht LGFA Senior Club Final, we knew that Glencar Manorhamilton were up against it. The 2020 Intermediate Provincial champions knew they were stepping up a level but even they were shocked by the scale of Kilkerrin Clonberne's victory.

It didn't look that way at halftime! Trailing by just three points, Glencar Manor had missed chances that could, quite easily, put them in the lead. But even when they were going toe to toe with Kilkerrin Clonberne, there was this nagging feeling in the back of the mind that the Galway side were not at full throttle.

But they were inflicting serious damage all the same - their constant movement and slick passing dragged Glencar Manor all over the field. Their searing pace ran Manor ragged and then Kilkerrin Clonberne buried them in the second half with an avalanche of scores as tired Manor legs finally gave way under the weight of pressure.

It was a tough lesson for Padhraic Corrigan's side but it may be a valuable one long term. Glencar Manorhamilton have seen, first hand, what it takes to win at this level and as hard as it was to endure, their experience might just be the catalyst for a golden period for an incredibly talented group of players.

One note of caution, Kilkerrin Clonberne won't be going anywhere soon - with ten members of the Galway senior team and an average age of under 25,the Galway women would beat most, if not all, county intermediate teams, they are simply that good!