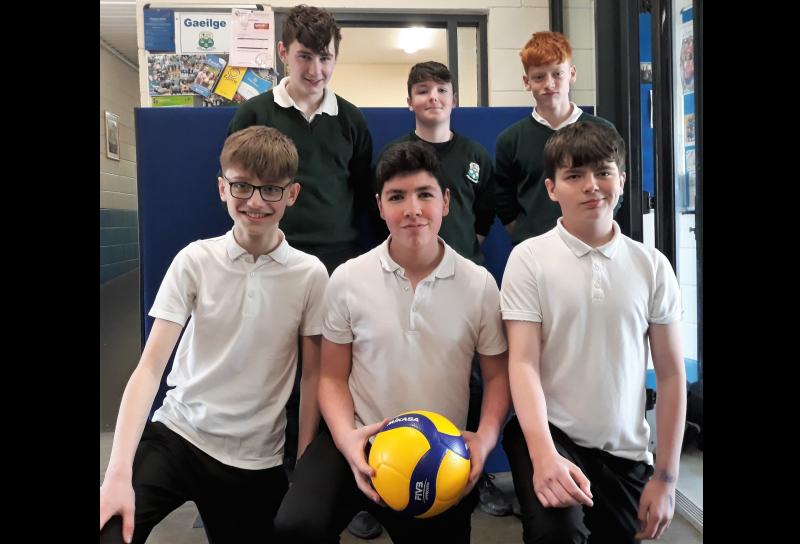 Drumshanbo Vocational School volleyballers have a long history of playing in various locations and various types of schools in Ireland. Last Thursday they added new experiences to that long list.

They travelled to Leopardstown where the country’s most expensive school, the multinational Nord Anglia were hosting the Eastern knockout rounds of this year's Junior A boys.

Finally they faced Sutton Park Dublin, the third most expensive school in the republic, which has out performed Drumshanbo Juniors at volleyball in recent years. Still Drumshanbo kept focused and advanced to the Junior A last 6 for the first time since 2018.

Between bus-lag, the early rise at six am, and playing in a mesmerising massive sports hall, Drumshanbo started this match in a daze with many missed serves. Lucky for them Nord were also dazzled, possibly because they were playing in front of a large home support.

Darragh McCormack, following in the footsteps of his three older brothers, decided to break this flow and, after six strong serves, he put Drumshanbo ahead 16-7. But urged on by the supporters, Nord came back to lead 20-19. Then Jack Beirne (nephew of Hugh, a super enthusiastic Drumshanbo volleyballer of the 1980s,) hit four of his whizzing serves and the set was saved.

Drumshanbo had very few errors in the second set and when Jakub Zapala & Beirne hit five serves each, they led 21-7 With accurate setting from Aaron Gallagher, they eased to victory.

The first set of this game was very close to 14-13. Beirne hit a run of 4 serves and then it was the turn of Brian Nolan to serve six in a row and close out the set. 29 years ago Brian’s father Kevin, was on the first ever Leitrim Sports team to win a Connacht Community Games team final when they won the volleyball final.

In the second set Wicklow led 7-6. Then Zapala hit a run of seven serves in a row. Mark Nolan was at the front for this run and, with great movement, set up others and spiked himself. Mark’s father Neil was on the first ever Drumshanbo VS team to play in a National competition when he was Junior age! James Winters and Daniel Gilrane finished out the serving with three serves each.

Unlike Drumshanbo, Sutton have made the top six of the Junior A championship for the last two active seasons. They were expected to be very tough and this could be seen before the match in their organisation. But two runs of serves, six from Zapala and seven from Beirne moved Drumshanbo 21-5 ahead.

Then, for the first time all day, Drumshanbo ran into serious trouble when, despite a time out and substitution, Drumshanbo lost nine points in a row due to Sutton’s serving. Finally, helped by a spectacular dive from Brian Nolan , Drumshanbo sneaked out to win set 1. Worn out by their brilliant comeback, Sutton fell 7-17 behind in set 2. Ronan Guckian hit a string of very good spikes and despite Sutton outscoring Drumshanbo from there on, the lead was too big.

Drumshanbo VS B faced two tough matches in Kiltimagh last Friday, and, very depleted, it looked like they would be whitewashed as they trailed Kiltimagh A 8-24 in their opening set.

Then Jack Earley, the last player to get playing in the previous rounds, single handedly resurrected the team with a string of long deep serves and showed that no opposition can’t be breached. It seemed he awakened the rest of his teammates, and they fought very hard for the rest of the day.

With Kaelin Spark, Jenson Lawlor, Ben Clarke, Noah Guilouchi and captain Rhionn Gallagher all sick, Drumshanbo started with only two of their first six of the previous rounds. All of this meant they played the day with no subs. Things didn’t immediately improve in the second set either, as Kiltimagh took a 19-9 lead but Drumshanbo contested every point in long rallies.

Pierce McKeon hit seven serves in a row to reduce the lead to 22-19. Zak Winters came into form as he coolly hit eight in a row and Drumshanbo had levelled the match. Zak was to finish with 22 serves unmissed for the rest of the day. The third set was unbelievably close, level eight times to 12-12 but Kiltimagh sneaked it.

Disappointed with losing the previous match, Drumshanbo fell slowly behind in the opening set. The final set was a dinger. James Tighe served them 5-2 ahead, and, with Tighe’s spikes and great net play from Eoghan Connolly and Oisín Lynch, Drumshanbo led 14-9 and 18-15. Earley saved certain winners. But Loughrea made a late rally. Considering all those absent, the last standing six put in a great performance.