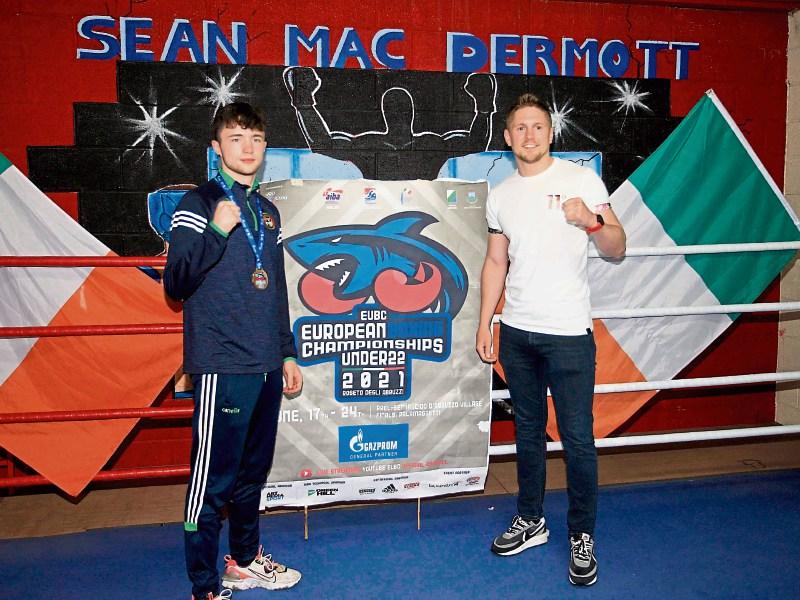 He may have just won a European title but Manorhamilton club boxer Dean Clancy is already setting his sights on the Paris 2024 Olympics as, just two days after a celebration event in Sean McDermott Boxing Club, the Sligo fighter is already back in full training and looking forward to greater challenges after his historic European U22 63 kg victory in Italy.

The small tightly knit boxing community in Sean McDermott Boxing Club in Manorhamilton were joined by Dean’s family and friends last Saturday night for a celebration of Dean’s wonderful achievement, the obligatory tour around the town in between torrents of rain not dampening the excitement and pride in any way.

You know it is a big deal when a World champion walks in the door and he is not the main attraction! But then former WBC-NABF middleweight champion Jason Quigley travelled all the way from Ballybofey in Donegal to join in the celebrations and the warmth of the greetings underlining the camaraderie and friendship in the sport.

And it is clear that Dean has been moved by the reception to his victory: “It is a dream come true, I fell short in two European Championships before so I know what it is like to lose in the final. To actually win a Final, it was a dream come true. Boxing is Ireland’s most successful Olympic sport and the attention I’ve been getting over the last couple of weeks has been crazy and it means a lot to me.

“The support has been crazy the last couple of weeks, people are still contacting me and it means so much to me. It was lovely, the support I’ve been getting is crazy, it is good for me, good for the town and good for Irish boxing,” said Dean who described himself as “Sligo Leitrim - love both!”

It might seem like a long way away but mention of the Olympics in Paris and Dean speaks enthusiastically about his goal of reaching the pinnacle of amateur boxing: “The U22s is such a big tournament, the people in this tournament are priming for 2024. You see the faces that are there, you will see them in 2024, 100%.

“If you take a look at our team, that’s the seed towards 2024. It is like 18 months away before the Qualifiers so I won’t find that coming.” 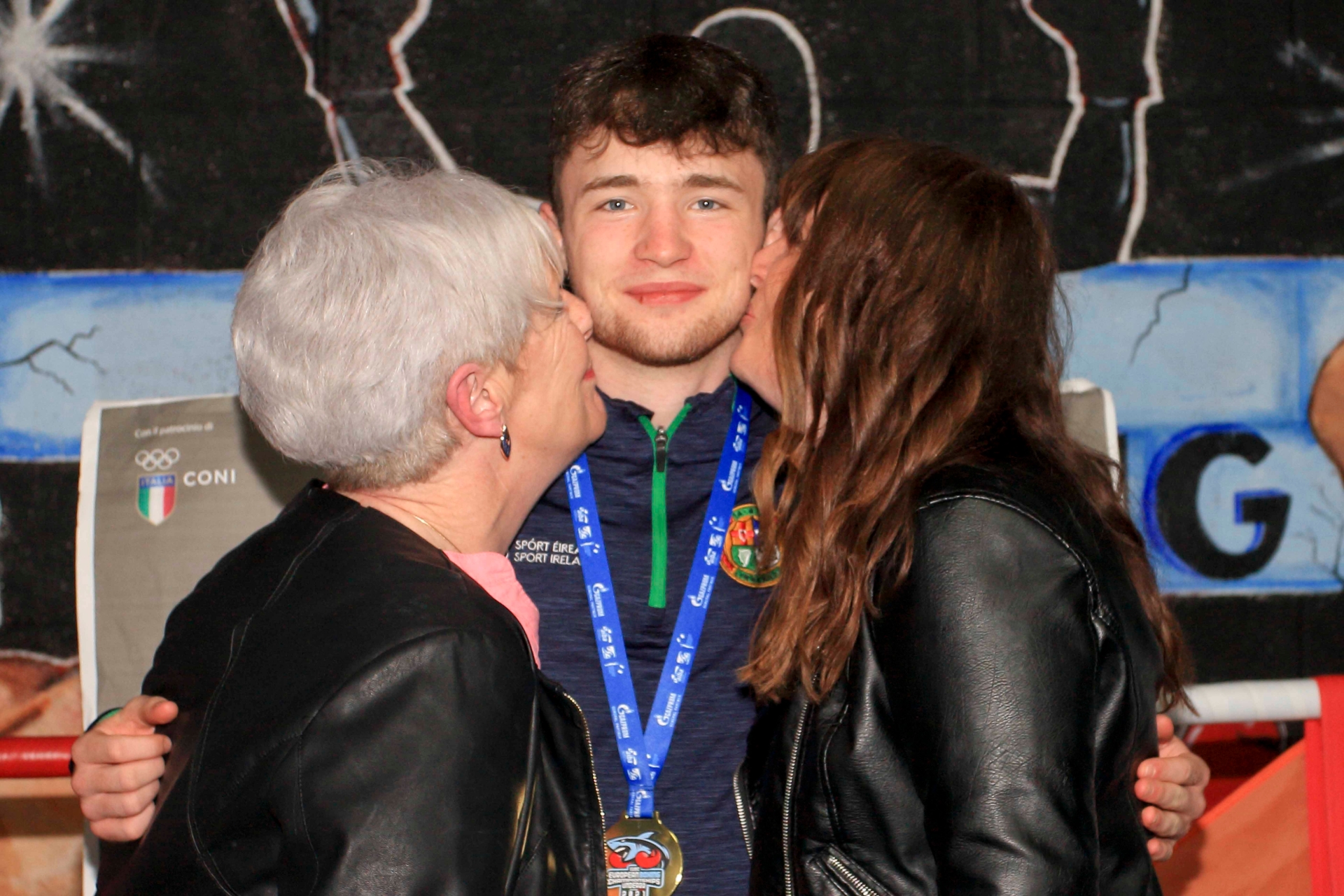 A kiss for the champion! Dean Clancy pictured with his granny Phil Clancy and his mother Georgina at the homecoming at Sean McDermott Boxing Club Picture: Willie Donnellan

Whatever about talking about your ambitions, Dean is obviously determined to back it up with deeds with the Sligo man back in the ring in Manorhamilton last Monday evening: “Going to start training on Monday, put on a bit of weight again because I am still maturing at 64 kg so I’ll be in the gym for a couple of weeks.”

Winning the European title may have been a dream come true but a few minutes spent with the Manor boxer and you can see the fire of his ambition has been flamed by his time spent training with the Irish Boxing’s High Performance Unit, a unit that could easily be dubbed the medal factory.

Dean prepared with the team at the Sport Ireland Campus in Abbottstown, sparring with welterweight Aidan Walsh from Belfast who subsequently booked his place at the Tokyo Games and it is clear the experience has inspired him: “Just being up in Dublin, being around the team, seeing how successful Team Ireland has been in the World Championship in Paris, that was such confidence not only for me but the entire team going in.”

Describing sparring with Walsh as “phenomenal”, Dean spoke of the confidence he gained from the experience: “I did 24 plus rounds with Aidan leading up to his event so that gives me confidence and him a weight above me as well. I wasn’t training for a bit and then jumped straight into the deep end, he was starting to peak coming up to Tokyo.

“He was starting to peak coming towards the end of his camp, he was doing extra rounds. It was three sparring sessions a week and it was jump straight into it, get sharp - it was phenomenal.”

His absence from the ring was down to the impact Covid has had on sports and indoor sports in particular but his break away from the ring brought unexpected benefits: “You’re fighting somebody, you’re definitely not two metres apart!” joked Dean about the impact the pandemic has had on his sport before adding “Obviously I missed boxing, I was out of the ring for 18 months so being in the ring and being in that atmosphere was just fantastic.

“I find that, being in the ring now after such a break, I feel like I am such a different boxer, I was so calm, my whole head space was so calm, collected, I was watching everything. The coaches up in Dublin did such a great job to get us ready. I feel more mature if that makes sense.

“To be honest, I got my first year in college at IT Sligo out of the way and it wasn’t all boxing, boxing, boxing throughout the whole year, I could balance it well. It will be tough next year, balancing it, when Covid drifts away but we will get it done.” 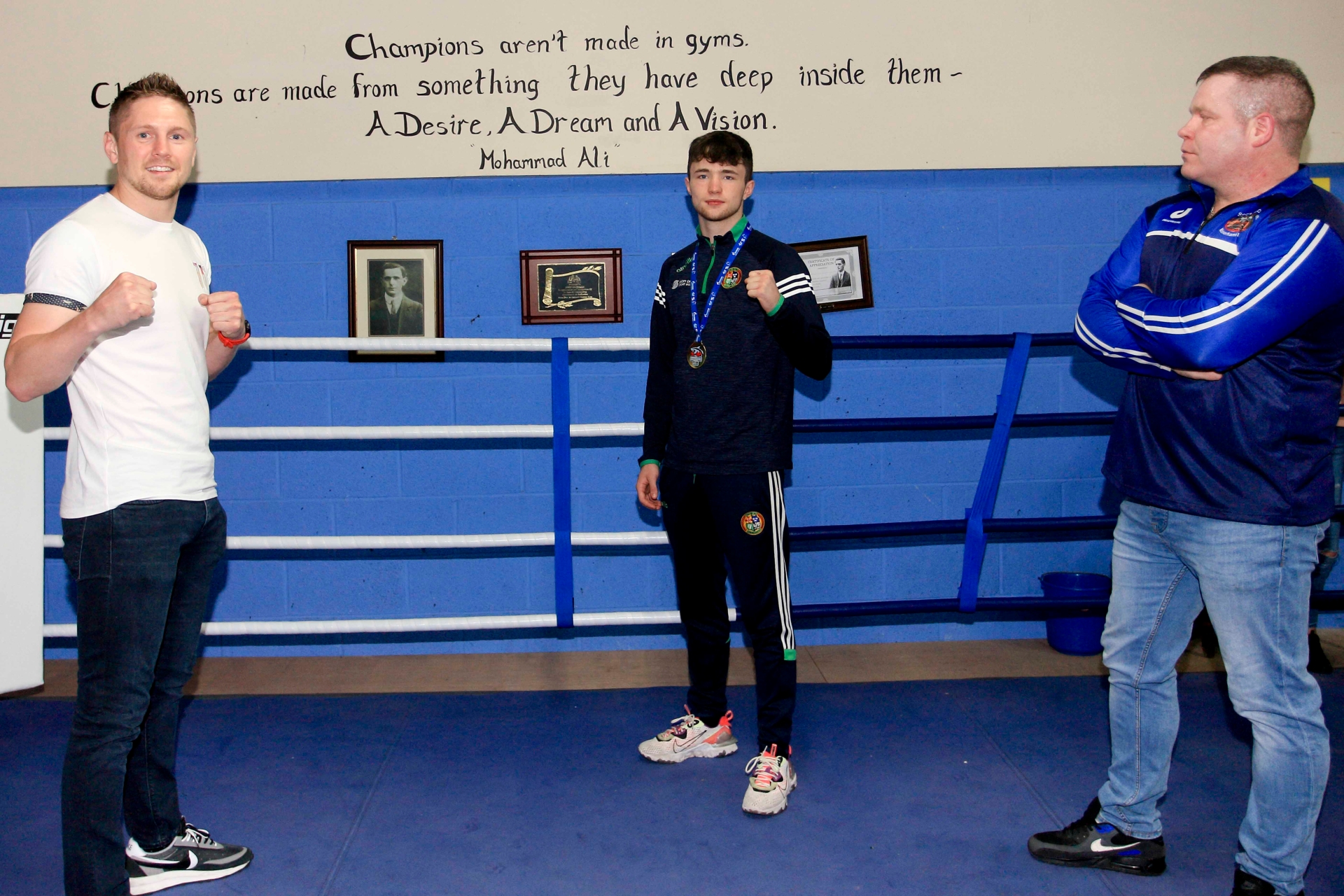 In fact, Dean credits his dad Jason, a native of Manorhamilton who is also his coach, for keeping him going through the trauma of lockdowns: “At the start it was hard, in fairness, I was struggling a bit but with Dad beside me, he got me going, kept at it in the gym, kept doing our bits and then when we got confirmation of a tournament coming up, we were straight into it like I never lost it, I even better, the drive was even greater after missing it for so long.

“The gym in here is fantastic, you can’t beat it and having my Dad here as well, he instills such hard work into me, the core factors into me being successful.”

That drive certainly showed in the European Finals where Dean produced a series of impressive performances to take the title: “I had four tough fights leading up to it, I had the toughest draw. I just went out there to perform, I had moved up two weight classes - I went from 57kg in the 2019 elites, then jumped up to 64kg. It was like I am just going to go out here and enjoy it, do the best I can because that’s the weight I want to go for 2024.

Finally, our conversation circles back to Paris 2024 but qualifying for the Irish team is no easy task. Yet Dean exudes confidence in his own ability as he looks ahead: “The only challenge is myself, that’s the way I’ll look at it. I’ll beat anyone in Ireland at my weight if I train well and perform well, that’s the confidence I have.”