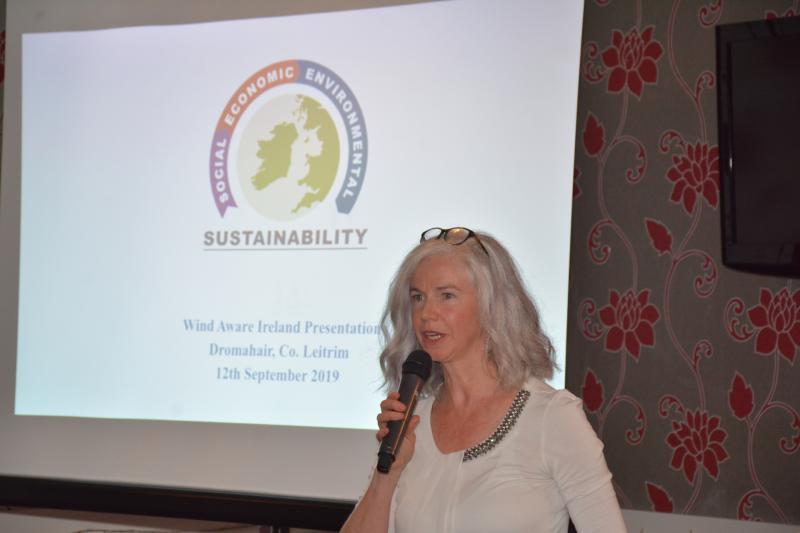 Ahead of an expected planning application from Coillte for the erection of 10 giant wind turbines on Corry Mountain on the outskirts of Dromahair, a public meeting was held last Thursday night in order to outline the various concerns surrounding the proposed development.

There was standing room only in The Clubhouse for the meeting which heard from a number of experts in a variety of fields while the meeting was also attended by local representatives and concerned members of the local community.

Professor Alun Evans, a public health specialist at Queen's University gave detailed information on the impact and effects these 10 wind turbines, which measure 168 metres in height, would have on the area.

Prof Evans explained the larger the turbines, the greater the noise that is emitted - both audible and inaudible noise.
Reference was made to the Irish Wind Energy Development Guidelines 2006 which Prof Evans dismissed saying: “They took the English recommendations and watered them down. They promised to renew them but we are still waiting.”

Prof Evans stressed there is a danger from noise that cannot be heard with sleep disruption being among the most common complaints.

“Sleep is of vital importance,” Prof Evans explained. “When you deprive people of sleep in a laboratory you very quickly get chemical changes.”

He referred to a study carried out in America which showed that the effect of the noise from wind turbines is often worst in small rooms - “typically where small children sleep.”

Jack O'Sullivan addressed the meeting to discuss the potential damage the wind turbines could cause to the environment.

He said he first came to hear of Co Leitrim in 1972. He added: “I learned erroneously that Leitrim soil is rubbish. Misinformation can be very damaging.

“For the industrial scale farmer it is obviously not a good place to be but it is ideal for the small farmer.”

Mr O'Sullivan was very much opposed to the idea of constructing the giant turbines on the top of a mountain, in an area renowned for its natural beauty.

“A few get wealthy but the vast majority suffer through ill health or the loss of a species they are fond of or through damage to the environment.

“I have a serious problem with wind energy. Eirgrid and the ESB used to see themselves as serving people by providing electricity. It created a major social revolution. Somewhere along the way the ESB became an organisation that was told to make profits.”

Mr O'Sullivan concluded by saying: “I think we will find there are very good grounds for lodging an objection when Coillte lodge their application.”

The third speaker to address the public meeting was Dr Paula Byrne from Green Aware Ireland, an alliance of over 50 communities from 22 counties throughout the country.

She called for a “moratorium pending proper independent cost base analysis” in relation to the giant wind turbine farms.
Dr Byrne raised the issue of a bill that Sinn Fein attempted to have signed into legislation. Their proposal was that no turbine should be erected in a setdown radius amounting to ten times the height of the turbine. Deputy Marc MacSharry, Deputy Eamon Scanlon and Deputy Tony McLoughlin all voted against the proposal while Deputy Martin Kenny voted in favour.

Addressing the politicians present at the meeting she said: “The emperor has no clothes. Go back to your parties and ask why is this policy in place; spend money on conserving rather than generating energy.”

Dr Byrne added: “It is really important the community stand behind this group. It's going to cost you a few bob but you have a great group here.”

The meeting, which was chaired by Francie Boylan, was also addressed by a number of the organisers who expressed their thanks to the large crowd who came to offer support. 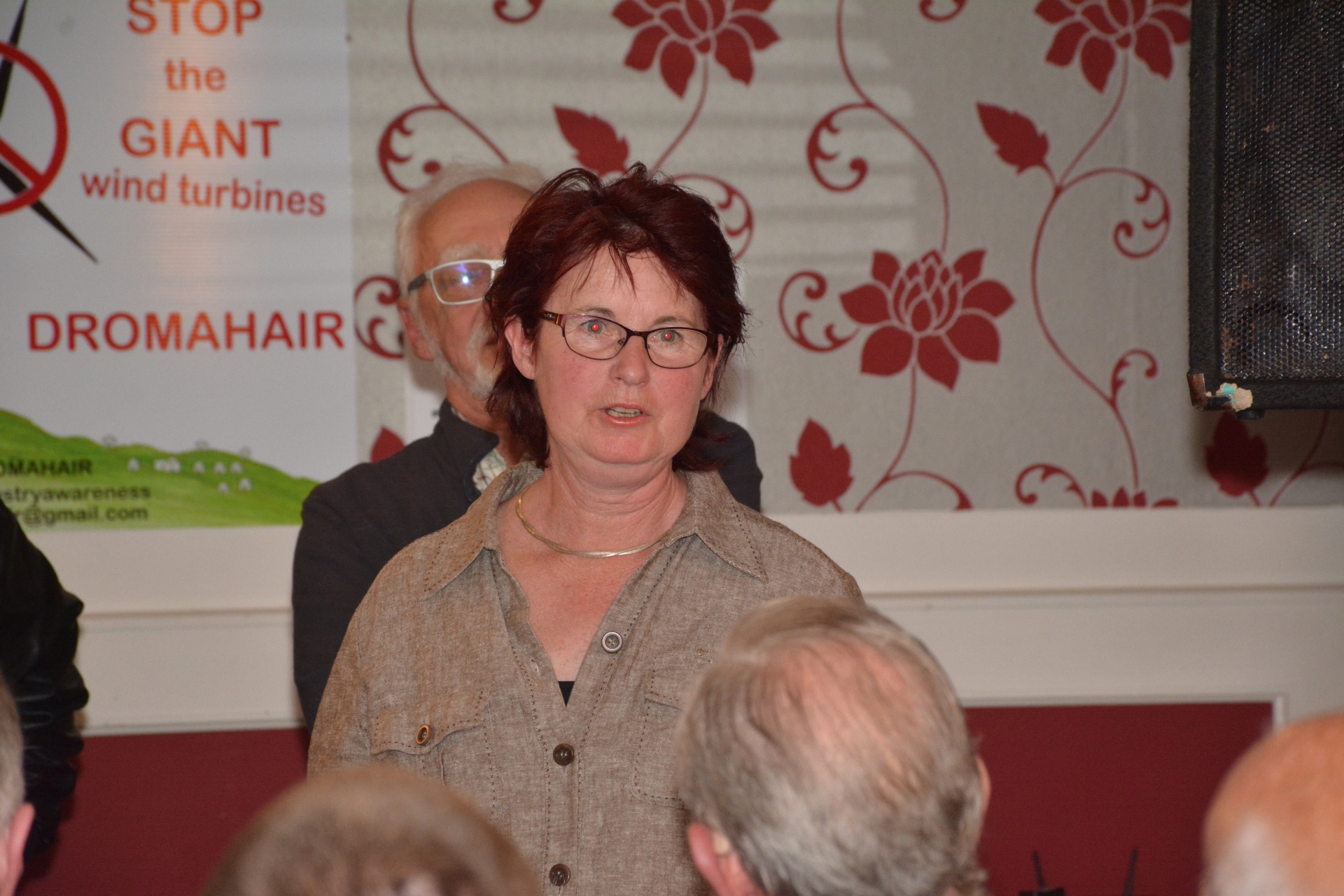 Adrienne Diamond stressed the importance of a united front when she said: “We adore where we live, that is why we are so worried. This is the beginning; Coillte have identified three other sites - that's just Coillte. We have to fight this.”

Another who would be directly impacted should the proposal be given the green light, Kevin Duffy, said: “Were they to go ahead, and I am confident we can stop them, it would be impossible to continue to live in our homes. We would have to turn the key and walk away. 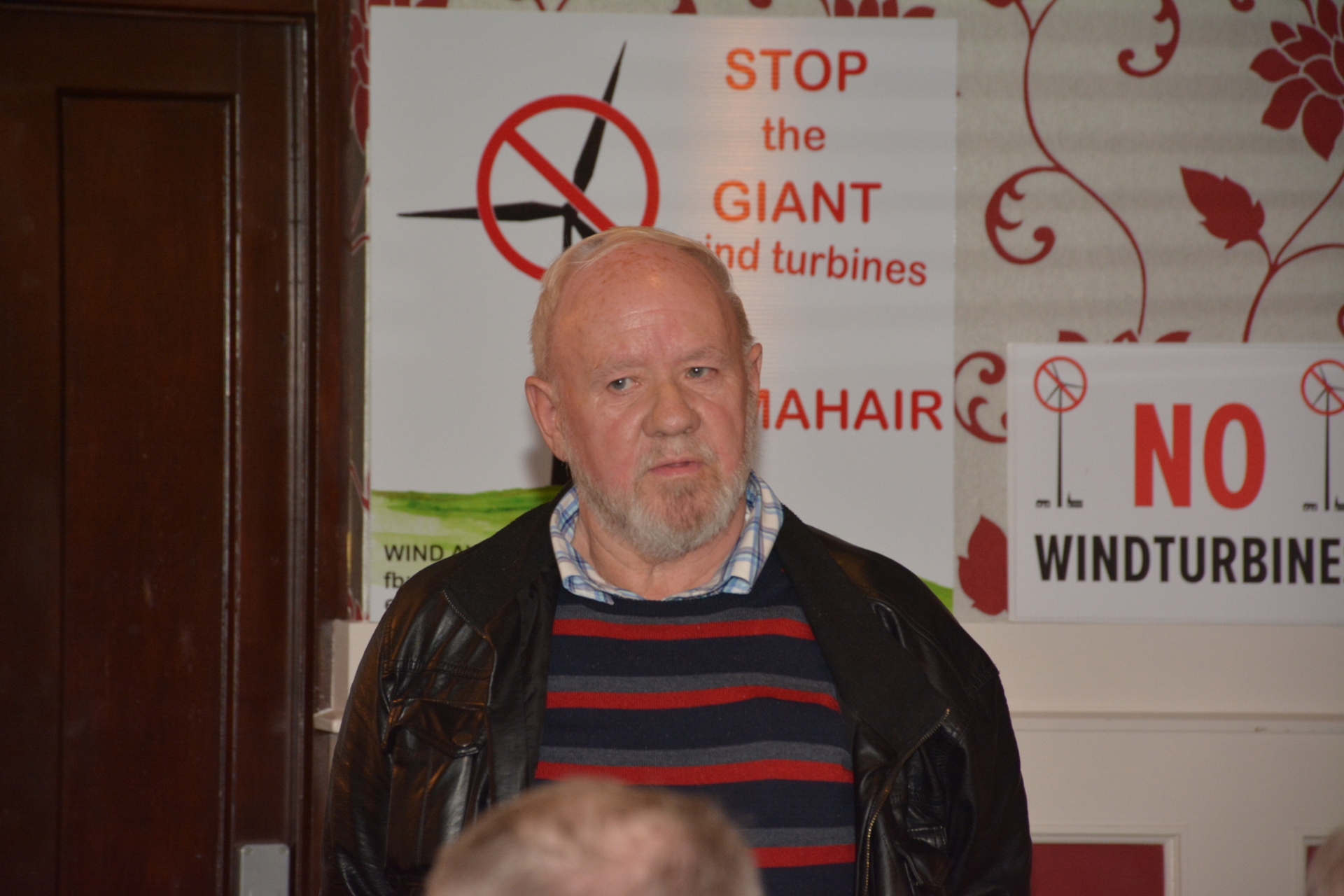 “We proved them wrong before - we did stop the pylons.

“It's a natural tendency to say 'thank God they are not behind my house but they are on the way. Please join our campaign.”