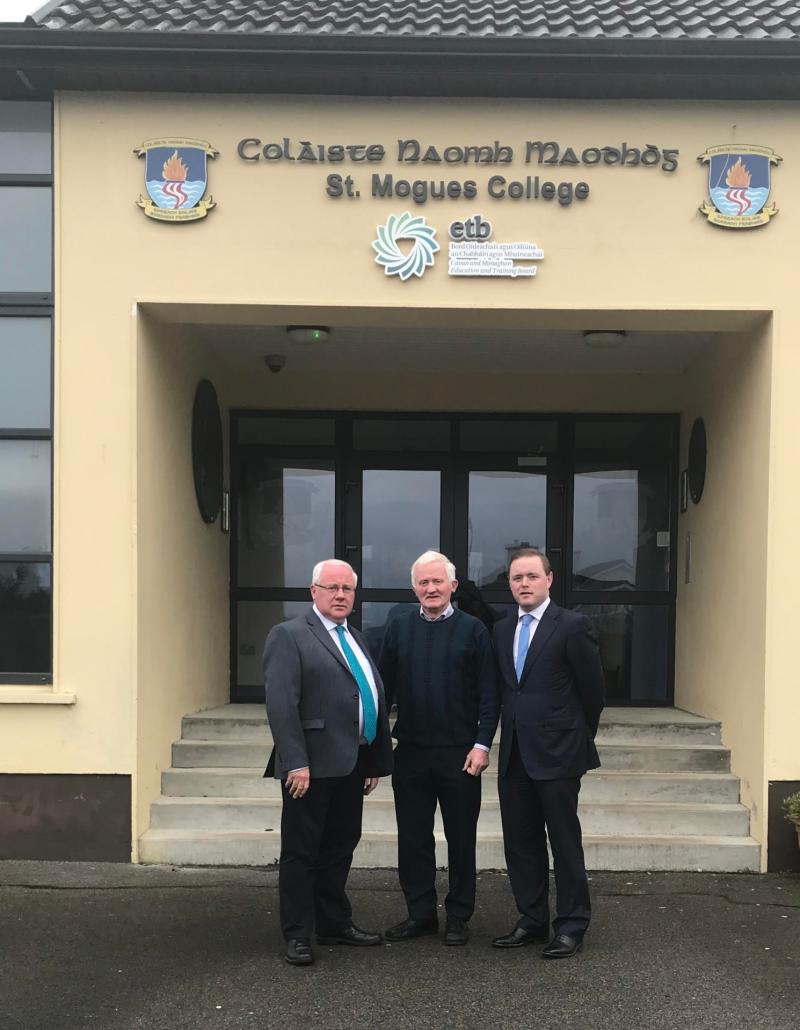 Plans to close St Mogue’s College, Bawnboy and St Bricin’s College, Belturbet and build a new second level school in Ballyconnell, Co Cavan has been called “nonsense” and a “horrid waste of money.”

The plans which were passed at an ETB meeting in Cavan on Monday, November 26 and received support from all parties except Fianna Fáil, could see some West Cavan students take up their second level education in Leitrim Schools.

Deputy Brendan Smith along with Cllrs John Paul Feeley and Sean Smith are vehemently opposed to the plans.
They agree that if St Mogue’s College were to close, pupils from Glangevlin would opt to go to Lough Allen College, Drumkeerin, students from Corlough and Swanlinbar may choose Ballinamore PPS and Carrigallen Vocational School could pick up numbers from their hinterland in Kildallan.

Blacklion Cllr John Paul Feeley said the idea to merge the schools seems to stem from low numbers of enrolment at both schools, but he said investment is needed “not abandonment.”
He said a new school in Ballyconnell would not boost numbers as a large number of pupils from Belturbet will still chose Cavan Town (where there is an option of four schools) while pupils in West Cavan could be disbursed among a number of schools.
He said it was a disgrace that two “fine buildings” would be closed and said a new school would be a “waste of money.”
Bawnboy Cllr Sean Smith said public representatives received a “pontificating” presentation from the Principals and ETB on Monday which on one hand gave glowing review of the schools and on the other said “they are no longer needed.”

Cllr Smith said St Mogue’s site has plenty of room for expanding and another site close by is also ready for development.
He said land owners in Ballyconnell will be “licking their lips” thinking of the money the Department will pay for a school site. The ETB members were told a new second level school in Ballyconnell would cost €15 million.
Cllr Smith said he doesn’t understand why a site 4/5km away would be beneficial to numbers and called it a “horrid waste of money.”

He noted Belturbet had been “decimated” recently and it needs regeneration not further drain of services.
In Bawnboy, “we will have at one end of the village a closed school where there should be a thriving and expanding school and at the other end a Workhouse which is being regenerated through the efforts of the local community. It is ironic that we have a local statutory agency proposing the closure of this second level school while the local Garda Station will be reopened.”
Cllr Smith said public meetings will be held in local communities in the coming weeks and he stated the “public will can trump political will.”

Fianna Fáil Deputy Brendan Smith stated, “This proposal would take the heart out of these communities and have a devastating effect. I cannot and will not support these proposals and call upon the ETB to withdraw them with immediate effect. Instead they should focus their efforts on continuing their support for St. Mogue’s and St. Bricin’s, securing additional capital investment to enhance the facilities and work to provide better budgets for the schools for their day-to-day activities.” Cavan ETB say the new school may be open by 2023.