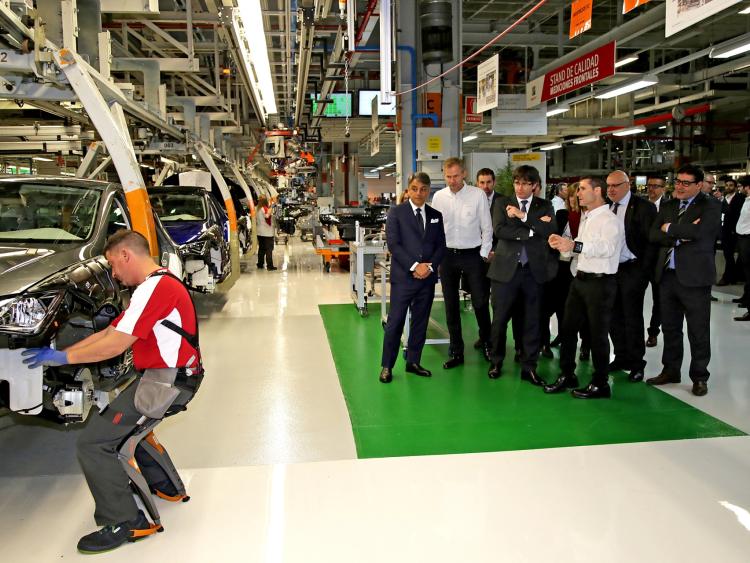 SEAT has allocated 900 million euros to investments and R&D expenses on the new Ibiza and Arona. Company President Luca de Meo made this announcement during the visit to the carmaker’s Martorell facilities by Catalonia’s government President Carles Puigdemont, coinciding with the start of series production of the new SEAT Ibiza. De Meo explained that the total amount of investments and R&D expenses has largely been allocated to the development of both models and to adapting the Martorell factory to accommodate production of these cars. The 900 million euro amount is a part of the global investment of 3.3 billion euros announced in September 2015 for the 2015-2019 period.

According to SEAT President, “this investment demonstrates our commitment to the economic development of the country and confirms our leadership as the largest industrial investor in R&D. We are investing unprecedented figures for the launch of new models. SEAT plays a key role in terms of investment, technology, industry and employment, as well as in generating wealth and prosperity”.

Wholly developed in Barcelona, the new Ibiza is being built on Line 1 in Martorell, the factory which produces the most vehicles in Spain, and it will coexist for a few months with the fourth generation of the model. Built using the new MQB A0 platform, the new Ibiza aims to mark an ambitious turning point in terms of safety, design, performance and comfort. Beginning in the second half of 2017, this same production line will also accommodate the assembly of the SEAT Arona, the company’s new compact crossover. In addition, Martorell also manufactures the SEAT Leon and the Audi Q3.

“Being the first to use the Volkswagen Group’s new MQB A0 platform is a milestone for SEAT and for the Martorell factory. This technology gives us greater flexibility as it enables us to build several models with different body types on the same platform. In addition, by concentrating production volume in a single segment, with the Ibiza now and later with the Arona and the Audi A1, is excellent news for the auxiliary industry as purchasing volumes by national suppliers will increase”, said Luca de Meo.

With over 5.4 million units sold since its launch in 1984, the Ibiza is SEAT’s most emblematic and best-selling model in its history. Sales of the fifth-generation Ibiza kicked off on 7 April and it will reach dealerships in June. The new Ibiza reflects the culmination of a consolidation phase and the beginning of a new period of growth, which coincides with the year when SEAT is launching its largest ever product offensive.

Catalan Government President Carles Puigdemont was greeted by SEAT President Luca de Meo on his first visit to the company’s facilities. Together with the minister of Business and Knowledge Jordi Baiget and the mayors of Martorell, Abrera and Sant Esteve de Sesrovires, as well as several SEAT executives, the group visited the Design Centre, a one of a kind facility in Spain where technology and creativity combine in order to profile the brand’s future models, where they got a firsthand look at SEAT’s future strategy and the new models that the brand will be launching in upcoming years.

The group then went to the Assembly Workshop 10, where Puigdemont, who arrived at the wheel of the new Ibiza accompanied by the President of SEAT, toured the facility where the new Ibiza is being made, and got a close look at the latest innovations being applied by the company in terms of industry 4.0, such as smartglasses or autonomous robots, as a part of its commitment to turning Martorell into a smart factory.

The future of SEAT: sustainable profitability

During the visit, Luca de Meo emphasised the new growth stage that the brand has initiated with new models and the financial results that confirm the company’s road to sustainable profitability. SEAT recently presented the best financial results in its history, with a record operating profit of 143 million euros. The launch of four new models between 2016 and 2017 has resulted in a record figure of investments and R&D expenditure, which last year reached more than 850 million euros. When taken since 2012, the volume totals 3 billion euros.

SEAT is one of the major pillars of Spanish economy and the automotive industry leader, and currently accounts for around 1% of Spain’s GDP and more than 4% of Catalonia’ GDP. Last year the company exported more than 7 billion euros worth of goods, a figure which is over 10% of the total Catalan exports. With more than 14,000 employees in Catalonia, SEAT is the largest employer and generates six jobs for each direct job.

SEAT is the only company that designs, develops, manufactures and markets cars in Spain. A member of the Volkswagen Group, the multinational has its headquarters in Martorell (Barcelona), exporting 81% of its vehicles, and is present in over 80 countries through a network of 1,700 dealerships. In 2016, SEAT obtained an operating profit of 143 million euros, the highest in the history of the brand, and achieved worldwide sales of nearly 410,000 vehicles.

SEAT Group employs more than 14,500 professionals at its three production centres – Barcelona, El Prat de Llobregat and Martorell, where it manufactures the highly successful Ibiza and Leon. Additionally, the company produces the Ateca and the Toledo in the Czech Republic, the Alhambra in Portugal and the Mii in Slovakia.

The multinational has a Technical Centre, which operates as a knowledge hub that brings together 1,000 engineers who are focussed on developing innovation for Spain’s largest industrial investor in R&D. SEAT already features the latest connectivity technology in its vehicle range and is currently engaged in the company’s global digitalisation process to promote the mobility of the future.