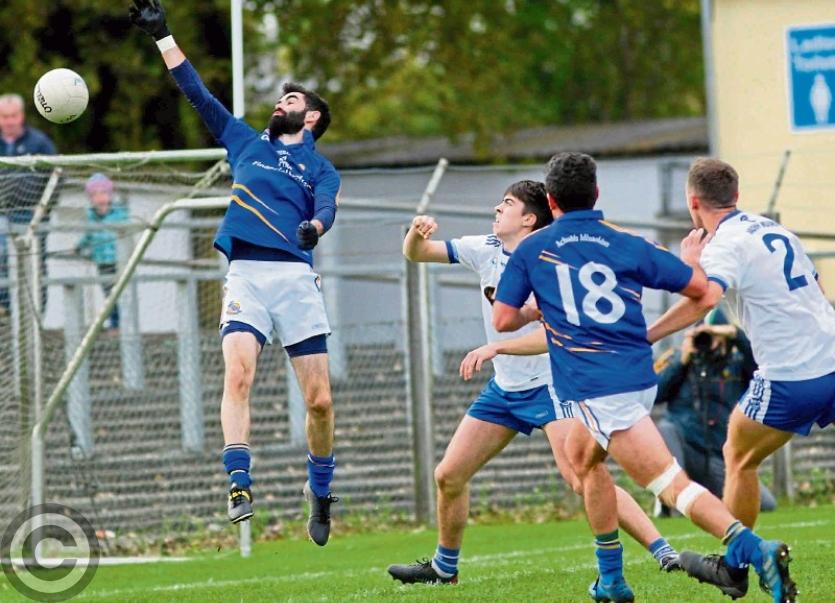 On the face of it a close encounter but in reality, Aughawillan's victory over St. Mary's Kiltoghert last Sunday was every bit as comfortable as Mohill's over Glencar/Manorhamilton.

The two point margin at the end belies just how dominant Aughawillan were for long periods and only for some wasteful finishing and last ditch defending from St. Mary's, this should have been a stroll for the Willies who are going for their third title in five seasons.

Aughawillan were at their imperious best on Sunday. The outstanding Pearse Dolan & Mark Plunkett dominated the midfield battle and upfront Ciaran Gilheany and Gary Plunkett ran riot, the workrate and support play of the Willies simply in a different class.

Defensively, Aughawillan creaked a little but in Fergal McTague, they had a full-back who dominated and gave his backline a degree of security as the winners never allowed St. Mary's to build the sort of running game that has proven so effective this year.

St. Mary's will have huge regrets when they look back on this one - they never got going, or weren't allowed to, and the fact they made it so close at the end is a testament to their quality but they will also know that Aughawillan were the better team by far.

Alan Doherty opened the scoring from a free on four minutes, quickly cancelled by a lovely stylish score from Ciaran Gilheany. Doherty put a free wide before James Glancy got a yellow card for a challenge on Gary Plunkett, Morgan Quinn converting the free.

Aughawillan almost broke through for a goal and should have had one when Morgan Quinn dispossessed James Glancy close to goal. Instead of passing to a team-mate next to him, he fisted the ball across the goal but Daniel Lowe got to it ahead of Noel Plunkett.

Gary Plunkett hit a wide but handling on the ground at the other end after Colin Maguire got to the ball ahead of Daire Farrell allowed Alan Doherty convert the free on 13 minutes. Again, Aughawillan hit back straight away, Pearse Dolan winning the kickout before finding Mark Plunkett who lofted the ball high and long between the posts.

The crucial score came on 17 minutes when Niall Beirne got in behind the Mary’s defence to get his hand to a Gary Plunkett ball, keeper Conor Glancy unable to prevent the ball from finding the net.

St. Mary’s hit back with an excellent Gary O’Daly point but it was temporary respite as Ciaran Gilheany fired over two lovely points in the space of a minute, Gary Plunkett setting up the second before going close to a second goal as his powerful shot was tipped over the bar by Conor Glancy.

Ray Mulvey swapped points with Mark Plunkett but just when they were looking beaten, St. Mary’s got themselves back into the game, Daire Farrell gathering a Nicholas McWeeney long ball behind the defence but firing confidently to the net on 27 minutes.

Aughawillan almost had the perfect response but Ciaran Gilheany’s shot was cleared off the line and Sean Quinn hit a wide as the Willies led 1-7 to 1-4 at the halftime interval.

Mark Plunkett missed a long free early in the half but the more costly miss came at the other end when Jack Matthews got on the end of a long ball and worked a great chance but pulled his shot wide of the far post.

From that missed chance, Aughawillan worked the ball to Rory McTague for a lovely point. The pace of scoring slowed considerably with ten minutes before the next score, a Morgan Quinn free and six more until St. Mary’s sub Jack De Lacy fired over after a short free. Mark Diffley then added a free and incredibly, St. Mary’s were now only a goal in arrears with ten minutes left to play.

Crucially, the next score came from Aughawillan, Mark Plunkett converting a free after a foul on himself and it was doubly important for, in the next minute, St. Mary’s got the goal they so desperately needed, Jack Matthews keeping the ball alive near the endline before finding Diffley for a killer finish.

With only a goal between the teams, we saw Aughawillan’s greatness assert itself - momentum was with Carrick but it was Pearse Dolan who set up Gary Plunkett for a classic point and two minutes later, Ciaran Gilheany finished a brilliantly worked move with a great point.

So in the space of three minutes, a one point lead was turned into a three point gap and Aughawillan could defend in numbers. They did that but they also broke at speed and actually had more wides than St. Mary’s before the finish, butchering one goal chance when they had a three-on-one situation.

St. Mary’s kept trying to work a goal but never got near one, a Ray Mulvey free cutting the lead to two points. The last meaningful action saw Mark Plunkett soar high into the air to catch a high ball and Aughawillan sealed their place in the final.

Talking Point: St. Mary's may feel they never got going but Aughawillan never let them, dominating midfield and driving   back Carrick's strong halfback line. They might worry about their accuracy as they hit some bad wides but what really stood out was they did it with just 15 players and no subs - quite a remarkable achievement in these days of the extended squad game.

Ref Watch: A good outing for Eamonn O'Grady. He might have booked Daniel Lowe for an early challenge but he made the big decisions and kept up well with play.

Highlight: Hard to pick from the fielding of Pearse Dolan and some of the excellent scoring produced by Ciaran Gilheany, Gary and Mark Plunkett.

Lowlight: A lot of bad misses over the course of the hour, particularly from Aughawillan, is not what you want to see from Senior football.