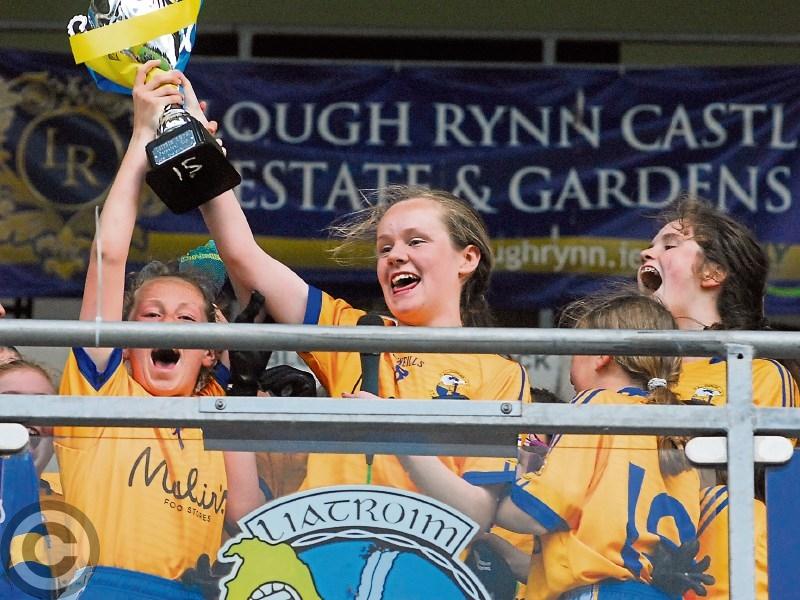 Glencar/Manorhamilton claimed the Ladies U14 15-a-side title on Monday when they proved far too clinical and organised for a wasteful St Mary's Kiltoghert in Avantcard Pairc Sean Mac Diarmada.

Three goals in a three minute burst midway through the second half turned this game on its head and gave victory to a Manor side who showed much better finishing instincts than their Carrick opponents.

Glencar/Manor opened the scoring with a goal in the first minute, Amelie McGrath working herself free to score under pressure. Aine McLaughlin followed up with a point but St Mary's soon hit back with points from Ellie Butler, Blaithin McCrann and Ellie O'Brien.

But Carrick celebrations were short-lived as the next attack led to a second goal for Manor, Allie White showing great poaching instincts to divert a long ball past a helpless Emmanuela Olabiyi in the Mary's goal.

Eimear Keaney scored a fine point on nine minutes with teammate Elle McMorrow stretching the north Leitrim team's lead with a point, although she could have gone for goal.

St Mary's dominated the final quarter: Ellie Butler got the ball rolling after a good run from the powerful Emma Clarke. Michaela Gallagher had what looked like a good point waved wide while Allie White got a good point for Manor. Rebecca O'Neill, Ellie O'Brien and Sarah Lowe each added a point before the break to give St Mary's a 1-8 to 2-4 halftime lead.

Glencar/Manor had a few early chances in the second half but White and Megan Rooney were both denied, Rooney's shot hitting the crossbar and bouncing down on the line. St Mary's then took over but couldn't score as they hit four bad wides from good positions.

And they were made pay for those misses in spectacular fashion as Manor broke free and Elle McMorrow scored a good goal. Glencar/Manor had a goal ruled out for a square ball but that didn't stop them as Eimear Keavney found the net seconds later.

Amelie McGrath added a third goal in as many minutes and with that the game was over, St Mary's keeper Olabiyi very unlucky as she made two wonderful saves but saw the rebounds planted in the net.

A Megan Rooney cross led to Manor's final score with nine minutes left, McGrath getting her hat-trick and all that remained after that was a late Ellie Butler point for St Mary's in added time.

MAIN WOMAN - Lots of big performers for Glencar/Manor, from Anna Devaney in midfield to the excellent Elle McMorrow, Megan Rooney and Eimear Keaney in attack while Aoife Maguire, Lauren Devaney, Shauna Fallon and Mary O'Brien stood out in defence.

For St Mary's, Emmanuela Olabiyi in goals made a series of outstanding saves, Emma Clarke and Blaithin McCrann were impressive in midfield and Ellie O'Brien the best of the attack.

TURNING POINT - Elle McMorrow's 41st minute goal came after an intense period of Carrick pressure but crucially no scores. The goal opened the floodgates as the Manor girls hit three in as many minutes to kill off the contest.

TALKING POINT - These two teams have dominated in recent years but Glencar/ Manorhamilton's ability to make the most of their chances was ultimately the difference between the sides.

REF WATCH - A bit of confusion over a score disallowed for St Mary's that looked over the bar from the viewpoint of the press box but referee Kieran Moran was adamant in his decision and kept good control on the game.