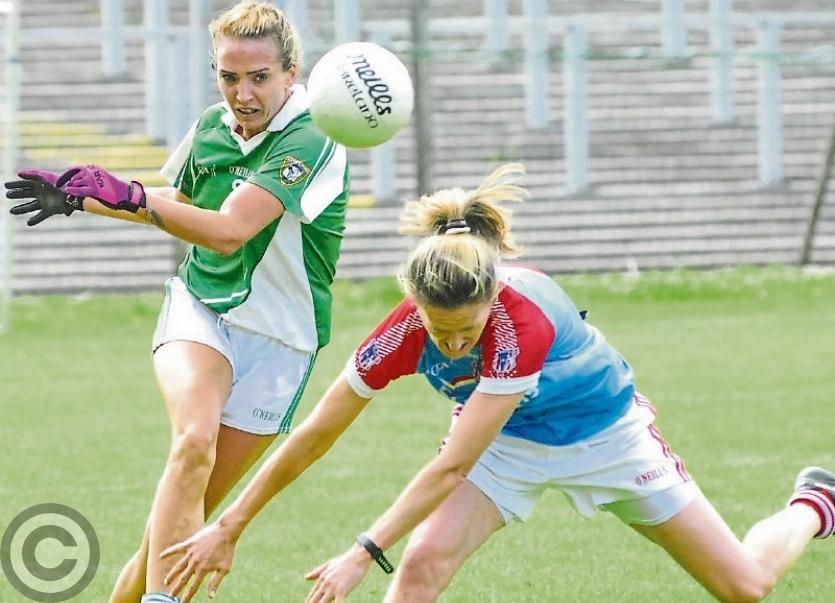 Inspired by the leadership and scores of Ailish Cornyn, St Francis turned the tables on Mohill to take the honours in the Ladies Division 2 Final last Sunday in Avantcard Pairc Sean Mac Diarmada.

Mohill had been the dominant side in the first half with slick team-work and some great scores, Dearbhaile Beirne in particular proving almost unmarkable. But crucially, Mohill were unable to find the net and St Francis made them pay.

When we say St Francis, we could be far more specific and say Ailish Cornyn as the former Cavan star scored her entire tally of 1-4 in the first half and it was these scores that proved vital in the second half.

St Francis’ second half dominance wasn’t built on their attack but rather their defence vastly improving their performance and shutting down the Mohill attack, holding them to just two points.

With St Francis giving Mohill far less room and halting their attacks at source, two goals from Dara Morahan & Roisin McGrenaghan proved enough for a wasteful St Francis side who could have had another three or four.

Mohill got off to a good start and had three different scorers on the board by the sixth minute with Gemma Stenson, Emma Quinn and Dearbhaile Beirne all on target with an Aine Flood score in response. Tanya McPartland tapped over a free after St Francis looked as if they might have had a penalty.

They didn’t have long to wait for a goal and it was the impressive Ailish Cornyn who got on the end of a brilliant move involving Tanya McPartland and Aideen McKiernan to blast home a fabulous goal.

Mohill’s response was impressive with a Beirne free and another Stenson point putting the sides level after 15 minutes. Ailish Cornyn scored a wonderful 50 yard effort but two Beirne points had Mohill back in front with seven minutes left in the half.

Cornyn and Beirne swapped points before Cornyn saw a blistering shot hit the crossbar before going over for the equaliser. From the kickout, St Francis again won possession with Cornyn again scoring.

St Francis almost broke through a goal with Caoimhe McGarry seeing her shot blocked by the keeper but Tanya McPartland put over a free to leave St Francis leading 1-7 to 0-8 at the halftime break.

St Francis started the second half with a real bang when Dara Morahan did incredibly well to get onto the end of a high Aine Flood shot that fell short and despite the presence of the keeper and a defender, Morahan won the ball, turned sharply and blasted the ball to the net from a tight angle.

Aine Food put over a free on seven minutes and a great St Francis lead got even better ten minutes into the second half when Rachel McLoughlin won the ball in defence and a fabulous kick passing move that went through three players and ended up with Roisin McGrenaghan sending a rocket to the net.

Mohill keeper Michelle Hackett made a good save from McGrenaghan while Dearbhaile Beirne fired over two points in a ten minute spell as injuries and bad misses from both sides took whatever pace there had been from the game.

Mairead McCawley ended a 16 minute spell without a score for St Francis with a fine point while sub Ciara McTigue got on the end of a great move to leave nine points between the teams.

And despite nearly ten minutes of added time, there was only one more score with Tanya McPartland firing over eight minutes into added time to leave St Francis comprehensive winners.

MAIN WOMAN -Ailish Cornyn was immense for St Francis, her scores were vital in keeping her team in touch with Mohill during the first half. Tanya McPartland was excellent as was Stephanie Reynolds, Niamh Morahan, Caoimhe McGarry and Eimear Gibbons. For Mohill, Dearbhaile Beirne was outstanding and the focal point of the attack while Deirdre Ward, Sarah Doyle, Charlene Tyrell, Emma Quinn, Niamh Beirne and Michelle Beirne al put in excellent displays.

TURNING POINT - Ailish Cornyn's goal was crucial in keeping St Francis in contention during Mohill's dominance in the first half but Dara Morahan's goal just after halftime gave St Francis the confidence to dominate the second half and run out easy winners.

TALKING POINT - It might seem like St Francis' attack won this game but in reality, it was the vastly improved defensive showing that proved vital as they closed down what had been a fast moving and dangerous Mohill attack.