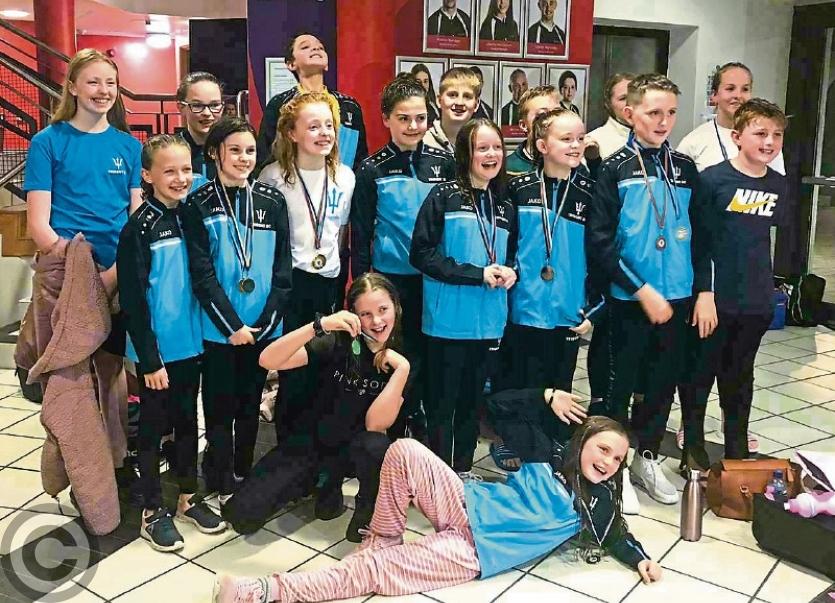 The Trident Team in Athlone

An 18-strong squad from Trident Swim Club travelled to the Regional Sports Centre in Athlone last weekend to take part in the first development gala of the season. After an early start to training back in mid-August, the squad were well-prepared and ready to test themselves against their peers from other clubs in the region.

The first event was the Girls’ 11 and Under Backstroke with Aoibheann Harmon taking the B gold with a time of 1:36.87, Phoebe Lynott taking B Silver in 1:37.07 and Lily McWeeney narrowly missing out on a medal but still getting her B time in 1:42.44, with a personal best (pb) of almost 10 seconds.

Cormac Rynn ended the Backstroke category in style for the 14 & over boys, achieving his ‘A’ time in 1:16.50 with a very impressive 11 second PB.

Next up was the 200m Breaststroke event with Phoebe Lynott gaining her first ‘A’ time in 3:51.41, nearly 10 seconds inside the qualifying time. Sophie McKeon followed close behind taking the B gold in 4:01.55 and Aoibheann Harmon taking the B Silver in 4:02.51, both narrowly missing their ‘A’ times.

Also representing the 11 & under Girls was Emily Quinn who achieved her B time in 4:15.10.

The final event of the day was the 100m Individual Medley with the U11 Girls up first. Phoebe Lynott achieved a time of 1:37.15 with a pb of almost six seconds to take the B silver.

18 swimmers, 34 pbs, 21 medals and 6 ‘A’ times - not a bad start to the season for Trident! With a heavy competition schedule ahead including the Connacht Minor Schools Championships and the Regional Qualifying Meet in Castlebar, training continues at full pace for the club over the coming weeks.