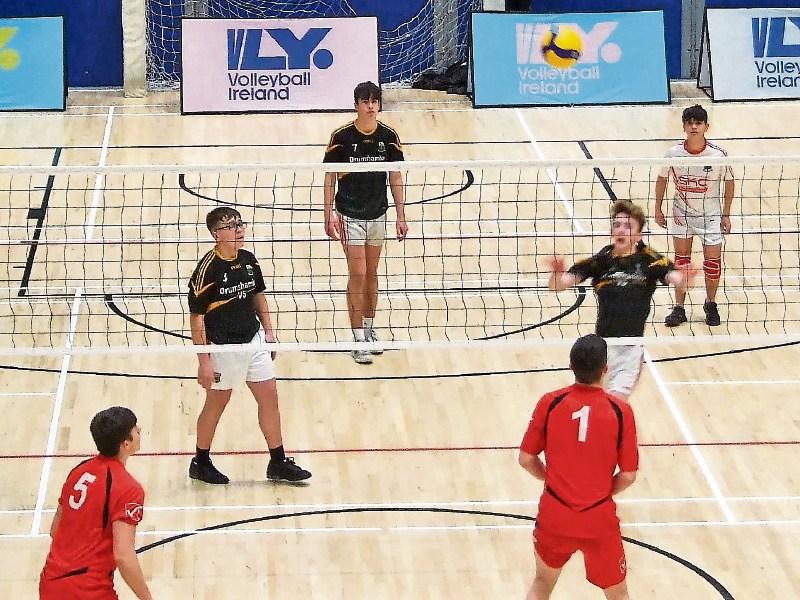 Cathal Guckian gets the ball across the net with, from left, Karl Winters, Adam Casey and Andre Paratti waiting

For the 30th consecutive year, excluding the season of 2020/2021 when all sport was wiped out due to Covid, Drumshanbo Vocational School have their record of reaching an “A” Boys national final.

The top eight schools converged on the University of Limerick in an abridged Covid season campaign on Wednesday, December 15, with Drumshanbo Facing five matches on a day that started before 6am as they made their way to UL.

Match 1: The bleary eyed Leitrim boys were overwhelmed by a St Brigid's Loughrea panel, double champions of recent years who could sleep-in to 8 am but unfortunately Drumshanbo slept through a 9-25 drubbing!

Match 2: The inexperienced Drumshanbo knew that the three favourites were Brigid’s, Elphin (who also won their opening match 25-9) and Sutton Park Dublin who won their 25-6! But from the start, this was a different Drumshanbo team.

The two stars were two of the most inexperienced. Aidan Dowler, was introduced for this match. His setting was near perfect throughout. Drumshanbo led 3-0 and, after Sutton levelled, his serves put Drumshanbo 7-3 ahead. 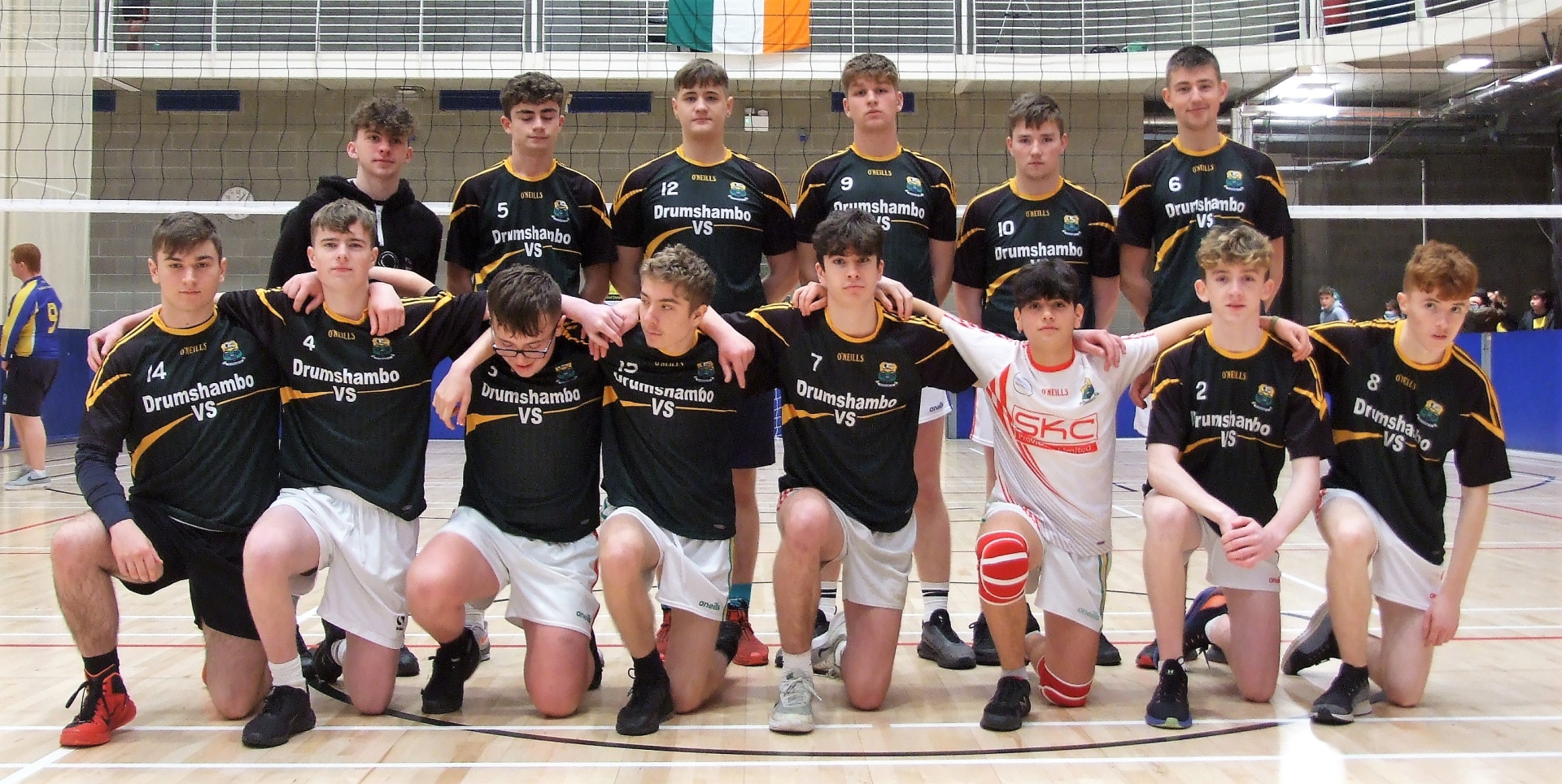 Sutton levelled at 8 and there followed a very tight battle and led 16-15 until Dowler served Drumshanbo to 19.

The other star was Andre Paratti. New to the school, his libero work throughout the day was a revelation but particularly in this match where he frustrated Sutton by being everywhere. Drumshanbo restored their pride with an impressive win 25-19.

Match 3: Overconfidence is dangerous. Next opponents were newcomers Coláiste na hInche from Bettystown Laytown in Meath. They had been thrashed by Sutton but they shocked Drumshanbo as they led 2-0, 4-2, 7-3.

Match 4: Quarter final: What a start for Drumshanbo. Cathal Guckian served eight in a row and, with Winters powering at the net. Drumshanbo led 7-1, 10-3 and 15-5 as Adam Casey with serves and perfect sets, hit top form. St. Raphael's Loughrea rallied to 15-10 but the day's revival was complete as Drumshanbo held out to win 25-16. 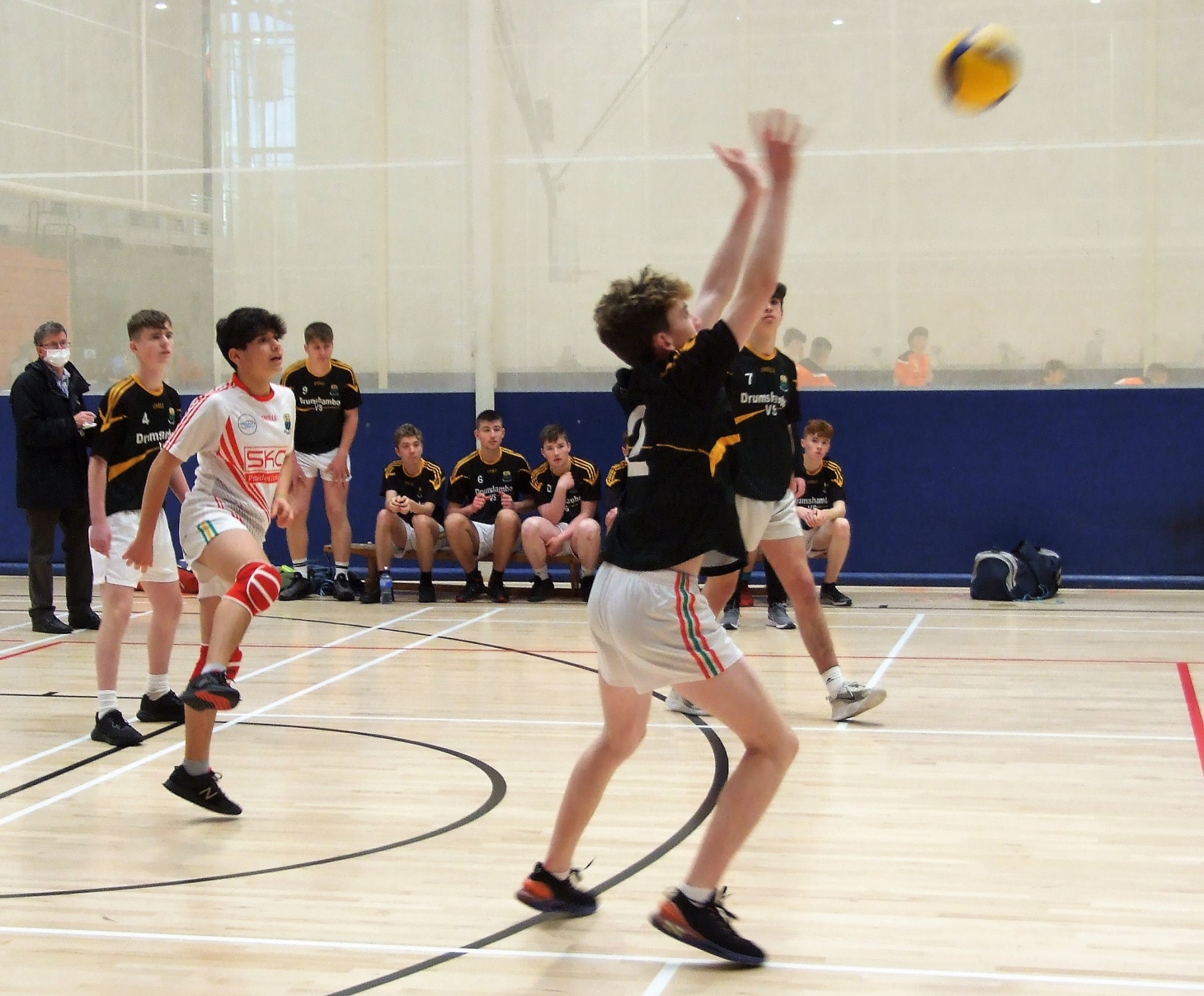 Match 5: Semi final: Now Drumshanbo faced Elphin who, unlike Drumshanbo with none, had five of their six players who featured in the cadette final of two years ago. It was a different paced game. Elphin dumped and placed balls everywhere and then hit killer spikes. Drumshanbo defended very well and only trailed 7-9.

Then Declan Main stepped up to serve. He served Elphin to 18-7 ahead, through two Drumshanbo time outs and a raft of substitutions. Still, at 8-23 down Igor Krups hit a great winning spike and Drumshanbo ended the set strong with their final combination.

Set 2 was a great finish for Drumshanbo. Dowler served strong and Winters hit a purple patch as Drumshanbo led 5-1! Elphin came back but Winters hit a fabulous spike to level it at 8-8. Unfortunately, it was too fast for the referee who judged it out, and Elphin went on to lead 10-8.

Karl Foley, who was an excellent setter and defender all day, served Drumshanbo 11-10 ahead. But Elphin battered their way to 17-13. There followed an extraordinary rally that went on and on. Young cadette Pádraig Kane was outstanding, getting to impossible Elphin attacks.

But Elphin prevailed in that crucial test. Drumshanbo never gave up but Elphin reached their first senior A final in 14 years. There they took the first set 25-20 against Brigid’s but it was not to be for them. They really sparkled against Drumshanbo to win 25-12 25-17. It was a great game for both teams.