Ballinasloe too strong for Carrick Seniors 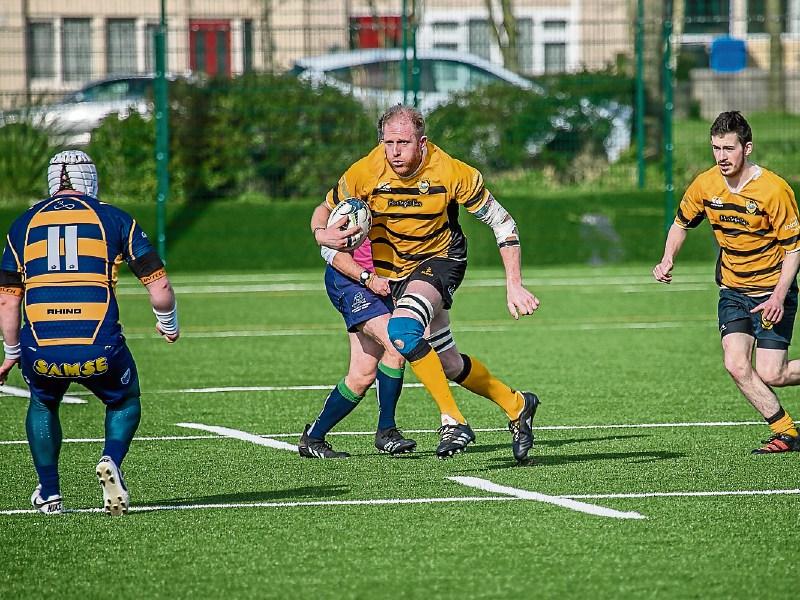 Darrach Patterson on the charge for Carrick RFC against Ballinasloe Picture: Mark Kelly

Carrick played with the strong wind in the first half and from the start attacked the opposition line with gusto but great rucking, mauling and tackling by Ballinasloe kept Carrick out until eventually Carrick got through with a try by Denis McCaffrey converted by Ruairi King.

However Carrick then failed to control the restart and Ballinasloe swept through to score their first try, unconverted. A further two penalties and a converted try by Ballinasloe by half time meant Carrick had an uphill battle in the second half playing against the strong wind.

Carrick gamely tried to salvage the game but turnovers won by Ballinasloe ended up being kicked downfield in the wind giving an easy attacking position. In the end the Ballinasloe defence remained steadfast and it was all too much for Carrick who had their lines breached three times in this half to leave Ballinasloe comfortable winners.

League champions Carrick U14s started their Connacht Cup campaign with a 29-12 win against Loughrea at Longford RFC to qualify for the quarter finals. Every member of the Carrick squad played composed rugby on a bitterly cold day. Full respect to Loughrea who never gave up and fought through to the end.

Carrick scored five tries with Charlie Slevin, Sean Gaffney, Alastair Hewson, Jack Moolick and Luke Charles, who got on the end of a fantastic piece of skill from Jack Prior, all crossing the whitewash with captain Moolick converting all the tries.

Carrick RFC recorded an excellent win over Loughrea RFC at the County Galway ground on Sunday morning. After the long trip West, Carrick started slowly and lost their captain Jayden Bosomtwe to injury in the opening minutes of the game.

On 15 minutes Carrick conceded a try when the Loughrea attack broke through the Carrick defensive line to score under the posts. Loughrea failed to add the extras however and the score seemed to shock the visiting team into life and with Niall Stenson now taking over as Captain, Carrick began to grow into the game.

On 28 minutes as the first half was drawing to a close Carrick began to exert real pressure on the Loughrea rearguard and a huge Carrick drive led by Tristan Hoey resulted in Daire Shannon driving over in the corner. Peter Moran added the touchline conversion to lead the visitors two points ahead at the break.

The second half saw Carrick dominate the opening exchanges and gained territory with the highly influential Hoey and Stenson causing major problems for the home side. After good work by Bobby Hanrahan, Carrick won a five metre scrum and from the resulting set piece, Niall Stenson skillfully avoided two tackles to score near the corner. Moran missed the extras.

On 47 minutes Carrick scored the try of the game. After great work by Marco Fallon Alonso and Alan O’Beirne Carrick made huge inroads into the Loughrea defensive line and stand-off Ben O’Connor found Tristan Hoey who broke two tacklers to score under the post and his first points for Carrick.

Ben O’Connor added the extras leaving the score 19-5 as the game entered the final 10 minutes. With five minutes remaining Bobby Hanrahan who won a turnover on the half way line and beat a number of defenders to score in the corner to leave the final score 22 to 5 to Carrick RFC.