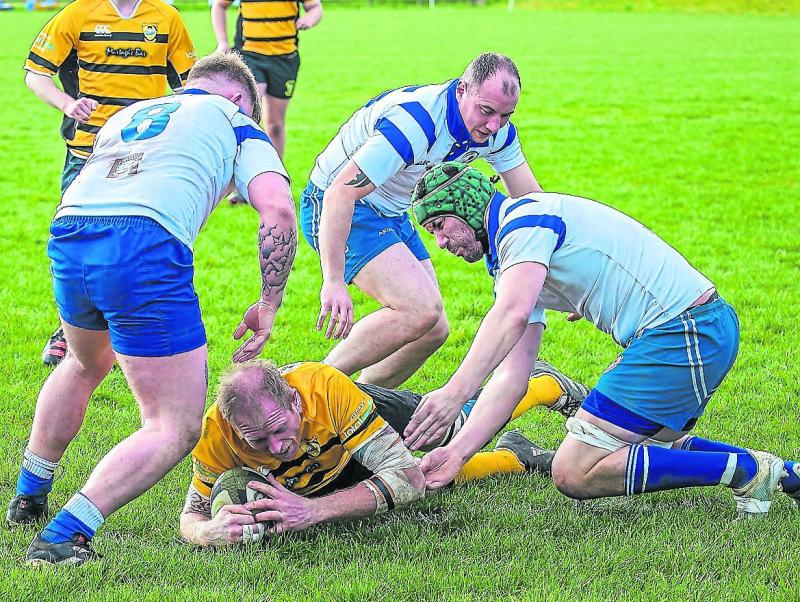 On a glorious afternoon at Castlecarra, Carrick RFC saw off their Galway opponents Our Lady's Boys Club (OLBC) to secure a place in the J1C Cup Final at the Sportsgrounds in Galway next weekend.

Carrick started the game with an unforced error at kick off which allowed the visitors take an early three point lead. That setback forced Carrick to focus on their game and they began to dominate proceedings, dominating multiple areas of the game including the scrum battle which resulted in a penalty on 12 minutes.

From the line out a huge carry from the Joaquin Cueto Puente allowed Carrick to break the visitors defensive line and some slick interplay between John Healy and Stephen Guckian allowed Brendan Davis set Brian Finn free to score in the corner, Ruairi King converting.

Carrick continued to take the game to their visitors but ill discipline allowed the visitors to reduce the deficit to just one point on 25 minutes. On 34 minutes Carrick won a penalty inside the visitors 22 which resulted in a yellow card for the visitors winger.

From the resulting penalty Captain Shane McGuinness elected to go for a scrum and the ageless Darrach Patterson broke to score to leave the half time score 12-6 to the home side.

Carrick continued to make some uncharacteristic unforced errors which clearly frustrated coaches Sean McKeon and Tom McGuinness. With Dermot Foley and Darrach Paterson continuing to impress in the loose Carrick failed to make their superior fitness and set piece count which allowed OLBC reduce the lead to three points on 57 minutes.

Thankfully for the hosts, Ruairi King added a penalty on 65 minutes to leave the final score 15 points to 9 to the Carrick men and a Connacht Final awaiting.

Carrick U15s reached the Connacht Plate semi final with a hugely entertaining 34-26 win over Loughrea RFC on Saturday in glorious sunshine. Carrick started slowly and allowed the home side to score on 12 minutes.

This stirred Carrick and on 16 minutes, a huge carry from Jayden Bosomtwe saw Carrick moved the ball to Tristan Hoey who freed Peter Moran to score in the corner with the conversion missed. On 22 minutes, outhalf Ben O’Connor set Cathal Enright free to put the visitors ahead for the first time.

As the half came to a close, some poor handling in midfield allowed Loughrea an attacking scrum and the home side broke the Carrick men’s resistance to leave the visitors behind by four at half time (14-10).

Carrick begin the second half with real gusto and the introduction of David Chen saw the visitors move the wide for the Drumshanbo man to score in the corner and restore the visitors lead by one point. Carrick were dominating exchanges which enabled Ben O’Connor to receive a long pass from his half back partner Luke Creighton to score in the corner.

Carrick failed to add the extras and even though they were 20-14 up were struggling to put an end to the home sides resistance.

On 48 minutes Loughrea scored their third converted try to leave the minimum between the teams. Carrick were losing their discipline and from a field penalty and crossfield kick, Loughrea had their fourth try. Crucially the missed conversation meant the Carrick men were only six points behind (26-20) as the game entered the final minutes.

With their season on the line the Carrick boys rose to the occasion as Bobby Hanrahan broke from outside the Loughrea 22 to score under the post and with O’Connor adding the extras and time running out, Carrick were in the lead with 2 minutes remaining 27-26.

From the restart the highly influential Tristan Hoey carried from inside his own 22 and evaded what seemed like the entire Loughrea team to score under the post to send the Carrick boys into the plate semi in two weeks time.